Their liquor license revoked, John Slaughter Jr. and his family can't have any involvement in The Keg for two years, nor can they work for an establishment that sells alcohol. 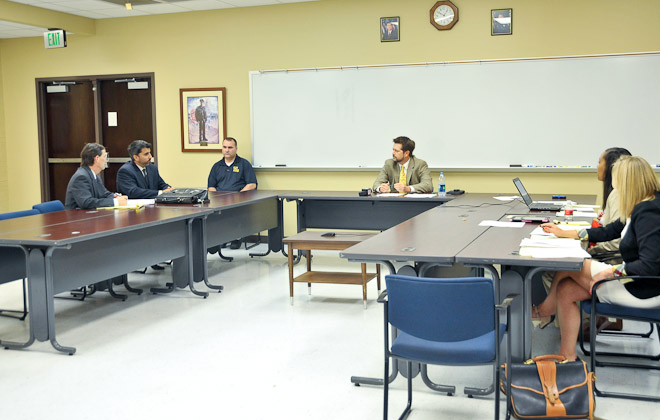 Keg manager John Slaughter Jr., second from left (with his attorney Michael Hesse), was dealt a big blow Monday by ATC Commissioner Troy Hebert, center, for selling alcohol to minors: He and his family are banned from The Keg for two years and cannot have ownership in or work in any establishment that sells alcohol during that period.

[Editor's Note: This story has been extensively updated with new information from the ATC office.]

A fifth offense of selling alcohol to minors, the most recent totaling five counts along with five additional counts of having minors on the premises, has done The Keg's John Slaughter Jr. and his family in - at least for two years. On Monday the Slaughters lost their liquor and tobacco licenses for two years and also were assessed a $15,000 fine.

Alcohol and Tobacco Control Commissioner Troy Hebert tells The IND John Jr.'s parents, John and Hilary Slaughter, own the business with John Jr. serving as manager (John Jr. was previously misidentifed by this publication as the owner).

The two-year liquor license revocation for the owners is the toughest penalty allowed by law, Hebert says. (An earlier version of this story incorrectly stated that the license could have been permanently revoked.) Hebert also could have revoked the license of the premises but did not because the owners of the real estate at 115 McKinley St., McKinley Strip Investments LLC, according to property tax records, are not involved in the business.

The fate of the Slaughter family's McKinley Street pub, a popular college hangout located near UL Lafayette in the area of town known as The Strip, and three other local bars hung in the balance as Hebert held administrative hearings at Louisiana State Police Troop I headquarters in Lafayette today.

The Slaughters, who are locked into a long-term lease costing them $5,700 a month, can't in any way be part of the business during the two-year restriction period. The ban includes any other Slaughter family members, Hebert notes, explaining that John Jr. and his parents also cannot have ownership in any establishment that sells alcohol, nor can they work for one during that period.

The family's only option is to find someone to sublease The Keg, but that person or entity must go through the application process to get a liquor license, Hebert says.

The ATC commissioner says he tried repeatedly to work with The Keg, which was cited four times in the past year, three in the last six months alone, and thought he had gotten through to the business in December.

Following its Dec. 13 closure and $10,000 fine last year (the result of a three-month sting operation that cited about 16 additional Downtown bars in November), The Keg reached a consent agreement with the ATC to improve its compliance record and re-opened Jan. 13. Hebert thought that would be the end of the problems, but a tip from a concerned parent led to another investigation and subsequent raid on April 17, netting multiple citations. Those violations breached the consent agreement and led to an emergency suspension of The Keg's liquor license.

While the majority of the Downtown bars cited late last year and in other investigations "have learned a lesson," Hebert maintains, a handful, like The Keg, did not. Late Monday afternoon, he sent out a press release on the outcome of hearings involving three other local repeat offenders.

- Tuffy's Quick Stop 2 at 1737 N. University Ave. had its permit revoked for two years for fifth offense alcohol sale to an individual under the age of 21.

- Jersey's Daiquiris Sports Bar at 811 Albertsons Pkwy., Ste. P in Broussard, was assessed a $5,000 fine for its third offense alcohol sale to a person under 21.

- Arcadian Bar and Grill at 302 Jefferson St. was assessed a $5,000 fine for its third offense alcohol sale to a person under 21.