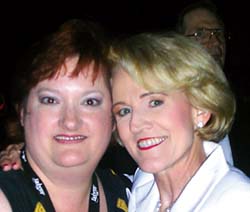 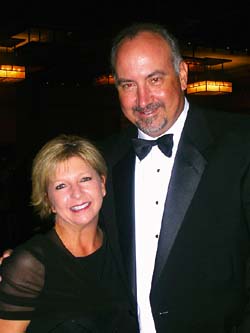 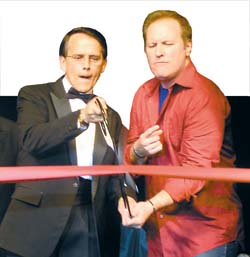 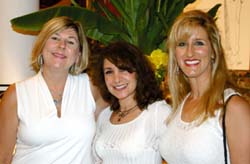 The much-anticipated opening of L'Auberge du Lac Hotel & Casino in Lake Charles was the place to be on May 26, mes amis. With her media pass in hand, Party Girl headed west that night to see what's got everyone talking. I was hit with a whirlwind of champagne, ice sculptures, spa treatments, lobster, steak and some gambling. Just like Vegas! Upon arrival, guests were greeted by 40 staff members, some dressed in full show biz-revue attire, followed by a black-tie preview event, a concert by country star Collin Raye and the largest fireworks display in Louisiana. The hotel opened to the public at 10 p.m. that night, and y'all should have seen the line of people waiting to get in. It must have been three city blocks long! After all that excitement and a good night's rest in my elegant hotel room, Party Girl was ready for her relaxation massage complete with hot stones. Wendy Kennison is the girl for this, y'all! In addition to attracting some gamblers from Lafayette, L'Auberge has also hired some locals. Chef Jason LeBouef from Hotel Acadiana will be developing recipes for the casino's Jack Daniel's Bar & Grill, and Wes Milligan, formerly a writer with Acadiana Profile, will switch gears to manage more than 2,500 employees, create a magazine for the casino and plan its social events. Don't forget to invite Party Girl, Wes!

While I had a fabulous time in Lake Charles, Party Girl can't stay away from the charitable events in her hometown for long. Back in Lafayette, Family Violence Intervention Program held its annual Feast & Follies fundraiser at the City Club last month, with its own local Vegas-style entertainment. Director Cathy Broussard and her daughter Ashley outdid themselves! Blond bombshell Marilyn Monreaux made an appearance, followed by "The King" Shawn Roy as Elvis Presley. Elvis had his own "Sinsational Sisters" backing him up. After everyone got all shook up, the delightful gospel group In Jesus' Name calmed everyone down, and Brad Broussard took the floor for some Boudreaux & Thibodeaux jokes. Just when I thought the event was winding down, Shawn wooed his ladies once again with a Rodgers & Hammerstein number that was the icing on the cake!

Despite all these festivities, we still have to fit into our bathing suits this summer, and the upcoming Games of Acadiana is the perfect way to support a good cause and get in shape. Gearing up for its event August 20, the Games unveiled its 2005 collector's edition poster at Studio One 2 One during the May ArtWalk. Designed by John Perret of 3 Wize Monkeez fame, the poster incorporates the monkeys and was also influenced by the work of Earl Hebert. It's quite fitting that Perret was chosen as the artist this year, as he was the uncle and godfather of Miles Perret, for whom the games are dedicated. The invitation-only event served hors d'oeuvres and cocktails before the start of ArtWalk and included some 300 people. Party Girl left with a signed poster, of course.