In a season of festivals there was yet another at Lamson Park over the weekend. 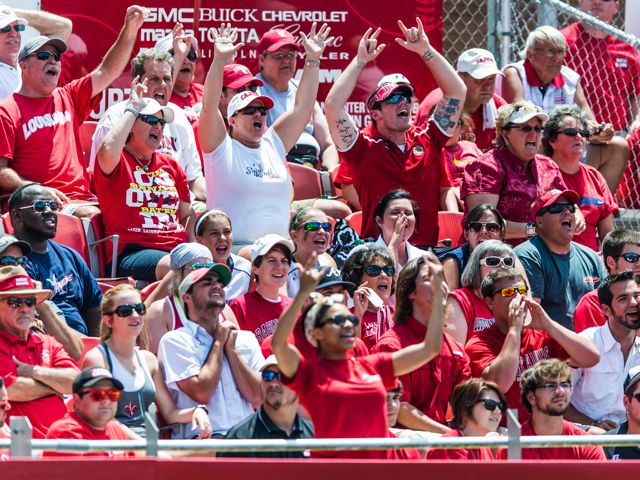 In a season of festivals there was yet another at Lamson Park over the weekend. Instead of music or food, the main attraction was the NCAA Division 1 Softball Regional and Louisiana's beloved Ragin' Cajuns. Like the best festivals, the crowds grew over the three-day event until by Sunday the venerable stadium was overflowing from the grandstand to the oak-shaded bleachers. The Cajuns did not disappoint, sweeping three games and earning Super Regional hosting privileges for the first time. UL will host Arizona for a best-of-three series starting Friday. The winner will advance to the World Series.

The Regional victory did not come easy. In Friday's first game against No. 4 seed Texas Southern, the Cajuns jumped out to a 6-0 lead by the third inning only to allow the Tigers to crawl back to 6-4 in the top of the fifth. After the game, Coach Michael Lotief was apologetic. The game, he said, "was won in spite of coaching." To avoid tiring pitcher Christina Hamilton, Lotief had relieved her in the fourth. Three walks and one out later Hamilton re-entered the circle where she remained for the rest of the weekend. The final: Cajuns 7 TSU 4. Meanwhile No. 2 Texas edged No. 3 Mississippi State 1-0 for a much-anticipated matchup.

Saturday's crowd was electric. Shellie Landry's mother led cheers as she did all weekend and the fans responded. So did Shellie, who went five for nine for the Regional, scored four runs and drove in two more, one with her bat and one with her body. The first Cajun run Saturday was forced in after Landry was hit by a pitch. Afterwards, she said, "If you believe in yourself you can make anything happen."

Belief was a necessity against the Longhorns. The Ragin' Cajuns had not had much success against the Longhorns, according to Lotief, "since their senior class [the second most successful in Texas history] were freshmen." In fact Texas had already outscored UL twice in Lamson Park this season. But the Longhorns beat a different team. Lotief admitted later the 2014 Cajuns had nearly driven him to seek spiritual assistance. "We were ugly in the fall," he said. Preseason wasn't much better: "We had players in the wrong positionsEven a month ago, if you had asked me, I would never have expected this team in the Super Regionals."

Saturday's game led them there. Texas took a 2-1 lead into the top of the seventh and expected another score when Kendall Smith's diving catch in left field saved a run and retired the side. Smith's defensive gem generated momentum that carried through the bottom of the seventh. Lexie Elkins walked before consecutive singles by Samantha Walsh, Shellie Landry and Shelbi Redfearn tied the score. With one out, Sara Corbello fouled off what seemed to be a dozen pitches while the crowd's insanity reached clinical levels. Her patience, good eye and bat control paid off with a walk-off walk. Final: Cajuns 3 Texas 2. Texas had its own dramatic come-from-behind victory over Mississippi State in Saturday night's elimination game to set the stage for Sunday's rematch.

Including those standing in the bleachers 2,158 fans jammed Lamson Sunday for a total attendance of 10,050 over the weekend. The guy who Saturday had been handing out Christina Hamilton replica eye glasses must have exhausted his supply because he was nowhere to be seen. But Hamilton showed up as she had every game. She described her team as "a sisterhood ready to fight to the end." No one fought longer or harder than she. Hamilton was in the circle for 20 and two-thirds innings of the 21 innings the Cajuns were in the field.

The game, although closer than the final indicated (UL scored five in the seventh), was decided early. In the second with game scoreless and three Cajuns on base, Lotief pinch hit Gabby Felps for Natalie Fernandez. Finding Bobby Jindal in the Governor's Mansion would not have been a bigger surprise.

Fernandez leads the team in batting average (.437), on base percentage (.538) and she ranks second in all-time UL career batting average. Felps would be making her first appearance in the Regional. Lotief later explained, "I asked Natalie if she would be all right with letting Felps hit. With Felps it was all or nothing. I knew if she gets it in the gap" Felps' single drove in two runs. Lotief described Felps' clutch hit as "very appropriate. A lot of kids [got] the opportunity to come through." A two-run homer in the third by Redfearn seemed to seal the deal, especially with Hamilton in complete control. Elkins added two home runs, Kelsey Vincent another and a Super Regional in Lafayette was assured.

Lotief recognized the significance of his team's accomplishment. "We were softball before softball spread across the country, so it's good to [host] a Super Regional. This community, this university, this fan base deserve it."

They all can thank the "sisterhood" for making history.

TICKETS
Ragin' Cajuns softball season ticket holders will have first priority in purchasing tickets
Seats will be allocated based on 2014 RCAF Annual Fund Donor Level
All seats will be assigned
Tickets for general public will be available beginning Thursday, May 22