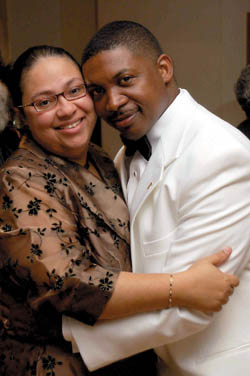 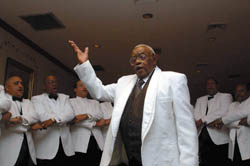 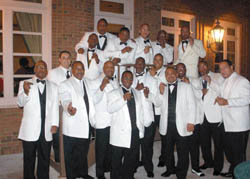 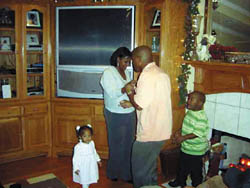 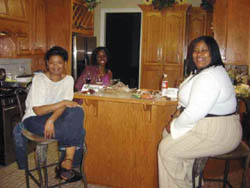 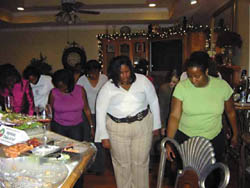 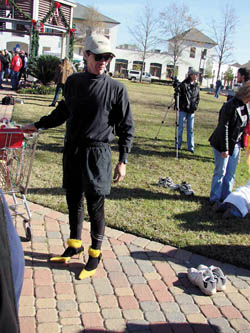 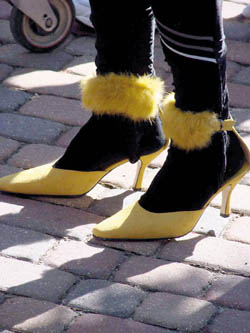 The New Year is off and running, but Party Girl is still reliving all those holiday events. On Dec. 4, the Alpha Phi Alpha Fraternity met for a private gala dinner at Le Triomphe to mark its 100th anniversary. Members and spouses enjoyed a five-course meal with live entertainment provided by August Heat. As souvenirs, the members received personalized bottles of Champagne with designer flutes, a commemorative Christmas ornament with the fraternity's crest, custom cigars, and fresh yellow roses for the ladies. Among the guests was Brother Pipkin, a member with more than 50 years of active membership, who also led the rest of the members in a moving rendition of the fraternal hymn. After dinner, the men gathered on the balcony at Le Triomphe to partake in a brotherhood smoke with their new cigars, while other couples such as Shawn and Rodricka Wilson enjoyed a moment on the dance floor. Said chairman and immediate past state director Shawn Wilson, "This was an excellent way to kick of the Christmas season and another century of leadership and service. We are first of all, servants of all, and we shall transcend all."

Speaking of transcendent, wine and zydeco are all it takes to get Party Girl in the dancing mood. On Saturday, Dec. 23, Johnell and Tiffany Thomas and friends of the couple had a wine sampling social. The hosts, Johnell and Tiffany Thomas, prepared their home with more than delicious food and festive conversations ' they made room for a dance floor. After sampling wines and champagnes, partygoers concentrated on their fancy footwork with the zydeco shuffle. Bringing in the New Year with great cheer were Thomasine Batiste, Margues Batiste, Jeneva Ruffin, Cindy Duhon and Quintella Baskerville. Other guests who had their dancing shoes on were Jennifer Kelly, Danielle Davis, and Tannie Alexander. Watch out girls, Party Girl will be ready for next year's Holiday Wine Social, and I promise to have mastered the zydeco shuffle by then. I say this should be an annual event!

Speaking of fancy footwork, Party Girl praises our pal Mike Dehart, who brought the old saying to life: "You can't really understand another person's experience until you've walked a mile in their shoes." In late November, Dehart and other fellow men decided to give their feet a real test of strength at the "Walk a Mile in Her Shoes" event to benefit Stuller Place. Thanks to the compassionate men who lent their support to women battling cancer. I tip my hat to all the participants and hope to see y'all walking again next year.