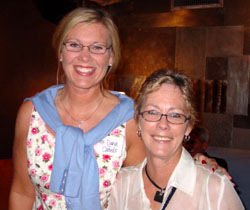 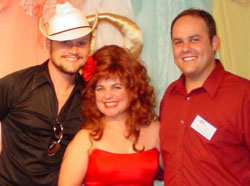 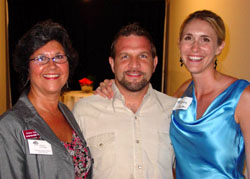 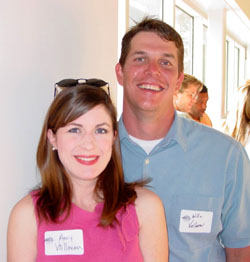 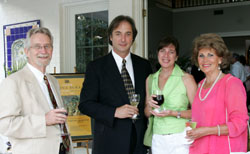 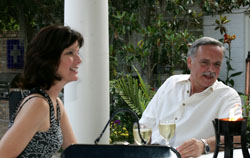 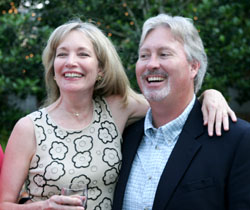 The Lafayette "divas" got together at Zea recently to celebrate Jenn Adcock's 30th birthday. The girls, who formed their diva group last year as an excuse to get together for some girl talk, enjoyed drinks and dinner before heading to the movie theater to see Monster in Law. Party Girl wasn't too sure about this chick (or is that chic?) flick, but Jane Fonda's still got it y'all. Not only does she look awesome for her age, but she plays a mean mother-in-law. Helping Jenn celebrate were Ellen Fruge, Moon Chang, Johanna Villarreal, Marie Collins and honorary diva Anna Mary LeBlanc. Jenn's and Ellen's husbands play with Roddie Romero & the Hub City All-stars, so the girls have plenty more diva events planned for when their husbands are away. Keep Party Girl posted, girls!

Getting all the business owners and key players downtown together is no small feat, but Downtown Development Authority's David D'Aquin managed to plan quite a party. About 200 attendees packed the Acadiana Center for the Arts June 9 for the unveiling of plans for new developments downtown. The crowd got a glimpse of the plans for Jefferson Street Apartments, to be located across from Keller's Bakery. (Party Girl may have to relocate there to continue keeping a close eye on the party scene.) The excitement continued with Amy Waguespack and her theater troupe performing in the Art House and Renella Rose Champagne and Edison Figg singing in the small gallery. And the spread of food from almost every restaurant downtown was just overwhelming! Eggplant casserole from Dwyer's, fried plantains from Guamas, petit fors from Keller's, turkey and sausage jambalaya from T-Coon's ' all in one evening. Party Girl wasn't the only one in the food line though. Henry Florsheim, Kimberly Schuler, Berry Kemp, Jennifer Grand, Ben Berthelot and Melanie Lewis also had a great time, and Michele Ezell sure got a workout carrying trays of Tsunami sushi back and forth from the kitchen. David tells me more networking events are planned for downtown. I'll see y'all there!

Deserving a big congratulations is Chorale Acadienne, which recently received the Governor's Arts Award for Outstanding Small Arts Organization and had the honor of singing at Carnegie Hall. The group gathered for a cocktail party at Carolyn French and Mike Huber's home in Fernewood to celebrate, before heading to the Big Apple. Patsy Bienvenue and several other vocalists gathered around the piano for a small preview of what was to come. Upon arriving in New York City, Chorale packed the concert hall, and the group received a standing ovation for its performance. Party Girl suggests another cocktail party to celebrate!