[Editor's Note: A planned Friday update to this story explaining how the project will help ease congestion at the intersection of Ambassador Caffery Parkway and Kaliste Saloom Road will be filed at a later date. Stirling Properties' Townsend Underhill tells ABiz the developers will share plans for infrastructure improvements, including new roads at the site, before the local Industrial Development Board public hearing, which has not been set.]

Covington-based Stirling Properties, in a joint venture with Acadiana Mall owner CBL & Associates Properties, plans to buy 58 acres from the Boustany family at the corner of Kaliste Saloom Road and Ambassador Caffery Parkway to construct an upscale shopping center anchored by Costco Wholesale. (Can you hear The IND office cheering?)

Called Ambassador Town Center, the project is estimated to cost $90 million to $100 million. 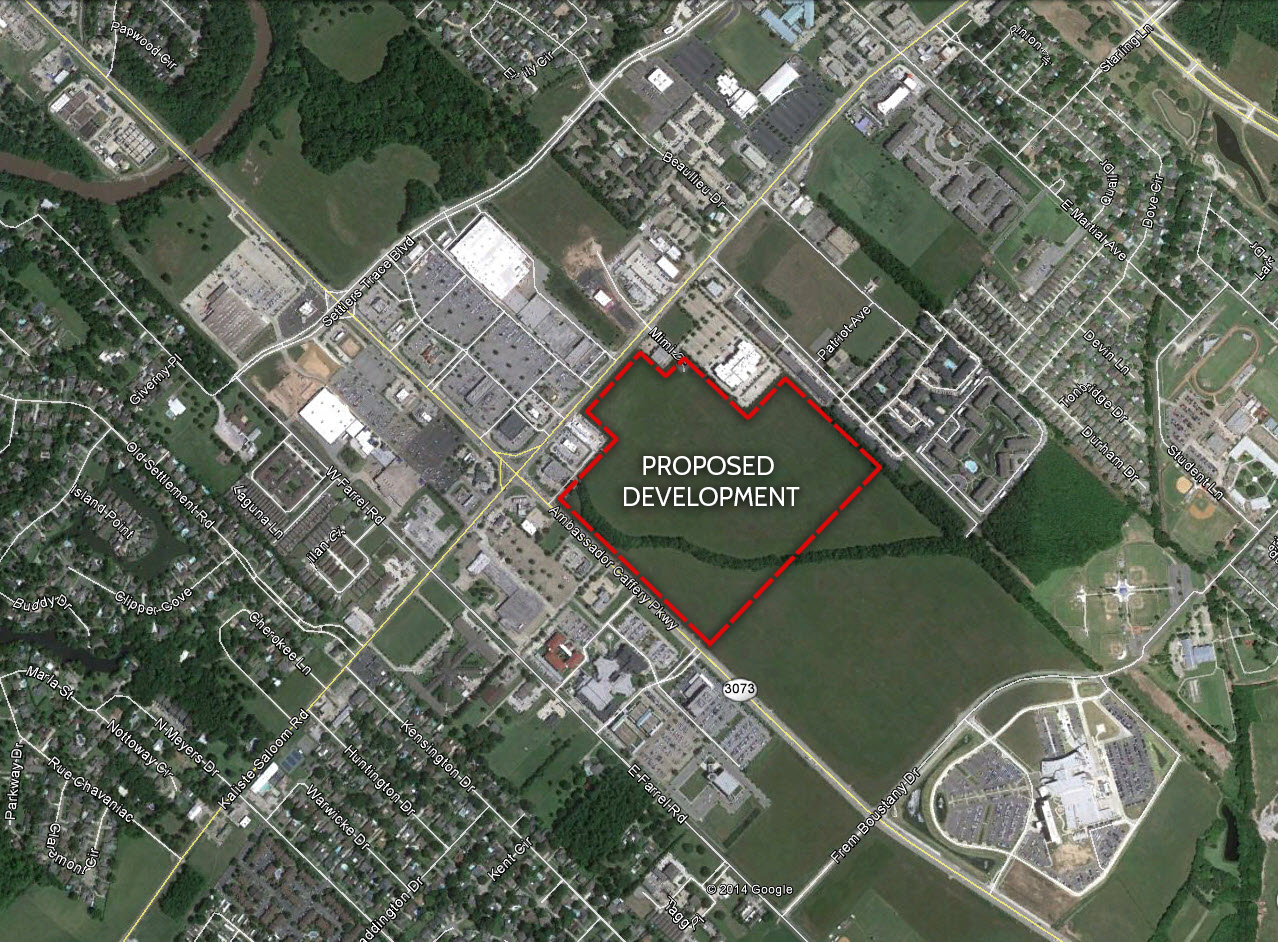 Townsend Underhill, the Stirling partner who is heading up the development, would only confirm to ABiz that Costco is anchoring the development, consuming 140,000 square feet of the 450,000-square-foot center. Underhill says the Stirling joint venture group hopes to start construction in the fourth quarter and open in October 2015. The transaction on the property would likely close the day before construction begins, he tells ABiz.

Readers of this publication might recall that in 2008 another local group proposed purchasing 125 acres of Boustany family property at the same site in hopes of creating an ultra high-density traditional neighborhood development. The recession that took hold a year later put the kibosh on those plans.

And while the property has sat undeveloped in the years since - no doubt enjoying to the fullest its agricultural classification that has it paying a fraction of the property taxes developed land would yield - the real estate community has been buzzing for more than year about the potential development of the land. Speculation of a Costco anchoring the unenclosed shopping center (a "power center" in real estate lingo) has been rampant, especially in recent weeks, as has talk that negotiations are under way with Dick's Sporting Goods, Field & Stream, Panera Bread, Chuy's Mexican restaurant and an outlet store for a high-end department store.

Underhill, while he confirmed that a national sporting goods and outdoor retailer has committed, was tight-lipped about any discussions beyond Costco, declining to comment on any of those potential tenants (we'll keep working on him). "We have some other committed deals," he says, noting that the tenants are still requesting confidentiality.

Underhill did say that 15,000 square feet or more will house a number of junior anchors (stores like Nordstrom Rack or the Neiman Marcus Last Call Studio that just opened in New Orleans' Riverwalk outlet mall are known as junior anchors), primarily clothing stores, and that the center will have what he describes as "large-scale" home interior stores and specialty fashion retailers. "I will tell you that we expect to have a sizeable number of restaurant users, both full-service and fast-casual users, that are new to the market," he says.

Word has been leaking out for so long because the project has taken a while to pull together; Stirling reps have been working closely with city officials to address infrastructure issues and traffic problems at the congested intersection.

Stirling Properties hopes to put the Boustany family land on Ambassador Caffery (across from Women's & Children's hospital) into commerce next year, using the increased property taxes the new development will generate to fund public infrastructure at and around the site.

Stirling Properties broker Ryan Pécot, who heads the Lafayette office, has been navigating the company through most of those issues while working to secure leases with major retailers like Costco. "On this project Ryan has played a significantly expanded development role," Underhill says.

What both parties settled on to make the deal happen and ease the strain on current infrastructure is a plan to utilize a program called Payment In Lieu of Taxes, often called PILOT (or PILT), Underhill says. The developers, with the blessing of the City-Parish Council (approval is not needed), will ask the local Industrial Development Board to issue industrial revenue bonds to fund the public infrastructure. Those bonds will be repaid with the money the developers/owners would otherwise pay in property taxes, which will increase dramatically with the new property classification to (income-producing) commercial.

Gregg Gothreaux, the Lafayette economic development chief who is the volunteer executive director of the IDB, says he is familiar with the Stirling project but has not been presented with the proposal. "I haven't received anything offically," he says. He declined comment until that time, noting that public meetings on the matter will be held.

Stirling has been meeting with the entities that would be affected by the forgone property taxes, among which is the sheriff's department and the school system, but their approval is not required for the project to move forward either. Underhill says it's more of a courtesy to reach out to the affected groups, most of which will benefit immensely by the new sales taxes the development will generate.

The final decision rests with the IDB, a political subdivision of the parish whose primary responsibility is the issuance of industrial revenue bonds. LEDA, which was formed in the 1970s, took over much of IDB's work, but it still helps to fund projects from time to time, Gothreaux says. The last such project was the AT&T Call Center in LEDA's Northpark Industrial Park.

Using property taxes to fund infrastructure is a more precise approach than some other programs, like Economic Development Districts or Tax Increment Financing districts, which rely on sales tax to repay bonds.

"If we build it as it's proposed, we will reduce traffic at the intersection [of Ambassador Caffery Parkway and Kaliste Saloom Road] by 12 percent," Underhill says.