Louisiana's Ragin' Cajuns have more games to play, more opportunities to make history. It all starts Thursday at 6 p.m. 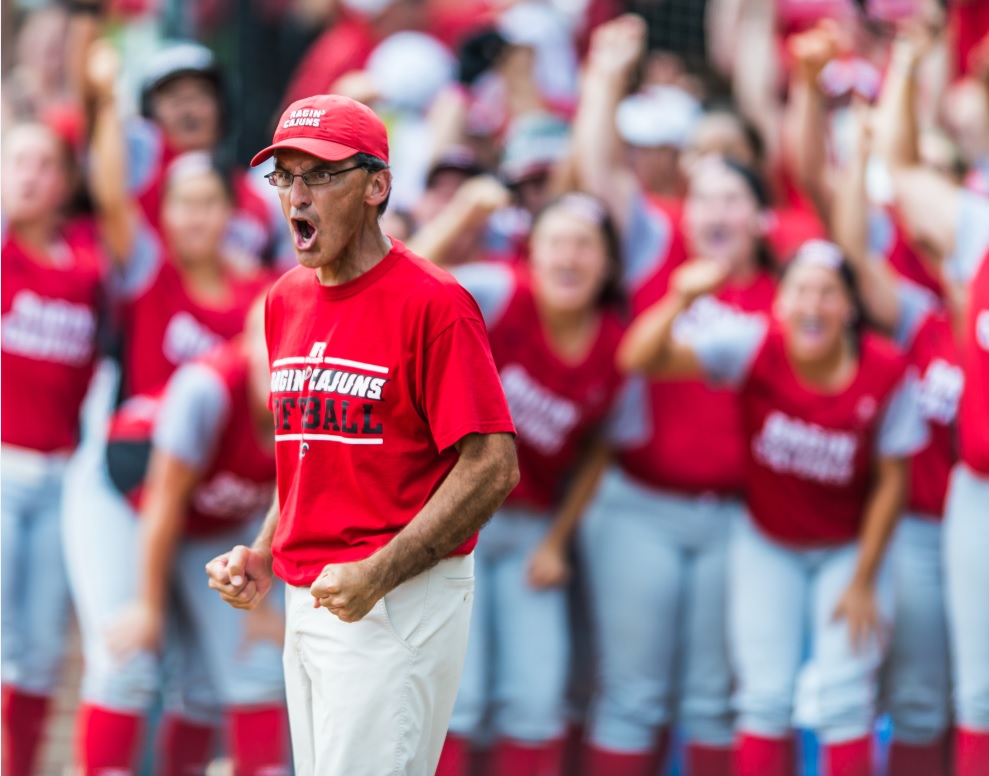 But first coach Michael Lotief wants to take time to reflect and enjoy what his team has accomplished. "You better savor this. What this team has done is phenomenal," he says. "They might not win another game this week. When you get to this point the margin of error is razor-thin. To do it on this stage against a worthy opponent is special."

The stage was set and the curtain barely up on a magnificent Friday evening when Arizona's Hallie Wilson opened the weekend drama with a leadoff home run. Another hit and a walk and the 2,691 in Lamson Park began to stir uneasily. Then Cajun pitcher Christina Hamilton struck out Chelsea Goodacre (22HR, 72 RBI), got Katiyana Mauga (19HR, 57 RBI) to fly out and followed with a fielder's choice to retire the Wildcats. The Cajuns answered with two runs in their half of the first and in the two games never trailed again. Over the weekend's 14 innings Hamilton and the Cajun defense held the nation's best-hitting club to four runs.

Arizona coach Mike Candrea described Hamilton as "a quality pitcher. She doesn't throw the same pitch in the same zone. She hits her spots." And later, with a touch of envy, "Hamilton showed a lot of grit." The Wildcats left runners on base in every inning of the first game and four innings of the second game, emblematic of what Lotief called "a mentally tough, gutsy performance." For her part Hamilton said she "trusted my coaches for the pitch calls and trusted my defense."

The Cajuns also outshined the high-powered Wildcats at the plate. Over their 13 at-bats the Cajuns collected 15 hits and 14 walks. Lotief was not surprised: "Our hitters do a good job of recognizing balls and strikes." Or as centerfielder Haley Hayden put it, "We took pitches we didn't want and swung at pitches we did want."

The Cajuns are off to Oklahoma City but the memories of the season and last weekend will last.

For catcher Lexie Elkins, who hit two home runs in the 7-1 second game win, "The game rewarded us. We knew we had the potential to do this."

For Shelbi Redfearn, who hit two homers herself over the weekend, "It was my turn to get out there and trust in the process. I wouldn't want to be here with anyone else."

For pitcher Christina Hamilton, "Our fans are literally like our family. We love them so much."

And, finally, for Lotief, "These kids have taken us on a fantastic ride. The game has rewarded them for being a sisterhood and loving each other."

The Cajuns open World Series play against Kentucky on Thursday at 6 p.m. The game will be on ESPN2.

The competition consists of two fourteam double elimination tournaments with the two winners meeting in a best two-out-of-three series to determine the national champion. Alabama and defending champion Oklahoma join UL and Kentucky in their bracket.

Arizona's Candrea - the one whose hands are weighed down with eight WCWS rings - likes the Cajuns' chances. "When you play in front of [the Lamson Park] crowd all the time," he says, "the World Series will seem like a piece of cake."