The IND's Nick Pittman weighs in on new records from Bonsoir Catin, The Revelers, Dire Wood and Rebirth Brass Band. 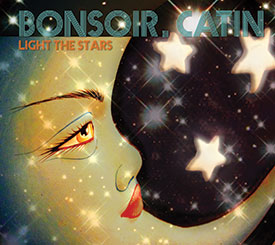 The cover of Bonsoir, Catin's first record, Blues à Catin, featured the almost all-female super group standing in a chicken yard. Its third, Light the Stars, features a starry sky and a dreamy-eyed moon. Has the music contained inside changed as well?

While Blues à Catin wasn't rough hewn, it showed grit. Light the Stars features a polished prettiness. Yes, there are plenty of sad songs, but it's a vibrant, lively record that glistens with lots of feel good melodies even if pinned to lyrics like "There are a million tears in my eyes when I cry." You could say it has a woman's touch.

Yet, the Catins are as adept as any man at writing the future of Cajun music. Here, two traditionals, "Moi l'aime une Petite Fille" and "Hackberry Two-Step," are resurrected with a fine touch. The Catins add eight songs to the genre, Kristi Guillory and Christine Balfa writing their own in a traditional-based style ("Marais Bouleur," "C'est pas eux-autres à Dire"). On others, the band shows they don't follow the rules of either gender in music or traditional restrictions: "Faut tu Voir" could easily be mistaken for a Rosie Ledet track. On certain tracks, strain and you will almost hear rock-n-roll. For example, in "Je vais Jamais Faire ça" Anya Burgess' fiddle takes a back seat to guitar solos. The closing track breaks into a full-blown Cajun blues romp. On "Personne que Toi," the Catins convert Natalie Mae Palms' (a New Orleans songbird by way of Detroit) "No One But You" into a Cajun love-struck tune about an all powerful love who lights the stars. In easily the biggest rule bender, Cajun music gets politicized in "C'est pas eux-autres à dire," a song in favor of marriage equality.

If Blues à Catin was a Saturday night record, Light the Stars is a Sunday morning/ afternoon in the park. Pleasant, mellowed, but still not far removed from last night's good times and this morning's regrets.

The Revelers
Play the Swamp Pop Classics: Volume I

The Revelers certainly live up to their name. The band is not trying to be cultural preservationists or anything of the sort, they are just having a good time. This four-song EP is a fun record, covering these four tunes: "Let the Good Times Roll," "Before I Grow Too Old," "The Lonely Room," and "Who's Afraid of Virginia Woolf?"

The Revelers make it seem easy. Of course, it doesn't hurt to have original members of The Red Stick Ramblers and The Pine Leaf Boys forming the core of the band. Former Rambler Glenn Fields discovers his voice on "The Lonely Room" and "Before I Grow Too Old." Though not a typical swamp pop crooner, it works quite well. Chas Justus (former guitarist for the Ramblers) spotlights his lesser-known talent as he sings a fittingly rollicking "Let the Good Times Roll." The EP ends with a spirited near-jam version of "Who's Afraid of Virginia Woolf?," adapting the movie soundtrack song from a live version by The Boogie Kings.

Though they will not replace the original versions, the band provides interesting takes on the material, making them their own. Blake Miller (Pine Leaf Boys) adds accordion to the tracks, a just-right touch that adds to what other versions of these classics was missing. Miller doubles up and shares fiddle duty with Daniel Coolik, also a nice addition to these classics.

The only downside is it doesn't contain a slice or two of the Cajun material in their repertoire, which are some of their best numbers. Still, it's a breezy record that may not turn these classics on their head but definitely deserves turning up. 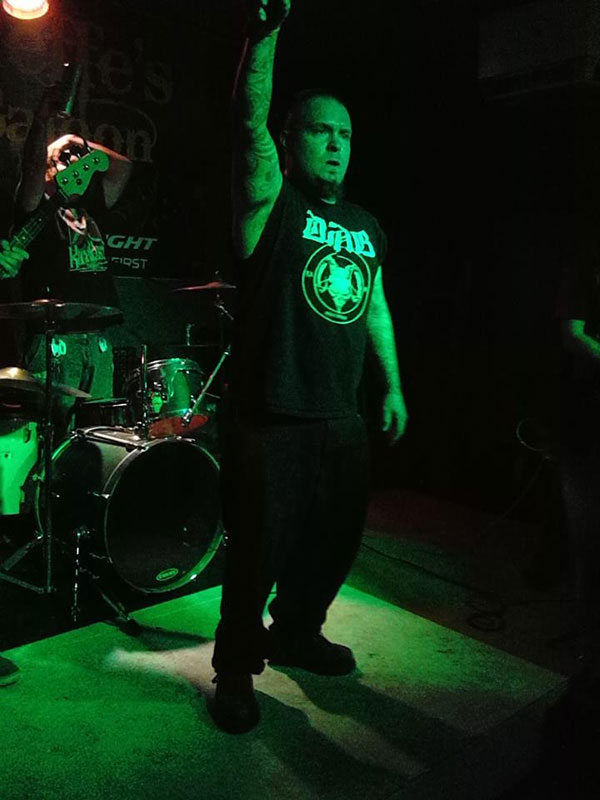 EVIL IS THE NEW GOOD

If you don't like the weather, wait 15 minutes. If you want to see members of a Lafayette rock band split, reconfigure or migrate to another outfit, the clouds won't have time to roll before your wish is granted. That impatient, always reforming and reorganizing weather-like pattern helped created Black Ferratu.

Drummer Mac Black calls their sound metal, " that goes from punk to sludge and doom," but Black Ferratu's Evil is the New Good is best described as rock from the worst side of the tracks. From the opening cut, there are tales of repercussions, ruthless bravado, terrible vices and comprising addictions.

Moody at times - with timing changes a plenty - it has a sludgy, slower moving quality, a la Crowbar or Down. A far throw from his days in Bimora, the frontman abandoned the funky rap street preacher delivery and political/anti capitalist themes he once explored, instead opting for brass knuckles and baseball bats.  Ferratu shows Pantera influences in their bravado and fight-the-world outlook (songs like "Regret" are reminiscent of "Walk").

On the record, Black Ferratu shows a softer side - not in content - by covering songs penned by Chris Bennet (Criss Drunk), the late front man for Mysitic Fix, a Lafayette '90s punk staple. The two tracks - "Vampire" and "Fish on a Hook" - are a nice change of pace that show the dark, Southern rock sound of his later band The LA Phantoms. "Fish on a Hook" is especially poignant after Drunk's death: living at full speed, working hard and always caught up in something.

Whether covering Drunk or singing about their own vices, Black Ferratu's style shifts sporadically. They almost can't make up their mind but it's not a bad thing. Their clouds darken and part at times, but Evil is the New Good is always a degree or two away from a blistering storm.

One of the best records to come out of Acadiana this year is actually from 2009. Dire Wood's Little Band in a Big House is a stellar record that shouldn't have gone unheard for five years.

Recorded just before Dire Wood disbanded - after all it was a Lafayette rock band - it presents a more tangible, less dreamy and vague band than their previous releases. Perfectly merging alt country and indie rock's left-of-center narratives and emphasis on catchy, Little Band is not twangy or kitschy. It's not an odd fusion of these styles, just a passing mingle that works very well.  This grounding of indie rock with alt country textures creates interesting pairings such as "Cool Kids," a song about partying carrying a lonesome sound. The dreamy "Due West" is full of melancholy, yet optimistic.

As the layers of strings are added, these tangible sounds are complemented by the occasional breathy puff of Tiffany Lamson's (of GIVERS) vocals drifting about and Jay Burton's superb songwriting and crafting skills.

"You People" is an incredible coming-of-age song dealing with an often overlooked drawback of adulthood: growing up means growing apart. On top of the perfect blend of sound, Burton reasons "I won't hear you, cause I don't even know you people anymore." Conversely, "New Mexico" is a playful song with hooks that get stuck in your head and won't budge.  Overall, "Little Band " is mellow, yet packs a nice little hop - train-like rhythms on "Cool Kids" and "Everywhere I Go" keep an upbeat pace.

The last two songs slide into an ethereal mood. The downright haunting "Working the Land" feels like a 4 a.m. workday. With a bit of mountain banjo sounds thrown in, followed by ghostly melodies and high prose, it is an interesting spin that shows country music isn't the only avenue for blue collar anthems. "Skipping Church" ends the record, the ache conveyed almost too great for another track.

With its release, Dire Wood booked a return gig. If they stay and create more quality albums like Little Band , the five-year wait will be worth it. 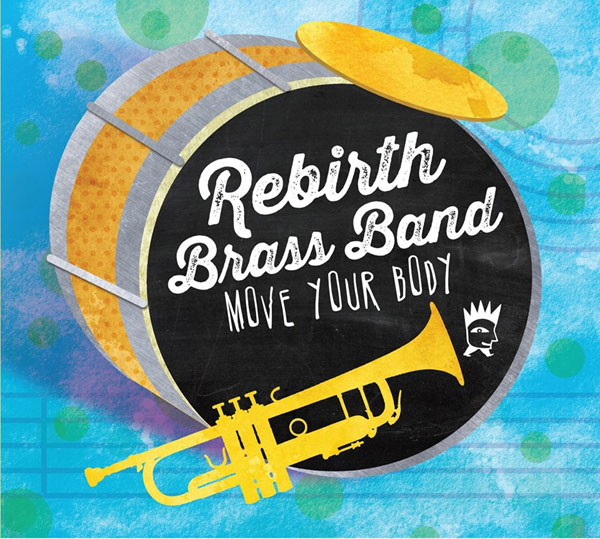 Forget Crossfit: If you want a workout, pop in Rebirth Jazz Band's Move Your Body.

It's definitely a record that delivers what it promises. Listen to it and you will move. There are no first gear songs, everything here is shifted into overdrive. From the opening track to the end, Rebirth looks to throw down. Though a party, it's not out-of-control shenanigans. Rebirth is dead-on and tight like the Southern University marching band in a streamlined form. Since its inception, Rebirth has been known for an uncanny ability to play the standards - "Lord, Lord, Lord, You've Sure Been Good To Me" - and the music pouring out of Uptown car windows. They mix it up and bring in songs nowhere near what used to be considered acceptable for brass bands: Kenny Loggins' "Your Mama Don't Dance" is so worked over that it is unrecognizable. Yet, it works.

Rebirth delivers: gut-rattling drums and tuba; dizzying trumpets and saxophone; brass by the ton; rhythms and beats that will make your granny clap. Though tame compared to past collaborations with rappers, there is some crowd pumping call-and- response and a bit of hip-hop lyrics.

In other words, it's a Rebirth record.