The Mississippi State Bulldogs got thumped out of the post season by UL's Ragin' Cajuns and someone ain't happy about it. 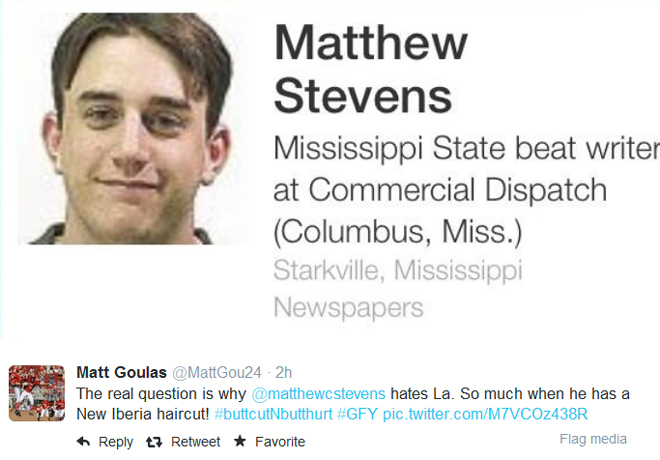 Stevens is getting "the business" from Cajuns fans on Twitter.

There's also little question that at least one Mississippi State fan - based on a rant during a radio broadcast - is a sore loser. That fan is Matthew Stevens, a Bulldog sports beat writer for the nearby Columbus Commercial Dispatch newspaper. Over the course of about six minutes, Stevens and a co-host - but mostly Stevens - questioned whether Cajuns are a missing evolutionary link between apes and humans, characterized Lafayette as "the worst place in America" where he couldn't find a suitable neighborhood in which to raise kids and even made fun of the way we talk. Mais, dat's not cool, cher!

You can listen to the "conversation" in the YouTube video below. Enter at your own risk.

This little nugget came to our attention via Facebook, where some locals became aware of Uneven Stevens' disparaging remarks. At least one Cajun fan contacted Stevens' employer to lodge a complaint. Hopefully he won't get fired, as some on Facebook are demanding, for being a sore loser and a jerk. Stevens was no doubt shocked to learn that we have Internet in Lafayette; he's been getting the business from Cajun fans and offended Lafayette residents on Twitter all day. And in fairness, Stevens has apologized profusely for his offensive remarks.

Just for a quick comparison: Starkville, where MSU is located, has a population of roughly 25,000 in a county of about double that. Lafayette's population is north of 121,000 in a parish of about 222,000. Median family income in Starkville - $39,000; Lafayette - $48,000. Thirty-one percent of Starkville's residents live below the federal poverty line compared to 16 percent of Lafayette's. So, basically, the differences are stark. There is no comparison.

OK, get back to what you were doing.