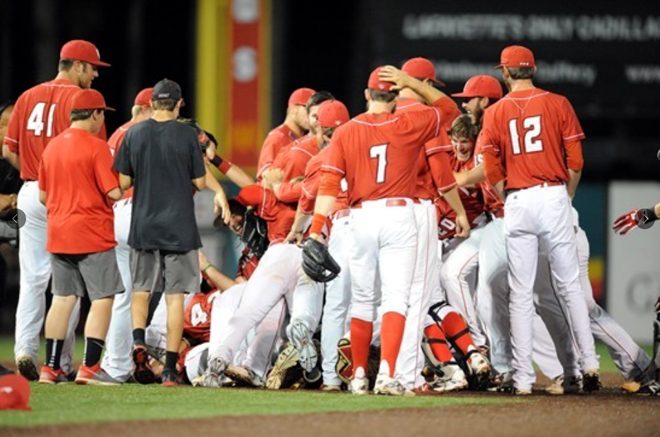 The team celebrates after dispatching Mississippi State Monday in the regional tournament.

There's a big banner in UL Lafayette's locker room that celebrates the program's only trip to the College World Series in 2000.

Ragin' Cajuns catcher Michael Strentz hopes the school has to do a little remodeling in the offseason.

"We look at it every day, but it was 14 years ago," Strentz said. "We want to change that and put our picture up there."

UL (57-8) is two wins away from making it happen. The Ragin' Cajuns will host Mississippi (44-18) on Saturday in the first game of a best-of-three Super Regional series in the NCAA Tournament.

The Rebels are trying to advance to the College World Series for the first time since 1972. They've been agonizingly close several times over the past decade, but lost four times in Super Regional play, including to Texas in 2005, Miami in 2006, Arizona State in 2007 and Virginia in 2009.

The series will feature two of college baseball's best offenses.

Ole Miss has a .304 team batting average despite playing in the pitching-dominant Southeastern Conference. UL has hit 66 homers in 65 games and has seven regulars hitting above .300.

The Ragin' Cajuns have already shown their resiliency in the postseason. They lost their NCAA tournament opener to Jackson State before reeling off four straight wins to capture the Lafayette Regional.

"They obviously have a really good offense. I've heard all year about how good they are," Ole Miss pitcher Chris Ellis said. "But we've just got to go out there and do what we've done - throw strikes and hit our spots."

Here are five things to watch at the Lafayette Super Regional this weekend:

SOMEONE WILL BREAK THE DROUGHT: Ole Miss has had consistent success during coach Mike Bianco's 14 seasons, but has never made the College World Series. The Rebels have been close many times - losing in the Super Regionals in 2005, '06, '07 and '09 - but haven't been able to find their way to Omaha since 1972. The Ragin' Cajuns made it to the CWS in 2000, but hasn't been back since.

BIG-TIME BULLPEN: Ole Miss has had good starting pitching and a productive lineup throughout the season, but it's the bullpen that has the Rebels two wins from the College World Series. Aaron Greenwood and Scott Weathersby both had lengthy, shutdown performances during the Oxford Regional and join usual closer Josh Laxer to give Bianco plenty of choices out of the pen.

BREAK OUT THE BATS: Ole Miss and UL should put on an offensive show this weekend. The Rebels were one of the best hitting teams in the Southeastern Conference this season, with a .304 team batting average. The Ragin' Cajuns have hit 66 home runs in 65 games and seven regulars are hitting at least .300.

TAME THE TURF: UL will have more than just the home crowd on its side. The Ragin' Cajuns play on artificial field turf, which Ole Miss hasn't seen much of this season. The entire field is turf except the pitcher's mound, and Bianco said the team will spend much of its pre-regional practice time taking infield to get used to the surface.

PROVING THEIR WORTH: UL may play in the unheralded Sun Belt Conference, but the team earned plenty of respect during the regular season by piling up more than 50 wins. The Ragin' Cajuns earned the No. 6 overall seed in the NCAA tournament, and after a brief hiccup in a stunning loss to Jackson State in their NCAA opener, ripped off four straight wins to advance to the Super Regionals