According to court documents, the main reason for Wednesday's hearing before U.S. District Judge Elizabeth Foote centers on Goode's comments to the media during the course of the federal investigation, and in particular for statements made immediately after the suicide of defendant Barry Domingue. The judge also is questioning whether Goode has a conflict of interest for having represented a defendant who pleaded guilty all the while assisting one who maintains his innocence. 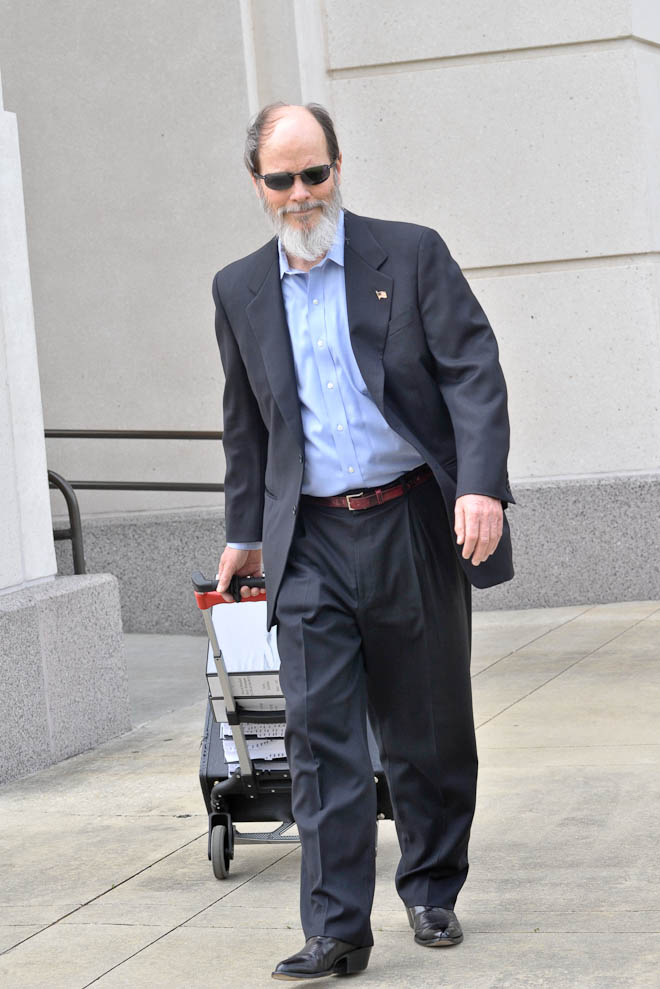 After making comments to the local media about the suicide of defendant Barry Domingue, comments a federal judge says violate local rules and Louisiana's Rules of Professional Conduct, attorney Bill Goode exited the courthouse following a mistrial hearing on April 2.

Domingue's suicide resulted in a mistrial for the final defendant in the case, Daniel Stanford, who's also a criminal defense attorney and shares an office with Goode. Like Domingue, Stanford faces a federal conspiracy charge for his role in the marketing and sale of synthetic marijuana.

In The IND's numerous previous interviews with Goode, no mention was ever made about his role as legal counsel for any of the defendants who eventually pleaded guilty in the federal case (although he did confirm on the day of Domingue's death that he had been assisting Stanford and Domingue. All along Stanford and Domingue maintained their innocence).

Yet, according to newly released court documents, Goode was retained as counsel in 2012 following a federal grand jury's indictment of the first three defendants in the case: Boyd Anthony Barrow, Joshua Espinoza and Richard Buswell.

Goode was hired by Espinoza and appeared as his legal counsel for an arraignment hearing on June 11, 2012.

On Sept. 4, 2012, seven additional defendants were indicted by the federal grand jury, including Daniel Stanford and Barry Domingue.

Shortly after, on Sept. 21, 2012, Goode, for unknown reasons, filed a sealed motion to withdraw as legal counsel for Espinoza. Two months later, after retaining new counsel, Espinoza entered a plea deal and began cooperating with the federal investigation.

Goode, according to the record, then got involved with Stanford. As part of our coverage of the Curious Goods case, we interviewed Goode in November 2012 for a story about Stanford's role in the alleged conspiracy. At that time, Goode made no mention of his involvement as Stanford's unofficial legal adviser.

Yet Goode appeared alongside Stanford at a hearing on April 16, 2013, prompting the court to question his role in the case: "Stanford and Goode represented to the Court that Defendant Stanford would be representing himself pro se in this matter but that Goode would be assisting' Stanford."

The U.S. Attorney's Office followed up by filing a motion for what's called a Garcia Hearing to determine whether Goode's prior involvement as Espinoza's attorney represented a conflict of interest in assisting Stanford. Goode argued that he had no intention of representing Stanford, and the motion was withdrawn.

When the trial against Stanford and Domingue finally came around on March 31, 2014, Goode was in court and appeared to have expanded his unofficial representation to include both defendants.

"Goode was present for all court proceedings, assisting both defendants, who were then proceeding under an informal defense agreement and both representing themselves pro se," court documents read. "In open court, Goode sat in front of the bar and conferred with, and passed notes to, both defendants."

Despite claiming an unofficial role, Goode's behind-the-scenes involvement in the case - namely that he represented one defendant who eventually pleaded guilty and another who maintains his innocence - is unsettling, but it appears the main reason for Wednesday's sanctions hearing centers on comments he made to the press immediately following the death of defendant Domingue, a personal injury attorney out of Carencro who committed suicide April 2, the second day of the trial.

"The behavior in which Goode engaged that day, just outside of the presence of this Court, was explicitly found to have been violative of both the Local Rules, as well as Louisiana's Rules of Professional Conduct, regarding extrajudicial commentary related to this criminal proceeding," the court record states. "This show cause hearing will address not only Goode's behavior on April 2, 2014, but also any other alleged misbehavior of this nature, on the part of Goode and related to his involvement in this case."

The court documents include nine articles with statements from Goode, including a number of stories published by The IND over the course of our coverage of the Curious Goods case. The majority of Goode's comments included in the nine reports centered on Domingue's suicide, and that both Stanford and Domingue were innocent of the federal conspiracy charges.

We reached out to Goode, but he says he's unable to comment at this time.

No decision has been made by Foote.

According to Ciolino, Goode could either be held in contempt or face sanctions, but he won't disbarred as a result of the hearing.