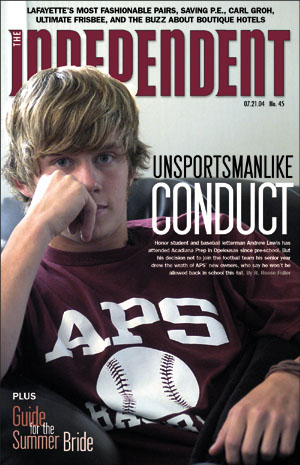 The Louisiana Press Association announced the results of its annual competition on Saturday, April 16, and for the second year in a row, The Independent Weekly took home a truckload of awards.

The paper earned a total of 26 awards, more than any other newspaper in our division. (Our competitors include New Orleans' Gambit Weekly and City Business, Baton Rouge Business Report and The Times of Acadiana.)

The awards are judged annually by press clubs outside of Louisiana, ensuring that nepotism isn't a factor in the judging. And the results this year are particularly gratifying for us, as the judges recognized The Independent Weekly for a wide scope of excellence in every facet of publishing.

Culture and arts and entertainment coverage is as important to The Independent Weekly as our news coverage. Staff writer Erin Zaunbrecher's food writing was a major factor in our first place award for Best Lifestyle Coverage.

Our advertising and promotion department has multiple reasons to be proud, too: it was cited for first place awards in the advertising categories of Multiple Advertiser Page, staff generated black and white ad and Advertising Idea or Promotion for the paper's "Taking Care of Business," a special advertising supplement. Designer Richard Hoffkins' advertising design took home a number of trophies.

It's a tenet of the newspaper business that you're only as good as your last issue, so rest assured that we aren't resting on our laurels. It's been less than two years since we published our debut issue in August 2003, and in some ways, we feel like we're just getting revved up. It's heartening to see our work honored by the LPA, but the whole Independent Weekly staff knows that our readers are the ones who ultimately judge us ' every week. We thank you for your continued readership and support, and welcome your continued feedback, comments and story ideas at [email protected].