Supporters of a financing plan to secure a Costco-anchored development argue it's an economic tool our community must use to be competitive; opponents cry cronyism. 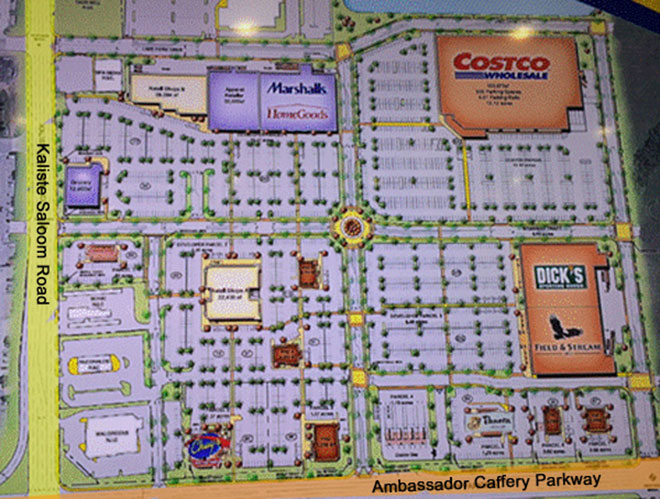 An Ambassador Town Center plan being circulated by opponents of the PILOT financing plan shows the layout of the big box retailers within the development. However, Stirling Porperties' Townsend Underhill, asked to confirm the accuracy of the plan, would only say via email, "This is not the proposed public infrastructure plan that will be presented to the IDB for consideration. The full plan is being fine-tuned based on some recent feedback in advance of the IDB hearing."

The next meeting of the Industrial Development Board for Lafayette Parish promises to be a doozy. Virtually unheard-of before a May 27 meeting of the Lafayette City-Parish Council when the seven-member, volunteer IDB - the board is appointed by the council and members serve six-year terms with a two-term limit but only meets as-needed - was identified as the commission tasked with pulling off a complex financing deal to secure that $95 million, 58-acre Ambassador Town Center development anchored by Costco Wholesale and Dick's Sporting Goods near the Ambassador Caffery-Kaliste Saloom Road intersection

The development, a joint venture between Covington-based Stirling Properties and Acadiana Mall owner CBL & Associates Properties of Chattanooga, Tenn., itself isn't controversial. Who, after all, doesn't want a Costco, not to mention the dozens of restaurants, boutiques and smaller shops that will scurry into the safe shadows of the big box stores? What will pack the opposition into that next IDB meeting, which as of this writing hasn't been scheduled, is the financing: The IDB is expected to engineer the deal through a payment in lieu of taxes plan, often referred to by its acronym, PILOT, and that means siphoning some $8.5 million in property taxes away from the sheriff's office, the jail and parish courthouse, mosquito abatement and a host of other entities financed solely through millages.

As the project appears now - Stirling has yet to publicly release the plan - the IDB would take title to the property (currently owned by the Boustany family) and issue a debt facility (such as bonds) to cover construction of surrounding infrastructure, notably a new road running parallel with Ambassador between Kaliste Saloom and Frem Boustany Drive with a goal of eventually connecting to Verot School Road, but also connector roads within the development. Property owners in Ambassador Town Center would still pay property taxes, but that money would be diverted away from the usual beneficiaries (sheriff, courthouse, etc.) to pay off the infrastructure debt. When the debt is paid off, the title would be transferred to the developers and any of the major tenants that own their sites. Preliminary indications are that the PILOT will be in place for a decade before title transfer. After that, the development will generate property taxes for its intended sources. And as soon as the 450,000-square-foot development is completed sometime in 2015, it will begin generating millions of dollars annually in sales taxes.

Stirling says the project should create 2,500 construction jobs and 1,100 permanent jobs and generate $250 million in annual sales, which includes almost $9 million in new sales taxes the first year of operation.

Supporters of the plan, and there are many and they are influential, point out that the land is currently assessed at an agricultural rate and generates little in property tax and nothing in sales taxes. Assessor Conrad Comeaux confirms the property is generating less than $350 annually in property tax and estimates it will generate upwards of $1 million-plus annually - $600,000-$700,000 in property taxes for land and fixed buildings and $300,000-$325,000 in inventory taxes for fixtures, furnishings and other "movable" property "depending on what goes in there." That inventory tax is not part of the PILOT and will flow into public coffers.

Supporters also note that the city will get a new road, and according to Stirling's Ryan Pécot at the May 27 council meeting, a traffic-impact analysis suggests the new road will help alleviate traffic congestion on Kaliste Saloom and Ambassador - even accounting for the influx of new shoppers at the development - by up to 11 percent.

PILOTs, like tax increment financing districts (TIFs), are allowed by state law, which also countenances industrial development boards collecting taxes to cover infrastructure upgrades. It's spelled out in the state law that created parish IDBs decades ago. Infrastructure for the successful Stirling Lafayette Shopping Center at I-10 anchored by Target and JCPenney was built through a TIF engineered by Lafayette's IDB.

The council spent nearly an hour and a half discussing the plan ahead of a vote on a resolution endorsing the Costco PILOT. The council has no power to stop the plan - a point of contention for opponents. It was merely asked to give its blessing, which it did in a 6-3 vote. 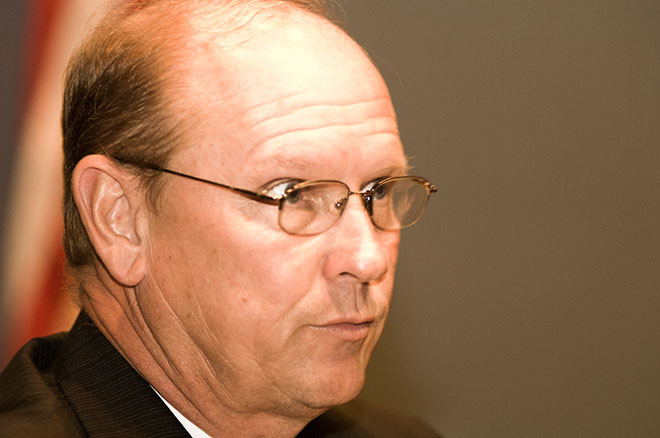 City-Parish President Joey Durel said while he's not entirely comfortable with the funding tool, Lafayette must use PILOTs and TIFs if it wants to remain regionally competitive. "Whatever our philosophical issues are with some of this - it's not a moral issue; it's a technical issue - our competition might not have those same philosophical issues. So we have to decide, do we want to compete or do we want to just lay down?" he said. "And I believe if this community is going to progress, we can't ignore these tools - again, as I said, our competition doesn't ignore these tools. This is an opportunity for us to bring in a great shopping center."

Worth noting: Baton Rouge created a taxing district last year to direct about $7 million in sales taxes toward infrastructure for a Costco-anchored development that opened this past May, buttressing Durel's argument that communities are indeed using such financing deals to lure in major retailers. (Costco is the nation's second-largest retailer behind Walmart.)

But opponents, namely conservative business people in south Lafayette who are sympathetic to or have affiliation with the Tea Party, are not impressed.

Her husband, newspaper publisher and former state lawmaker Ron Gomez, raised it a notch: "This will be challenged in court - if by no one else, by me," he vowed.

Several other opponents of the plan also addressed the council, along with a few supporters. The crux of the opposition's argument is four-layered: the land is prime commercial real estate and would be developed without the PILOT; TIFs and PILOTs were intended to aid under-served or blighted areas, which Ambassador-Kaliste most certainly isn't; the plan rewards wealthy developers and corporations at the expense of other merchants who weren't granted such government largesse; and the IDB is an un-elected agency that isn't accountable to the public and therefore should keep its hands out of the public's cookie jar. 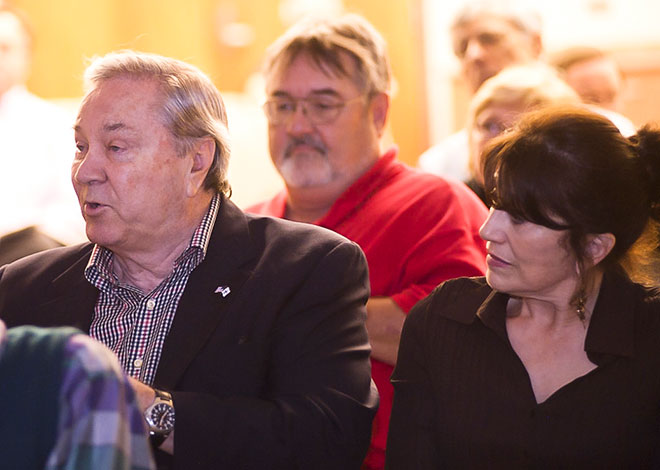 Former state lawmaker Ron Gomez (left), now a newspaper publisher, has vowed to fight the plan to use future property taxes to fund infrastructure around the proposed Costco center even if he has to file a lawsuit himself. At right is Gomez's wife, Carol Ross, who also opposes the plan.

A former Lafayette elected official who asked not to be identified for this story tells ABiz that while he is generally supportive of the plan he does worry that diverting $8.5 million in property taxes over 10 years could have an adverse impact on some governmental functions that are funded solely by millages. However, another insider with knowledge of the proposed plan points out that the property is currently generating virtually no property tax, and the tenants at Ambassador Town Center will still have to pay inventory taxes during the term of the PILOT, a portion of which will go to those agencies that rely on property taxes.

Ross and Gomez tell ABiz they are researching their options to prevent the IDB from doing the financing through a PILOT, although Ross acknowledges that the ultimate recourse might be to get a local state lawmaker to file legislation in next year's session neutering IDBs' use of public dollars for private projects.

But Gomez isn't ready to call the Ambassador Town Center deal a fait accompli either. "I have received several calls offering assistance, financial and otherwise, should we need to go that route," he tells ABiz, noting that the offers include pro bono legal assistance.

Kevin Blanchard, Lafayette Consolidated Government's chief development officer from whose desk the IDB-PILOT council resolution originated, echoes one of Durel's arguments: Getting a public road out of the deal to alleviate congestion at one of Lafayette's busiest corridors makes the PILOT even more attractive.

"I think everybody should take a wait-and-see approach here," he says. "What the council did was to basically let the IDB know this is a worthy project and something that is worth the IDB's time to take up and work out the deal, but we still haven't worked out the deal and we still haven't gotten all the parameters together - all the numbers together, revenue projections together - and all those details that have to fit so that you can loan money.

"So, to some extent what we're really having at this point is just a philosophical discussion - about whether or not these types of programs should be used.

"It's our position that if these tools are out there and these are tools that other communities in our state are using - and that's the case; this is not that uncommon of a structure in other metropolitan areas - then we need to be utilizing that, because we have, as taxpayers, limited resources on how we fund our infrastructure needs. If this is a tool that provides a way for us to put in some needed infrastructure, then we need to pursue that. But in the end it all comes down to whether or not the numbers can work."