Before Swamp Pop was a soda, it was a T-shirt design, yet the artist behind the T-shirt has been mostly forgotten as the soft drink's popularity rises.

Using a double entendre for the music genre known as Swamp Pop - made popular in Acadiana back in the '60s, yet fairly obscure to the rest of the world - cousins John Peterson and Collin Cormier launched a soda company using the name in December 2012. 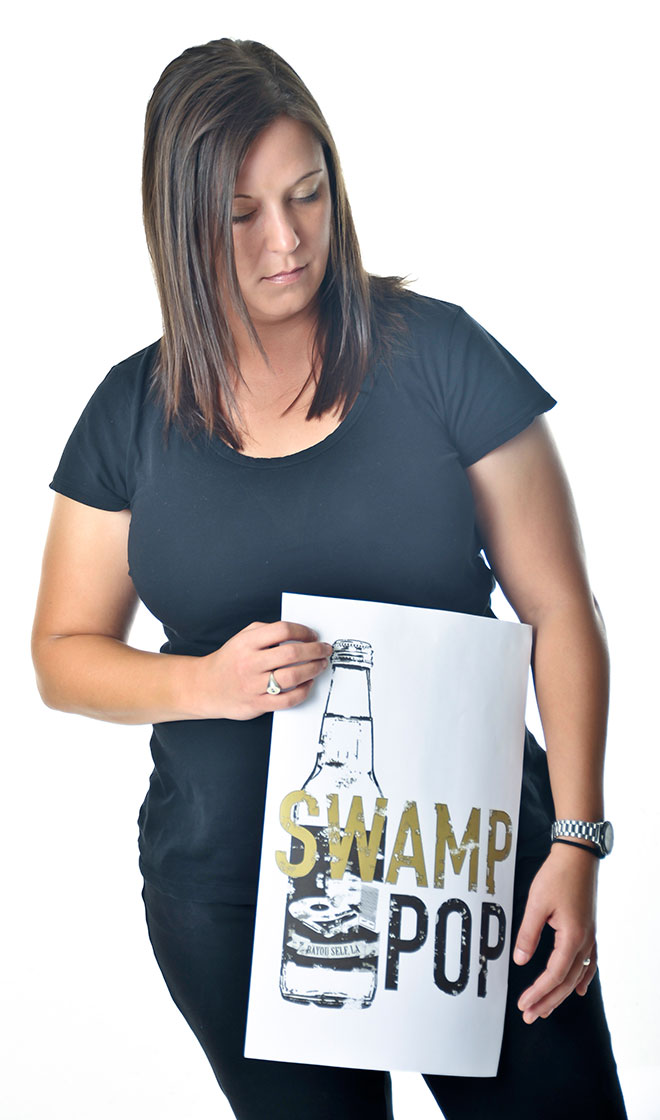 Brandy Cavitt with her design for a Swamp Pop T-shirt. Cavitt claims her design was the inspiration behind the Swamp Pop soda company, though its co-founders, John Peterson and Collin Cormier, have been inconsistent when telling the media about the origins of their company's name.

Within no time, the drink went from being offered locally to being stocked on shelves nationwide.

Since then, Peterson and Cormier have been featured in numerous articles, and in all their interviews, there's been one recurring question: Who came up with the name?

"The phrase is where it all started, and the fact no one had used Swamp Pop for the brand name of a soda before," Peterson told ABiz during a June 2013 interview, shortly before the soda's official release.

225 magazine posted a feature on the soda in January, writing, "Cousins John Peterson and Collin Cormier of Lafayette came up with the idea a few years ago to swap out the artificial sweeteners in soda pop for natural, Louisiana-grown sugar cane. Thus Swamp Pop was born. And we're still trying to figure out how no one had taken that name until now."

The cousins were featured again in the June issue of Acadiana Profile: "They can't remember exactly where they were or what they were doing when this light bulb illuminated, because they've been at each other's side from the time they learned to shove a straw through a juice box. And quite honestly, they aren't quite sure who said it, but someone used the term Swamp Pop as a double entendre."

A story published in the December 2013 issue of Country Road Magazine, however, reveals a different origin behind the company's name: "One day while surfing Facebook, a piece of digital art caught Cormier's eye. A drawing of a glass bottle with the caption Drink Swamp Pop' made him laugh. He liked the double entendre. He called Peterson and asked if anyone was making soda with the name Swamp Pop. No one was."

Enter Brandy Cavitt: The creator of the digital art that "caught Cormier's eye."

Using the same double entendre, Cavitt, in November 2012 entered a T-shirt design contest held by the Storyville T-shirt company out of New Orleans. To drum up votes for her design, Cavitt launched a social media campaign, and was featured in a story posted in December 2012 on 99.9 KTDY's website - right before Cormier and Peterson came up with the idea for the name of their soda.

Despite receiving the most votes, Cavitt didn't win the T-shirt contest (her design, according to Storyville, wasn't familiar enough of a concept for the New Orleans market). Knowing she had a solid idea, however, Cavitt decided to take the design - along with several other Cajun-themed T-shirts - to Red Arrow Workshop.

"I went to Red Arrow, showed the guy all my T-shirt designs and he pointed to one he was interested in," Cavitt tells ABiz. "He said since they had just opened their doors, they weren't in a position to buy a shirt at the time, but said they would follow up when they were ready."

That shirt, says Cavitt, was the Swamp Pop soda shirt.

"My friend says he saw a Swamp Pop shirt at Red Arrow, so I went over there and I see the shirt," recalls Cavitt. "I had no grounds to prove they stole the idea, but I had come up with a brand and was actively marketing to get this T-shirt off the ground. Then they went ahead and made a T-shirt for the Swamp Pop soda guys." 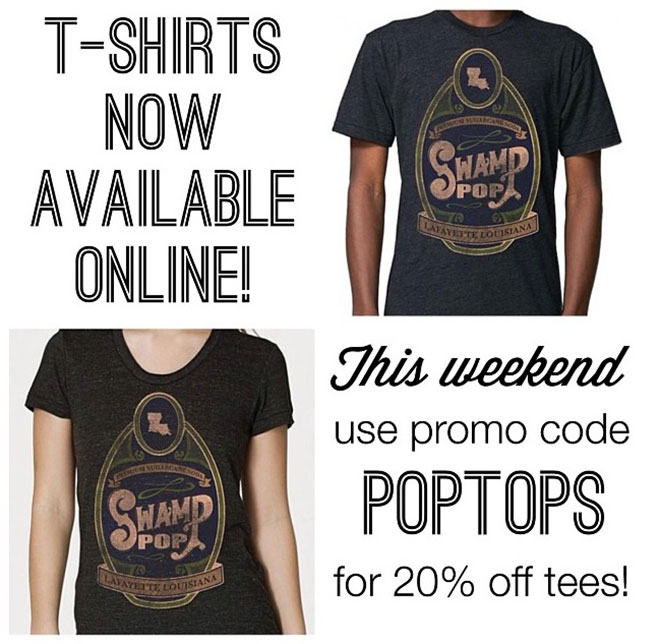 The T-shirt was actually designed by Parish Ink; one of its owners also owns Red Arrow Workshop.

"It is not the policy of either Red Arrow Workshop or Parish Ink to purchase T-shirt designs or products from solicitors," says Jason Brown of Red Arrow. "I would also like to clarify that Red Arrow was not commissioned to design anything for Swamp Pop. Bram Johnson, an owner of Parish Ink, was independently contracted to do that design work, and Parish Ink ended up printing the shirts and selling them as part of a co-branded effort between Swamp Pop and Parish Ink. Red Arrow Workshop did not begin purchasing its own T-shirts until last fall."

About a month ago, Cavitt says she encountered Cormier - who also owns Viva La Waffle - when he parked his food truck near her office.

"He came by the office with his food truck and said, You know where we got that idea, we saw you were in that contest on Facebook, that's where we got the idea for the whole thing,'" recalls Cavitt.

Though frustrated, Cavitt says she's not looking for a payout from Cormier and Peterson; she just wants official recognition as the artist who inspired the idea for their company.

"I don't want money from them," says Cavitt. "If they tell me they came up with the idea from my design, then I wish that's what they would tell the media."

Following the release of the June article by Acadiana Profile, which claimed Cormier and Peterson couldn't recall the origin of their company's name, Cavitt texted Cormier asking for an explanation. In a response message, Cormier writes: "Truth is we were going to be called parish pop for months after all of that but because of the tie in with our great grandfather Papop' we changed out [sic] mind right before production... I told you that because I thought Storyville screwed you over and I really did see that and it triggered something. But to insinuate that we are purposely hiding that somehow is a low blow. Bottom line, John [Peterson] did the interview, he's done most of them since I am always on the truck and he really didn't remember."

ABiz reached out to Peterson, who says he and Cormier have never intentionally been secretive on the origins of the company's name. He also admits to seeing Cavitt's T-shirt design on Facebook, but adds he's never met the artist and didn't know her name.

"We pretty regularly say this in interviews that we had seen the double entendre of the music genre with the bottles, and yes, I had seen it a few times before," says Peterson. "We don't always say it, but we're not secretive about it. The idea of using those two words together is not something we would ever claim to be the first to do. We just asked had anybody ever tried to make a soda using those two words and then we did, but we don't ever claim to be the first to use that idea."

According to local attorney Bill Stagg, who specializes in intellectual property law, if an artist creates a painting or a photograph, a copyright attaches immediately.

Yet Stagg says a copyright only protects the expression of an idea, not the idea itself.

A trademark, on the other hand, entails a completely different set of rules, says Stagg, and since Cormier and Peterson have advertised, marketed and developed a certain level of public recognition for the brand of their soda, their product, and their right to the name, would be protected under the U.S. Trademark Law.

"Since their soda has become locally famous, or at least has some notoriety where the public understands what that is, they would have a trademark identity," says Stagg. "Their name has nothing to do with the actual image she created for a T-shirt; because their identity is based on their marketing Swamp Pop to create a public awareness that Swamp Pop is a particular brand of soda. They've established consumer distinctiveness."

And though Cavitt's design preceded Cormier and Peterson's idea for a soda company, if she were to pursue production of her T-shirt, it seems she could be treading into some legally troubled waters, according to Stagg.

"There are lots of names of companies that are the same, but for completely different products so the consumer is never confused," explains Stagg.

Since Peterson and Cormier have already proven successful in marketing their product and company name, if Cavitt were to move forward on producing her T-shirts, it could arguably lead to consumer confusion that her product is piggy-backing on the success of the cousins' soda company, even though her idea came first.

"Is she trying to associate herself with the goodwill built up by Swamp Pop? Even if that's not her motive, it would depend on what consumers think," says Stagg.
Cavitt - who in addition to being an artist/graphic designer also works as a brand manager for a Lafayette company - says her primary reason for coming forward is less about recognition as it is raising awareness of intellectual property issues and the difficulties faced by visual artists.

"Artists don't have the luxury of applying for patents every time we pick up a paintbrush or a mouse," she says. "We make art, then, if we are lucky, we sell it to people who can put it in front of more people, which is exactly what I was trying to do in this case."