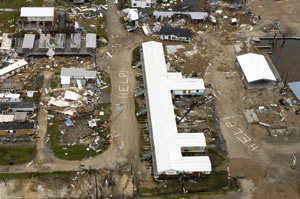 Four hundred feet below us, the water was remarkably calm. Flocks of egrets, herons and pelicans flew below, gracefully skirting the marshlands outside of Houma. We had just taken off late Wednesday afternoon in a four-seat airplane, trying to gauge the extent of the damage from Hurricane Katrina in the parishes outside of New Orleans. We flew south to Port Fourchon, one of Louisiana's most vital oil and gas production centers. The roof of the gigantic warehouse in the center of the Port was almost completely blown off.

Around Port Fourchon and Grand Isle, we saw a broken oil well freely spewing clouds of black oil into the air, leaving a sickening oil slick on the water.

Then we got to Grand Isle.

The tiny community at the end of the Gulf – where so many of us have spent joyful days and nights at the camps of family and friends – is decimated. House after house is reduced to nothing more than a pile of splinters. Someone had taken a number of boards from the endless stretches of lumber and spelled out "Help" – twice. Pilot Charlie Hammond simply said, "Wait until we get to Venice."

From Venice all the way north through Buras and Empire and the bulk of Port Sulphur, every town is under water. The storm surge came over the levee and stayed there; anyone who stayed behind to ride out the storm is surely dead. Everywhere you look is a haunting image that defies comprehension: graveyards filled with chemical spills; high schools and baseball stadiums submerged; strange bubbling fissures in the water that Hammond estimates are gas line leaks; a church's majestic steeple rising out of the brown liquid. Helicopters, cars, boats, trucks ' even huge barges ' have been tossed everywhere. From the air, they look like scattered multi-colored pieces on a board game.

After witnessing these same scenes play out over and over for 45 minutes, I spot something that makes me start yelling over the airplane's microphone system.

"Look! Look! There's a cow on that levee! That poor cow!"

As soon as it came out of my mouth, I realized the absurdity of what I had just said. Only later did I realize what probably triggered my reaction: that lone dazed cow was the first sign of life I had seen in what felt like an eternity.

By that time Wednesday afternoon, there was a 20-mile no-fly zone around New Orleans. As we flew closer, the City That Care Forgot was shrouded by its typical summer haze, the Crescent City Connection and the Superdome looking like ghostly silhouettes. Then a military jet passed in the airspace in front of us. "Time to go home," Hammond said.

Hundreds of thousands of Louisiana and Mississippi residents no longer have a home. The list of towns profoundly affected by the hurricane is staggering. Metairie. Slidell. Kenner. Bogalusa. Covington. St. Bernard. Meraux. Luling. Harahan. Pearl River. It continues deep into Mississippi, where the Gulf Coast there also bore the full brunt of Katrina, and 80 percent of the state's residents are still without power. By week's end, it was agonizingly clear that Katrina was the worst national disaster in American history – and we are living it.

And then there is New Orleans.

New Orleans. My home for a decade before moving to Carencro two years ago. Where I met and married my wife. Where both my sons were born. Where so many of my best friends live. Home to the Maple Leaf Bar, the New Orleans Saints, Gambit Weekly, WWOZ 90.7 FM, the Meters, the Audubon Zoo, The New Orleans Jazz & Heritage Festival, Jacques-Imo's restaurant and countless other entities that made such an indelible mark on my soul that they are a part of who I am, and always will be. My experience is hardly unique; just ask any New Orleans native, resident or tourist.

Once the levees broke, it felt like all those things were crumbling. The sheer volume of horrific events taking place in the Crescent City is nothing less than a full-scale assault on the heart and mind. Every day last week we woke up looking for some ray of light, only to find more black clouds descending.

Late Thursday night, an e-mail from my friend Keith Spera of the Times-Picayune arrived at my home computer. He had just made it out of New Orleans into Baton Rouge, and it was the first time we'd heard from him since the ordeal began. His note read:

"One of our remaining reporters, Gordon Russell, and a New York Times photographer drove into a gun battle between police and rioters today. The understandably edgy police – they're literally fighting for their lives – roughed up Gordon and the photographer. They're both trying to flee the city today.

"Gordon says the city's level of desperation and violence has increased dramatically since yesterday, when ex-TPer Natalie Pompilio and I were riding bikes all across Uptown and to the Convention Center. That would have been a bad thing to do today.

"It's the most horrific scene you can imagine. Where is the aid? Where is the military? Thousands of people at the convention center have received nothing – no food, no water, no instructions, no authority – for three days. Bodies lying in the street uncollected – it's inconceivable that this is happening in the United States. I interviewed so many poor, elderly and frail people trying to make their way from Central City to the convention center. Many simply will not make it. Many others will be killed by looters who are running amok. I've cried several times, and have some more to go. It's the saddest, most pitiful thing I've ever seen. New Orleans needs a massive influx of military strength and supplies – now."

New Orleans mayor Ray Nagin sent out a "desperate SOS" message to CNN earlier that afternoon, because his pleas for help weren't being heeded. President Bush, members of his administration, FEMA officials, and a large number of politicians ' Republican and Democrat alike ' showed an incredible and inexcusable lack of planning, understanding and leadership this week. Thankfully, the media isn't buying the empty rhetoric this time. When Sen. Mary Landrieu started thanking fellow senators for their "extraordinary efforts" during an interview with CNN's Anderson Cooper, he cut her off.

"For the last four days, I've been seeing dead bodies in the streets here in Mississippi," he said. "And to listen to politicians thanking each other and complimenting each other, you know, I got to tell you, there are a lot of people here who are very upset, and very angry and very frustrated. There was a body on the streets of this town yesterday being eaten by rats because this woman had been laying in the streets for 48 hours. And there's not enough facilities to take her up."

Nagin was equally blunt in a Thursday night interview with WWL 870 AM. "They don't have a clue what's going on down here," he said. "They flew down here one time two days after the doggone event was over, with TV cameras and AP reporters, with all kinds of goddamn excuses.

"Excuse my French, everybody in America, but I am pissed. They're feeding the public a line of bull and they're spinning and people are dying down here. Don't tell me 40,000 people are coming here. They're not here. It's too doggone late.

"Get off your asses and let's do something and let's fix the biggest goddamn crisis in the history of this country."

As I write this – on Friday, Sept. 2 at 11:15 p.m. – it's still unclear when the misery will end. National Guard troops are now in the city, but an estimated 50,000 people or more are still stranded in homes, hospitals, schools and on rooftops. Time is running out in New Orleans. Godspeed to all the doctors, nurses, military members, public officials and private citizens who continue to perform incredible acts of bravery and heroism to save the stranded.

"There will be plenty of time to discuss all of those issues, about why, and how, and what, and if," Landrieu told Cooper. She's right. And my gut tells me that the American public is going to hold accountable the people who let New Orleans sink to unspeakable depths.

But we must have faith. We cannot let feelings of anger, despair and helplessness deter us from the task at hand: helping the people affected by this disaster. And the Acadiana community has been remarkable in its efforts. Relief funds. Shelters. Food and clothing drives. Benefit performances. I have seven adults, two children, a baby, a dog, and four cats from New Orleans staying with my family. And our neighbors' generosity has been overwhelming. They've cooked meals for 15, offered spare rooms, brought toys and bicycles for the kids and helped carpool to school.

Unconditional support for Hurricane Katrina evacuees is flowing throughout Lafayette and our surrounding communities. With that kind of faith and spirit guiding us, we will emerge from this darkness.