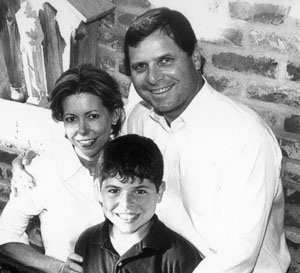 He was a fine, extraordinary man. But unknown to many of us, Winston suffered from acute depression, which led him to take his own life on Friday, April 1.

Loving husband and father to wife Mary Anne and son Alex, 16, he was an honored Doctor of Periodontistry with a successful practice here in Lafayette, a gifted and fiercely competitive athlete and scholar in high school and college (and a dominating presence on the Baton Rouge adult ping pong circuit at the age of 12), state men's doubles tennis champ at 35, big into duck and goose hunting, golfing, as well as a member of that very special breed of maniacal LSU football fans.

Winston, always the perfectionist, strived to be the very best in every endeavor, work or play. His legion of devoted guy friends could tell endless stories of Winston's sense of humor and passion for everything he engaged in. But last week when they talked of him they spoke most eloquently about his selflessness and his concern for others.

Our Lady of Wisdom Catholic Church overflowed with mourners including many of Alex's St. Thomas More friends who came to share their schoolmate's grief ' at the service on the UL campus on Monday, April 4. Winston's brother Kraemer and good friend Jerry Smith delivered elegant, tender eulogies that gave the insight many of us sought as we struggled to understand his death. The Revs. Chester Arceneaux and Howard Blessing were co-celebrants of the mass. In his comments, Arceneaux addressed the confusion about depression, the mystery that surrounds its cause and man's spiritual and medical struggle to deal with the disease and its often tragic consequences. It was a beautiful service.

To Mary Anne, who worked with us for years when we published The Times of Acadiana and again more recently on projects here at The Independent Weekly, the thoughts and prayers of those of us here are with you and your son, and with Winston's family and his many, many close friends.

As Jerry Smith said in eulogizing his buddy: Winston was the real Diel.