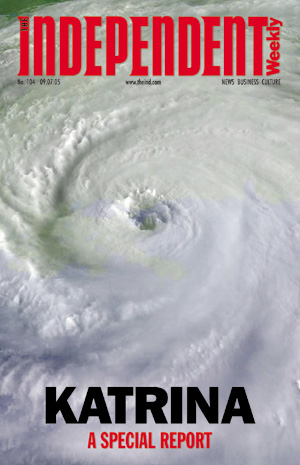 Each year, the Louisiana Press Association honors the best journalism in Louisiana with its annual awards competition. This year's contest was unlike any other, as coverage of hurricanes Katrina and Rita overshadowed the news from the first eight months of 2005. The Tennessee Press Association judged 4,765 entries submitted by 84 newspapers across the state.

Every award is an honor, but a number of the awards are especially gratifying and a testament to the dedication, hard work and creativity of The Independent Weekly's staff. Hurricanes Katrina and Rita challenged us professionally and personally in ways we never could have imagined, and I am immensely proud of the following award-winning work from our editorial team:

â?¢ In the Best Feature Story category, contributing writer Mary Tutwiler won first place for her moving account of her father's death after his evacuation from Katrina.

â?¢ The 2005 competition also included special categories for hurricane coverage, and Contributing Writer Jeremy Alford won first place in the Best Feature Story Covering Hurricane Katrina or Rita category, for his account of the chaotic communication breakdowns after Katrina. Contributing Photographer Robin May won first place in the Best News/Feature Photo Covering Hurricane Katrina or Rita for her poignant picture of a soldier carrying an elderly woman in New Orleans.

â?¢ We also swept the Individual Feature Writing category for three 2005 cover stories: Shala Carlson's feature on Abdalla's closing won third place; Lili LeGardeur's chronicle of the tumultuous state of the sugarcane industry won second place; and Michael Tisserand won first place for his account of spending the night at the Cajundome in the wake of Hurricane Katrina.

â?¢ The Independent Weekly Photo Editor Terri Fensel is one of the most honored photographers in the state, and this year was no different. Fensel won first place in the Best News Photo and Best Photo Feature categories ' for a portrait of a Delcambre family struggling to rebuild after Rita, and for photos of students and teachers at a one-room schoolhouse in New Iberia for evacuee children. She also took top honors in the Individual Black-and-White Feature Photo category.

In addition to honoring The Independent Weekly's hurricane coverage, the judges also praised a number of stories we did prior to September 2005. Managing Editor R. Reese Fuller won first place in the Best Continuing Coverage of a Single News Event for stories he wrote on the bizarre saga of mortgage company Coast Capital leaving customers' private information on a computer that inexplicably wound up at a Goodwill store. And we won the coveted Community Service Award for our ongoing coverage of Lafayette Utilities System's effort to use fiber-to-the-home technology to offer cable, phone and Internet services to local residents. We also won second, third, and honorable mention awards for Investigative Reporting, with exposés on the proposed UL Lafayette horse farm deal, real estate battles at Cypremort Point and the staff shakeup at the UL Art Museum.

Kudos also to The Independent's production and advertising departments, which won 11 awards for their top-notch graphic design. Art and Production Director Jason Roy is the unsung hero of The Independent staff, as it's his talent and vision that makes our stories (and advertisements) visually appealing.

The judges appreciated our sense of humor, too; Greg Peters won first place for Editorial Cartoon for one of his "Snake Oil" strips excoriating the Lafayette City Council.

I'd also like to extend special congratulations and thanks to our colleagues at The Times-Picayune in New Orleans, which rightfully earned Newspaper of the Year in its division. Their work during and post-Katrina has been nothing short of heroic, and their continued vigilance and dedication to New Orleans and the city's recovery continues to be an inspiration.

Most importantly, these journalism honors ultimately belong to you ' our readers. Last year, you let us into your homes, businesses, shelters and churches. You trusted us to tell your stories, and we hold that bond sacred.