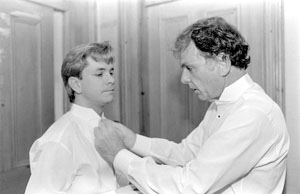 The morning after I arrived in November, Dad wanted to work in the yard. There was clover and crab grass snaking around the yellow hibiscus in a flower bed he planted more than a decade ago when he and my mother moved to a house on Florida’s east coast. Their backyard opens up to more than 5,000 acres of wildlife refuge and protected savannas.
I brought out a lawn chair for Dad and sat down on the ground next to him. We worked mostly in silence, the only sound our hands uprooting vines and weeds. Under the wood chips, I kept finding strange, furry white circles that looked like miniature butterfly cocoons. Their root system looked like bleached hairline tentacles that snaked everywhere through the dirt.

“Do you know what these are?” I asked. “Are they mushrooms, or a fungus?”

“I’m not sure. Have you seen the trowel?”

We went back to digging. I knew he was only strong enough to work for 30 to 45 minutes.

“I’ve set up a meeting with our attorney on Thursday morning,” he said. “I want you to meet him, and this way you’ll be familiar with all the documents and wills when I die.”

It had barely been a year since we were stunned to learn that he had a glioblastoma, the most aggressive type of brain tumor. Since the initial diagnosis, he’d endured two brain surgeries, intense radiation treatment, one Cyberknife procedure, oral chemotherapy, and an experimental blood-infusion chemotherapy. The most recent MRI report had not brought the news we’d all hoped for.

So we worked in one of his gardens that week, talking intermittently about the warmth of the sun and how good the slight breeze felt on our faces, and his imminent death at the age of 68.

H. Thomas Jordan Jr. graduated from the University of North Carolina with a bachelor’s in English and served in the U.S. Army from 1960-1963. From there he followed his father, Harry Thomas Jordan, into the furniture business and worked his way up to regional sales manager for Drexel Heritage in a short time. At one point Dad was responsible for an 18-state territory from the Midwest to New England and parts of Canada. Monday mornings he’d often load up his car with fabric samples, say goodbye to my mom and brother and I and be gone for three to four days, and every April and October he’d be in North Carolina for two weeks for the semi-annual furniture market.

But nights, weekends, vacations and holidays were all ours. We flew kites, built glow-in-the-dark monster models, checked out stacks of books from the library and sledded down giant hills. He taught us every board game and card game known to man, and indulged us by trying his hand at Space Invaders and Pac-Man when he would have rather been watching Wall Street Week With Louis Rukeyser or Meet the Press. And no matter what day it was, whenever I had a big Little League game or an important state tennis tournament or conference showdown in high school, I’d step up to the plate or the baseline and see him nodding encouragingly from the sidelines.

His discipline was always steady, measured and unwavering. He never yelled, never hit me. Around sixth grade, I started to show signs of acting more like Jimmy Connors than Bjorn Borg in a tennis tournament. I slammed my racquet into the ground after losing a point, cracking the frame and rendering it useless. I walked off the court and told Dad I needed another racquet. He just looked at me sternly; I walked back out and told my opponent I was forfeiting the match. He kept that ability as I got older and wrestled with adult crises; the times that I could tell I’d disappointed him, I knew I was headed down a wrong path.

From the time my writing started to be published almost two decades ago, his feedback always mattered the most to me. I’d send him my stories, and on occasion he’d mail them back, with his comments in red ink throughout the margins. Dad was always gentle with his observations; over the years I realized that his values always came through in his editing. Write honestly and clearly, he’d say. Write what you believe, and write from your heart.

My parents had not flown in 15 years, but they got on a plane and came to visit in August, right before Dad’s second brain surgery. He wanted to see his grandsons. He also wanted to come by The Independent Weekly office to meet the staff, and personally tell all my co-workers how proud he was of their hard work and dedication, especially after hurricanes Katrina and Rita.

Dad made it through Christmas and my brother’s birthday, then died on Dec. 30. Soon I’ll go back to Florida for a week to help my mother and brother honor my father’s final wish, and scatter his ashes in the savannas he loved so much.

The week before he died, I was having one of those nights that were all too frequent in 2007, where I’d stare off into space and my chest felt tight. My 6-year-old son Evan came to recognize that mood, and he and his 5-year-old brother Quinn and my wife Cindy all pulled in close to me as we read bedtime stories. Out of nowhere, Evan said, “Don’t be sad and upset about Pop-Pop, Daddy. When Pop-Pop dies and goes to heaven, we’ll all have a guardian angel.”

I realized then that my father’s legacy will live on. His grandsons are already showing that they’ve inherited more than their grandfather’s radiant blue eyes.