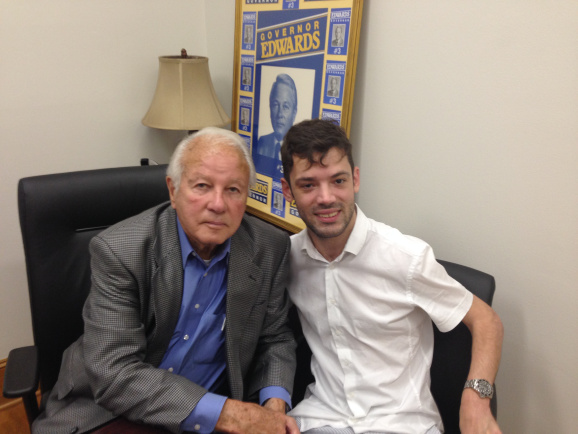 His life's story, which is exhaustively documented in Leo Honeycutt's authorized biography, reads like a Greek or Shakespearean tragicomedy. Depending on who you ask, Edwin Edwards is either the most beloved politician in Louisiana history or the epitome of political corruption. He is either a good and decent man who was unfairly targeted and railroaded by his ideological foes or a loathsome and ethically bankrupt politician who ultimately became a victim of his own hubris. The truth, in my opinion, is not so clearcut.

Although his biography was published a few years ago, no one should mistake it for an obituary: Edwin Washington Edwards is still very much alive, and if he has it his way, the final chapters won't be about prison and falling from grace; they'll be about redemption and vindication.

The odds may be stacked against him, but currently, Edwards is ahead in the polls in his bid to represent Louisiana's Sixth Congressional District. And it increasingly appears that if you are an Edwards' supporter, you'd want his main challenger to be a far right radical whose views on science, education, and basic civil rights have been characterized as extremist and divisive; it's the type of candidate that Edwards has, historically, done well against.

At the height of his power, Edwards was a showman and a dazzling orator, capable of moving audiences in both English and Cajun French, evoking a brand of Louisiana populism reminiscent of his most famous predecessor, Huey P. Long. Like baseball great Yogi Berra, a man born only two years before him, Edwin Edwards is also widely known for his quick, playful, and, at times, irreverent wit and his penchant for the one-liner, a talent that, most assuredly, he still possesses.

Today, at the age of 87, Edwards may not be as much of a firebrand as he was 20 years ago, and it's impossible to overlook the signs of aging. But he does come across as a sort of an elder statesman, albeit one with a checkered past. Before we began our interview, he warned me that he had forgotten his hearing aids; I'd need to sit close and speak up.

The interview took place at his campaign headquarters, located in an upscale, one-story office park in Baton Rouge, and greeting us at the office's front door was the Edwards' wife, Trina - an ebullient blonde 36-year-old from Alexandria dressed smartly in Brooks Brothers. Eleven months ago, Trina gave birth to Edwards' fifth child (and her third), Eli Wallace Edwards; her pregnancy was chronicled in the short-lived and widely-panned A&E reality television show, "The Governor's Wife."

Trina and I briefly met a few years ago, and perhaps not surprisingly (considering we're around the same age and from the same hometown) share several mutual friends, including the producer and creator of the A&E show. Her marriage to Edwards may be unconventional, but according to those who know her well, the two are very much in love. "That show didn't do her justice," one of her friends recently told me. "She's sharp as a tack, and if it were up to me, she'd be the candidate. She's very smart."

Although her husband is the candidate and although she is a registered Republican, the campaign is obviously a team effort. When I requested an interview with Gov. Edwards, he told me that Trina thought I was "too liberal for her but probably right for me." She is not only the campaign's treasurer; she is also, in many ways, its gatekeeper.

That said, there were no ground rules set for the interview. No topic was off-limits. I voluntarily provided him with a broad list of issues I wanted to discuss - coastal restoration, education, health care, abortion, and history - but we ended up talking about much more.

After exchanging pleasantries with Trina, Gov. Edwards summoned me into a sparse back office. While my friends set up the video equipment, I took a seat in front of his desk. I reminded him of my Central Louisiana connections and how, for many in Central Louisiana, he was still somewhat of a hometown hero.

"Are you familiar with Marksville?" he asked.

"Of course. I've spent a lot of time in Marksville."

"Are you familiar with Moncla?"

"I don't think so. But I do know some people in the Moncla family."

"Well, I'm from Moncla," he said. "A small town outside of Marksville."

Before the camera began rolling, as I mentioned earlier, Gov. Edwards said he had forgotten his hearing aids, so, instead of sitting across the desk from him, we decided it would be easier if I sat directly next to him.

For those of you who don't know, I was born with cerebral palsy, and I carry around some spasticity, particularly in my upper body, which sometimes affects my balance and movement. It took me a few seconds to collect myself before I moved closer to Gov. Edwards' ear. "You can't hear well, and I can't walk right," I explained to him.

"No, I have cerebral palsy," I said. He then asked me a series of questions about my experience as a disabled person: Was my condition degenerative, or could I get better? "It's not degenerative, and the stronger I get, the better I get." Was I born with my disability or was it something that I was diagnosed with later in life? "Something I was born with."

Could I use a computer and type?

"Well, you've got more balls than I've got," he quipped.

It also became abundantly clear to me that, despite what his critics may say about him, Edwin Edwards is still a natural at this stuff: A charmer and a cajoler, a man who recognizes that empathy and humor are the most powerful weapons in any arsenal, and that, more than anything else, politics is the art of friendship.

I wanted to ask Gov. Edwards a series of serious questions about the most pressing issues facing Louisiana today. We skipped around quite a bit, and although my questions, at times, may have been a little disjointed, we managed to cover a ton of ground.