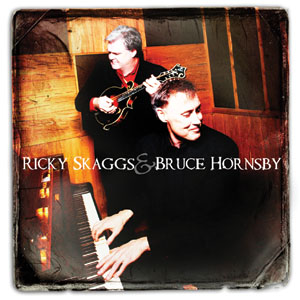 Ricky Skaggs’ recently released CD with Bruce Hornsby represents one of the few times in recent years that the hardcore bluegrass community hasn’t embraced a new Skaggs release. Ricky Skaggs & Bruce Hornsby has been a hit in just about every sector except with the International Bluegrass Music Association. “They’ve got a chart that they do in their magazine, and we’re not even on it,” Skaggs says in a recent phone interview, noting the album topped Billboard magazine’s bluegrass chart. “So I think it’s just jealousy on their part. They’re not playing it very much. But hey, that’s all right. It just shows their ignorance.”

For Hornsby, this reaction is nothing new. The bluegrass community was vocal in its displeasure when Hornsby (known for his pop success and adventurous improvisation and collaborations) won a Grammy in 1989 for his bluegrass version of his hit song “Valley Road” on the Nitty Gritty Dirt Band’s album Will The Circle Be Unbroken, Vol. 2.

Just as there’s no crying in baseball, it seems there’s no room for piano (Hornsby’s instrument) in bluegrass. The Ricky Skaggs & Bruce Hornsby CD is one of the rare times piano and organ have been incorporated into the genre primarily known for mandolin, fiddle, banjo, bass and guitar instrumentation.

Perhaps some hardcore bluegrass fans aren’t quite sure what to make of the duo’s bluegrass version of the Rick James hit, “Super Freak.” It makes for a rousing — not to mention hilarious — finish to the Ricky Skaggs & Bruce Hornsby CD, as fiddles, guitar and mandolin rollick along to James’ suggestive lyrics, sung by Hornsby and guest vocalist John Anderson (in the laconic drawl that is his trademark, no less).

In any event, Skaggs can easily brush off any lack of enthusiasm from bluegrass fans because of the overwhelming positive response from reviewers elsewhere; he hardly needs to prove his credibility with bluegrass fans at this point in his career.

A native of Cordell, Ky., Skaggs gained considerable notice in the 1970s, first in Ralph Stanley’s bluegrass group and later as a member of Emmylou Harris’ Hot Band, before moving to Nashville to launch a solo career with the hope of bringing bluegrass into the country mainstream. But to land his deal with Epic Records, Skaggs had to stick to songs the label deemed as country.

Despite that restriction, Skaggs partially achieved his goal, prominently incorporating traditional instrumentation and touches of bluegrass into hit songs such as “Highway 40 Blues,” “Uncle Pen” and “Country Boy,” as he became one the genre’s leading stars in the early 1980s.

Skaggs saw his success wane in the early 1990s as country veered toward pop, and in 1997, he formed his own record label, Skaggs Family Records, and chose to return full time to bluegrass. The move back to bluegrass has only enhanced the 12-time Grammy winner’s stature as one of bluegrass music’s most gifted artists, talented players (Skaggs’ instruments include mandolin, guitar, banjo and fiddle) and his backing band, Kentucky Thunder, as one of the hottest live units around.

The Ricky Skaggs & Bruce Hornsby CD, Skaggs says, was one of the most memorable projects of his career. Skaggs met Hornsby when they were on the same concert bill in the early 1990s and had periodically crossed paths in the following years. In the late 1990s, the two took their mutual admiration into the studio, as Hornsby collaborated with Skaggs on a version of “Darlin’ Corey” for Big Mon, Skaggs’ 2000 tribute album to bluegrass pioneer Bill Monroe.

“Every time we got together, we felt like sparks flew and that there was a real magic that happened,” Skaggs says. “You don’t always get that with guests that you have. You don’t really mesh with everybody. But there was something about Bruce’s music that I really, really loved, and the same with me and my music.”

The magic reappeared as soon as work began on the Ricky Skaggs & Bruce Hornsby CD.

“It was total joy from the start to the finish,” says Skaggs. “There was no arguing, there was no debating, there was no ‘He’s lost his mind.’ All the songs that Bruce brought in, I felt that they really fit well together. I think he had that very well planned out in his mind. I didn’t pick his songs. And he didn’t really pick mine. So it was like whatever you feel like you want to bring to the table, we’ll both look at it and we’ll both agree, obviously, on it. But as soon as I heard his selection, we were totally in sync with that, and mine as well.”

Hornsby expresses similar sentiments in a separate interview. “The bluegrass record was very enjoyable to make, really pretty easy to make, because Ricky Skaggs’ band, Kentucky Thunder, is so great. They’re virtuosos,” Hornsby says. “It’s such a pleasure to play with these guys. They come into a studio and are such pros. They could just put it down so easy. You don’t have to worry about whether it’s grooving or whether the playing is good  whether you’re going to get a good take. It’s just going to be good.”

The music on the Ricky Skaggs & Bruce Hornsby CD reflects the chemistry and talents of the musicians involved. Skaggs, Hornsby and Kentucky Thunder deliver spirited versions of traditional tunes (“Across The Rocky Mountain”) and Hornsby originals (including a stately version of his pop hit “Mandolin Rain”).

Hornsby’s piano, meanwhile, blends in quite nicely on songs like the Skaggs-penned instrumental “Stubb” and “Come On Out.”

While the entire recording session was fun and rewarding, “Super Freak” was a highlight. According to Skaggs, Hornsby had gotten the idea for the song years ago from a keyboardist with either Delbert McClinton or Huey Lewis, but didn’t include the song on his demo of potential tunes for the CD.

“We got in there one day, and he says, ‘All right boys, are y’all ready to do the ‘Freak’?” Skaggs recalls. “We looked at each other and were like, ‘Are you really going to do this?’ So he played a little demo he had done for it over at his studio. We just hooted. It was so funny. And we started hearing banjo lines and acoustic guitar lines. We just thought this is just too funny and spoofy not to do.”

It’s a good bet “Super Freak” will be in the set when Hornsby, Skaggs and Kentucky Thunder play this Friday at the Heymann Performing Arts Center.

“We’ve got about 12 to 15 songs worked up that we can do, and most of the things are off of the CD,” Skaggs says. “But we’ve got a really great version of ‘That’s Just The Way It Is’ that is so bluegrass. We did it on the CMT Crossroads (a special aired in February), and it was just one the highlights of the show. It just works so well bluegrass. I sing it and he comes in and sings a verse. So it’s kind of like my treatment of his song. And then he does his version of ‘Uncle Pen.’ We just throw things back and forth, and it’s really great.”