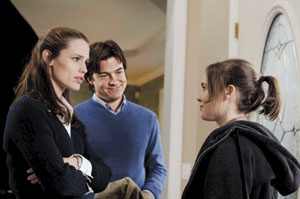 Adoptive parents Vanessa (Jennifer Garner) and Mark Loring (Jason Bateman) don't quite know what to do with birth mother Juno.

Maybe somewhere, there really are kids who have whipsmart mouths like the wild one on Juno MacGuff. The 16-year-old high school misfit with the inch-thick, self-protective, candy-coated shell practically needs to come with her own dialogue decoder ring for the first stretch of the movie that bears her name.

When Juno (Ellen Page) half-bounces, half-trudges into a corner convenience store to purchase her third-time-today-please-let-the-first-two-be-flukes pregnancy test, her banter with clerk Rollo (Rainn Wilson) never stops to take a breath. To be fair, it’s the two of them together that push past the tipping point. (Imagine several minutes of back and forth along the lines of Rollo’s “This is one doodle that can’t be undid, home skillet,” and you start to get the painful picture.) Maybe on her own, Juno would seem less annoying and more interestingly anomalous. But when she immediately heads home to call her best friend Leah (Olivia Thirlby) to break the news and their ensuing “conversation” continues in much the same vein — on Juno’s hip-to-be-square hamburger phone, no less — it’s fair to start wondering why everyone is loving this movie so much. It’s all a little too affected to actually be affecting.

And yet, by the finale of the film, which thankfully slowly sheds just the right amount of the self-conscious smarts that smother it so early on, it’s easy to see why first-time screenwriter Diablo Cody has set Hollywood on fire with this little movie of hers. Juno turns out to be delightfully oddball and sincere, her Minnesota world populated by a band of characters as wonderfully weird and warm as she is.

It begins with a chair, Juno tells us in voiceover, by which she means the chair that was the site of her moment of spontaneous, sweetly awkward sex with best friend and bandmate Paulie Bleeker (Michael Cera). Now, she finds herself pregnant. She first visits Women Now, an abortion clinic whose lone protestor is a fellow high school student. The two exchange quirky pleasantries and perspectives, an original and completely oddball scene. Once inside, Juno decides this is not the choice she wants to make and heads to see Leah, who peppily suggests looking in the Penny Saver for adoptive parents. The two find a couple, the Lorings (Jennifer Garner and Jason Bateman), and then it’s time to inform Juno’s parents, gruff heating-and-cooling guru Mac (J.K. Simmons) and sweatered stepmom Bren (Allison Janney). As she navigates her displeased but supportive parents and these other imperfect parents she’s picked for her child and Paulie’s sweetly blank uncertainty, Juno slowly becomes the adult in this adult situation she’s stumbled into.

Director Jason Reitman (the interesting but ultimately overrated Thank You for Not Smoking) has a great cast to move around a spectacularly set-designed screen, a beneficence that soon forces a too-cute-by-half soundtrack and all that early verbosity into the background. Page (X-Men, Hard Candy) pushes past all those front-loaded lines she has to deliver to a very fresh, fragile, intelligent performance. There’s one moment behind the wheel of a minivan, when Juno has had an upsetting encounter, one that shakes her faith in the decision she made too many months ago, where Page’s emotions are so true that it isn’t her crying that connects, it’s her impossibly trembling cheek. That can’t be faked.

Page is met and more than matched by her fellow players. Mumbling, sweet, real Cera (Superbad) was one of last year’s greatest film finds. The always amazing Janney (The West Wing, The Chumscrubber) is a strange stepmom, a dog-loving nail technician unafraid to take anyone to task, be it “my dumbass stepdaughter” Juno or a rude ultrasound technician. Garner is Juno’s unsung hero, her barren Vanessa a messy mixture of perfectionism and fear and thwarted maternal instinct, while Bateman gives frustrated rocker husband Mark a narcissistic niceness that’s fast becoming his trademark.

It’s the superb Simmons (Spider-Man), though, who delivers the single set of lines that is at the true heart of Juno. When a no-longer cocksure Juno asks if two people can ever really stay together forever, he keeps tinkering with his air-conditioner part on the kitchen table and gives a sweet, sad — and, given all that has come before, refreshingly simple — answer. More so than any witty wisecrack she penned, this father-daughter moment is the real reason Hollywood needs to give Diablo her due.