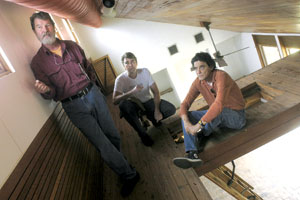 Eddie Cazayoux (left) and UL architecture professors Geoff Gjertson and Hector LaSala (right) explain the design principles behind an experimental house built in 1982. The three men are part of the university’s team to build BeauSoleil, a solar house for an international competition sponsored by the U.S. Department of Energy.

On a blustery and gray afternoon, three UL architecture professors look over the 1,320-square-foot house built on the university’s 800-acre experimental farm in Cade. The house is a model for a sustainable dwelling that uses a minimum amount of energy. Professors Hector LaSala and now-retired Eddie Cazayoux constructed the house in 1982 for $27 per square foot — with the aid of student labor — and created a house that was 80 percent more energy efficient than a conventional home. For their work on the house, Cazayoux and LaSala won the Energy Design Innovation Award from the U.S. Department of Energy in 1983.

“As human beings, we are who are because of our natural environment,” Cazayoux says while standing with LaSala and UL associate professor Geoff Gjertson. The research house uses building materials to help cool and heat the house instead of the traditional means of simply heating and cooling the air. LaSala notes, “We wanted to produce a house that allows you to interact with the environment in a healthier way than just using a thermostat.” Using some of the principles they’ve learned, these three men are part of a university team dedicated to building another house that may garner them another national honor.

Imagine a brand new 800-square-foot home like this one, that looks and feels like it belongs in south Louisiana and that’s within financial reach of a Louisiana resident taking home the median $40,000 a year. “If we can design a prefab house that’s modular and energy efficient, that’s what we need,” says LaSala.

In the Solar Decathlon, a competition the U.S. Department of Energy’s Office of Energy Efficiency and Renewable Energy sponsors, 20 teams of university students will compete to design and build an energy-efficient house powered by solar energy. The UL team — with its entry dubbed BeauSoleil — is the first university in Louisiana to compete in the two-year long process that culminates in 2009. As a participant, the team will also receive a $100,000 grant to help offset the cost of research, development and construction of the house.

Each team must design and build a house no larger than 800 square feet that is powered solely by the sun’s energy; the building must also be attractive to consumers. According to the Solar Decathalon’s guidelines, the homes “must maintain a comfortable temperature, provide attractive and adequate lighting, power household appliances for cooking and cleaning, power home electronics, and provide hot water.” In addition, the structures must produce enough energy to fuel an electronic car. In October 2009, the 20 teams will construct their prototype homes on the National Mall in Washington, D.C., and compete in 10 different categories to determine the winner.

Gjertson, the UL team’s coordinator, says the school will incorporate the entire process into its curriculum. Students studying interior design, industrial design, engineering, computer science, renewable resources and business will work together on the project. “It’s just a great learning opportunity for the students to be able to work in an interdisciplinary team and collaborate and experience all the different aspects of design, funding, construction and testing,” Gjertson says. “This project seems to embody a lot of different interests and goals that not only we have at the university for students to learn but also in the community. There seems to be more interest in alternative energy and green design today, as well as affordable housing and hurricane recovery. We kind of see this thing as bigger than just a house.”

In May, students will unveil the final design idea to the public. The early cost estimate for the whole idea comes in at $400,000, with an additional $115,000 of in-kind donations. “The prototype always costs more,” Gjertson says. The team knows it won’t be able to rely solely on the university for funding the project and has been working with award-winning local graphic designer Megan Barra to help brand, market and sell the idea to the community. Grammy Award-winning Cajun band BeauSoleil has also agreed to lend its name and its support to the project.

Energy efficiency will be just as important as running the house on solar energy. Principles that have already been applied and tested in the Cade research house will be used in BeauSoleil. Passive systems like ventilation systems and radiant cooling systems that use water and air circulating through the floors, walls, and ceiling can cool and heat the house. “The idea is to get the cost down to $100,000 per home,” Gjertson says.

While meeting all those requirements is already a tall order, Gjertson says the house will also reflect south Louisiana’s vernacular building traditions. “We want it to really be about Louisiana,” he says. “We want it to look like a Louisiana house. We want it to be simple, but to have the potential for variety and customization so that if it does go into production, it’s not the same thing you see over and over.” The school plans to work with the modular home builder LAMSH in St. Martinville to help build the structure.

The progressive school project also has the potential to take on a life of its own. “We don’t want to see this thing up on a shelf once it’s done,” Gjertson says. “We would like to put this in production and not for profit. We would put the money back into more research and development to continue producing these. If we have to build all of this housing in Louisiana and everywhere else, it needs to be sustainable. We can waste a lot of money — as you can see with the FEMA trailers that are full of formaldehyde. Even just making logical decisions with materials is really key. It needs to use materials that aren’t toxic and that are renewable. It needs to be energy efficient, and ideally it needs to produce its own energy. That’s the ultimate goal.