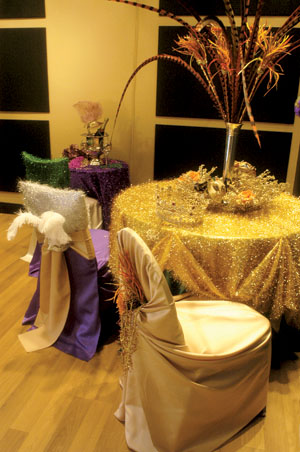 With an early Mardi Gras season already ramping up, folks might be too busy chasing beads to go home and decorate for their Carnival parties — and that’s where Kim Veillon comes in. Veillon has recently brought his design concept, It’s A Wrap, to Acadiana following a stint in New Orleans. He specializes in high-end linens that will transform a room into an event.

Lafayette native Veillon originally trained to be a floral designer and was part of Lafayette’s early downtown renaissance with his former Les Jardins store. “I was one of the first [downtown] merchants, back in the 1980s,” he says. Working in New Orleans and New York opened Veillon’s eyes to a larger world of fabric design, which he’s now bringing back to his hometown.

He’s combined forces with Tommy Champagne, owner of Tommy’s Downtown Flower Market. (Both businesses are located inside Jefferson Street Market.) Champagne coordinates centerpieces with Veillon’s linens, and together, they forge a concept for an entire room. “I can do something as small and intimate as dinner for two in your own dining room,” Veillon says, “or we can light up the Cajundome.”

Veillon — a past King of the Mystick Krewe of Apollo — is an unabashed Carnival aficionado. “I’ve been in love with Mardi Gras my whole life,” he says. Veillon imparts his passion into the table toppers, chair slips, napkins, linens, satins, and brocade incorporated into his design. “I want it to be over the top,” he adds. “I love the decadence. Anything opulent, decadent, gorgeous, beautiful-over-the-top, I’m there.”