Little Chenier is always as visually beautiful - and sometimes just as slow-moving - as the many muddy waters that crisscross south Louisiana. 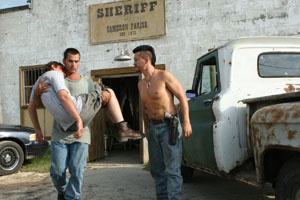 If his bayou life appears idyllic from the outside, on the nitty-gritty inside, things don’t ever seem to really go Beaux Dupuis’ way. The young Cajun (Johnathon Schaech) squeaks out a living running a barely-getting-by bait shop, selling shrimp to his boating neighbors and visiting fishermen. He looks after his mentally challenged little brother Pemon, their mother having left the day after Pemon (Frederick Koehler) was born. Whenever Pemon asks him to, big brother Beaux dutifully reminds him how he has the hair and eyes of this mother he never knew.

One good reason the lovely Lucy might have left her two sons with little more than an ethereal photograph to remember her by was her hard-drinking, hard-hearted husband Tuck (Marshall Bell). Tuck’s never taken care of his sons, disappearing for weeks at a time, popping up only to raid the busted cash register of the bait shop with a boozy floozy on his arm.

If Pemon inherited his mother’s features, Beaux seems to have acquired her bad luck in love. One night not so long ago, his girlfriend Marie-Louise (Tamara Braun) up and ran off to Baton Rouge to marry Carl Labauve (Jeremy Davidson), a deputy sheriff so surly and sluggish that not even his own parents seem to like him very much. And Marie-Louise’s heart certainly doesn’t seem to be in her fly-by-night, mystery match; she runs away to rendezvous with Beaux whenever she can and, when she can’t, simply walks around, trying her best to fade into the mossy scenery and to shrug off Carl’s possessive and public displays of affection. Carl, meanwhile, spends most of his time shadowing his nice-guy sheriff dad (Chris Mulkey), who seems to have a kind word for everyone but his son, and the rest of his time bullying Beaux, his rival for Marie-Louise.

Trouble, roiling so long under the waters of Little Chenier, finally breaks to the surface. A calf is found beaten to death on a woman’s property, and Carl immediately suspects Pemon, only too ready to haul off a Dupuis boy to jail; he’s held back only by the measured hand of his dad, an old friend of the family who feels protective of the young man. But soon after their dead-animal discovery, sheriff Kline confronts two young toughs from Opelousas who have shown up in the area, obviously looking for more than just crawfish and beer. And just like that, things begin to slowly build to confrontation.

Emphasis on the “slowly.” The strength of Little Chenier, co-written by director Bethany Ashton Wolf and Jace Johnson, is not its focus or forward propulsion. Too much time is taken to set up the little worlds of Little Chenier. The snail’s pace of the telling and the loose editing of the story conspire to make the film feel convoluted; better timing and a tightening-up all around would have better revealed its worthy and complicated narrative nature.

So complicated is Little Chenier that there is no single main character. It’s a true ensemble effort, and that’s best. Koehler is in constant jeopardy of overplaying Pemon, his accent creeping into Bobby Boucher territory more than once. But Schaech takes a more laissez-faire approach to sounding south Louisianian, and it works. He does well enough with the patient, put-upon Beaux that it’s easy to wonder where he’s been since playing the self-centered artiste in That Thing You Do! so many years ago. Minor characters — most notably Clifton Collins Jr.’s friend-in-deed T-Boy; Isabella Hofmann’s wearily maternal Gwenivere Labauve; and young altar boy Jack Friedberg — offer moments of humor and humanity.

What lasts, however, is what is tragically no longer there. Shortly after filming on Little Chenier wrapped, Hurricane Rita ravaged the south Louisiana coastal communities where the film was shot, destroying many of the movie’s locations. That strange timing, in and of itself, would make Little Chenier an important postcard from the past. The film’s greatest gift, however, the stunningly rich photography of cinematographer Tanja Koop, makes Little Chenier something more. And it’s not all in the perhaps more-easily-captured beauty of the swampland scenery, which is both impressive and impressionistic. That “something more” appears in the Christmas lights that twine around the rough-hewn posts of the open-air bait shop, the shadowy boats lazily banging into each other under a night sky lit with fireworks, the handwritten “fresh boudin” sign and rows of Abita beer in a roadside marina shop — the finely drawn details of life in the watery enclave of lost Little Chenier.