Gay and bisexual men, who are banned for life by the FDA from donating blood, are being urged to make a statement Saturday.

Gay and bisexual men, who are banned for life by the Food and Drug Administration from donating blood, are being urged to make a statement Saturday by bringing a straight friend (or lesbian for that matter) to donate on their behalf.

The National Gay Blood Drive is being held this weekend across the country, including Saturday from 10 a.m. to 2 p.m. at Saint Street Inn here in Lafayette. Drives are also scheduled for Baton Rouge and Shreveport but, amazingly, not in New Orleans according to the event's website. 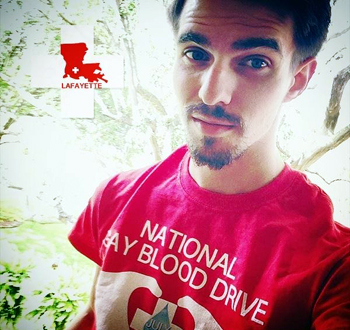 Locally, the blood drive is being conducted by United Blood Services through the coordination of UL Lafayette public relations major Jared Luent, who tells The IND his inspiration for participating is personal.

"I grew up watching my mom donate regularly, and I could not wait to do the same once I was old enough," he says. "I didn't know that this ban existed, and when I found out, I was highly discouraged and disappointed."

Yes, you guessed it: Jared is gay. And can never donate blood. Luent believes the ban, issued in the early 1980s at the height of "AIDS hysteria" in the United States, should be reconsidered. According to the FDA's website, "Men who have had sex with other men (MSM), at any time since 1977 (the beginning of the AIDS epidemic in the United States) are currently deferred as blood donors. This is because MSM are, as a group, at increased risk for HIV, hepatitis B and certain other infections that can be transmitted by transfusion."

Luent believes that's an outdated position that deserves reconsideration. "The policies in place were enacted in 1983, and have yet to be revisited to reassess them with updated science and information," the New Iberia native says. "Many independent blood organizations such as United Blood Services are in fact in favor of just a one year deferral, as opposed to a lifetime ban."

The point of the National Gay Blood Drive, Luent adds, is to raise awareness about what many believe is an antiquated FDA postion on blood donations from gay men. "While some may not be able to, why exclude that many potential donors when blood supplies are constantly low?" he asks rhetorically.

Gay men who bring an ally to the drive will snap a photo of the blood donation, which the national group will use in a social media campaign. Supporters can also sign a WhiteHouse.gov e-petition here.

If you're reading this outside Lafayette - this is the interwebs after all - and are looking for an NGBD location near you, click here.