The council approved an introductory ordinance two weeks ago watering down the zoning ordinance. If it approves it as a final ordinance on Tuesday, well, anyone can put up a sign in their yard or at their business for any future election. 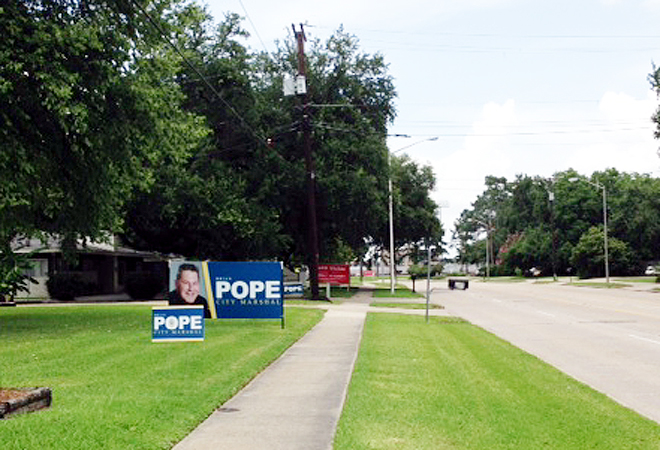 Political signs have been illegally proliferating along North College Drive for weeks.

Proposed amendments to the part of Lafayette's zoning ordinance pertaining to political signs, headed to the City-Parish Council at its meeting Tuesday, would make official what is currently an illegal proliferation of candidate signs across the parish. But the Lafayette Zoning Commission is angling to head the issue off at the pass.

The proposed amendments would wipe away the provision that temporary political signs can only be put up within 90 days before an election and that they must be taken down 10 days after; instead, residents and business owners would be able to put up signs anytime before an election and would have a month to take them down. The purpose of the old zoning ordinance was to reduce visual pollution in the city. But district attorney candidate Keith Stutes, whose campaign has been distributing signs since March - more that double the current legal limit (shouldn't a candidate for a top law-enforcement gig in Lafayette have known this just sayin ...?) - raised 1st Amendment free-speech issues about prohibiting political speech, which the signs admittedly are.

The council approved an introductory ordinance two weeks ago watering down the zoning ordinance. If it approves it as a final ordinance on Tuesday, well, anyone can put up a sign in their yard or at their business for any future election. That means not only next year's gubernatorial tilt but, in theory anyway, an election a decade or more from now. Are y'all ready for "Hillary 2016" signs in your neighborhood for the next two-plus years? Yeah, we didn't think so.

The Zoning Commission signed off on the amendments to the ordinance grudgingly and sent council members a letter that reads in part:

Despite the vote in support, the Commissioners present expressed concern that the amendments effectively gut the sign ordinance as it relates to political signs. The amended law leaves our community exposed to increased visual clutter with candidates for political office having no time limitations on when they may place their signs in advance of an election. Candidates for the 2015 Parish President and Council races could put out their signs today.

Legal counsel concurred with Commissioners' statements that it would be best that the entire sign ordinance be reviewed and rewritten as part of the Unified Development Code process. Given stated interest from Commissioners and based on legal counsel that the Zoning Commission has the authority to initiate a rewrite of the sign ordinance, we've requested that this be an agenda item when the Zoning Commission next meets on July 21.

A source tells us City-Parish President Joey Durel considered vetoing the amendment ordinance but reconsidered after he became aware of the Zoning Commish's plan to undertake a rewrite of the entire zoning ordinance pertaining to temporary signs without differentiating between political and non-political signs, which it plans to do at its July 21 meeting.

Commission Chairman Bruce Conque says there is legal precedent for placing restrictions on temporary signs as long as political signs are not differentiated from other signs like those touting a coming entertainment event such a circus or, God forbid, monster truck pull.

"The Unified Development Code could and should include a comprehensive sign ordinance that would address both community and legal standards," Conque says, adding that such an ordinance "should reflect the aesthetic values of the community."

The issue, however, would be mute for the fall elections: If the council approves the amendments to the political sign ordinance Durel would have 10 days to sign off on it or simply let it become law by inaction; by then we would be within the 90-day window before the elections for D.A., etc.