Anti-abortion advocates are getting "smarter" in their ongoing attack against Roe v. Wade, and in recent years have effectively been employing one of two new tactics, as witnessed in Louisiana during this year's legislative session.

Anti-abortion advocates are getting "smarter" in their ongoing attack against Roe v. Wade, and in recent years have effectively been employing one of two new tactics, as witnessed in Louisiana during this year's legislative session.

In a recent report from Slate.com, contributing writer Amanda Marcotte examines the trend and its impact on abortion clinics, namely that they're dropping like flies in states (mostly the red ones) throughout the country.

These laws, writes Marcotte, "single out abortion clinics for medical regulations no other clinics that provide similarly low-risk services need to obey."

They're also proving quite effective, and according to a study by The Guttmacher Institute, the number of TRAP laws being instituted by state governments has more than doubled over the last 14 years, replacing less effective legislative efforts like mandatory ultrasounds and bans on insurance coverage for abortions.

According to Marcotte, there are two types of TRAP laws:

[F]acility requirements and admitting privilege requirements. The former refers to regulations that insist abortion clinics be outfitted with all these medically unnecessary but expensive building requirements. Forcing clinics to meet ambulatory surgical center standards, even if they only do first-trimester abortions that can be done in a one-minute procedure or with a pill, is a popular one.

The other TRAP law sweeping the land is requiring that abortion providers have hospital admitting privileges, even though many hospitals refuse to give them. This regulation has been particularly devastating for rural communities, since there are so few hospitals that are willing to work with these doctors.

Fifty-nine percent of women in the country now live in a state that has a TRAP law designed specifically to reduce their access to safe abortion. These laws are incredibly effective. According to the New York Times, Texas has seen the number of clinics offering abortion drop from 44 to 24 since 2011, just with the hospital admitting privileges law. When the requirement that clinics meet ambulatory surgical standards goes into effect in September, there will only be six left.

This year, Louisiana joined 12 other states in passing a TRAP law, bringing the national total up to 26 states, which according to the Guttmacher report, will impact 59 percent of American women who are of "reproductive age." 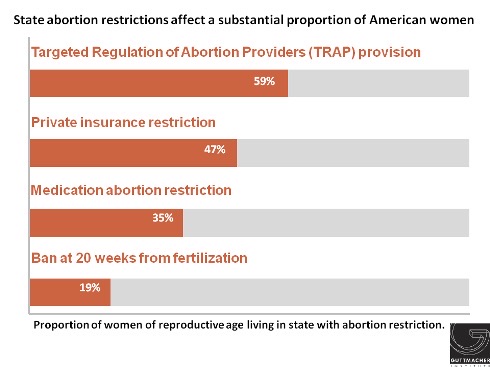 The bill - House Bill 388 by state Rep. Katrina Jackson, D-Monroe - was signed into law by Gov. Bobby Jindal, while he was in a Baptist church in West Monroe June 12.

"I am proud to sign these bills because they will help us continue to protect women and the life of the unborn in our state," said Jindal in a prepared statement after the bill's signing. "These new laws will give women the health and safety protections they deserve and continue to make Louisiana a state that values individual human life."

Yet, that's not the case, despite similar claims by other state lawmakers - Republicans and Democrats alike - that the legislation will go toward protecting the health of women. The American College of Obstetricians and Gynecologists along with the American Medical Association say these TRAP laws have "no medical basis."

Ultimately, what Louisiana's new TRAP law will accomplish is shuttering the doors of the only abortion clinics in New Orleans and Baton Rouge, and one of the two clinics in Shreveport, leaving one lone clinic to handle abortions for the entire state.

And there won't be much help coming from our neighboring states to the east and west, as both Texas and Mississippi also have enacted TRAP restrictions, which since 2011 has resulted in the closure of 19 of Texas's 33 clinics and the looming closure of Mississippi's lone clinic in Jackson.

Legal challenges are already in play in Texas and Mississippi calling the laws "unconstitutional," and a lawsuit challenging Louisiana's new law will likely be forthcoming. All of these cases, however, will be heard by the notoriously conservative Fifth Circuit Court of Appeals, meaning abortion could very well be on its way out in the Deep South.