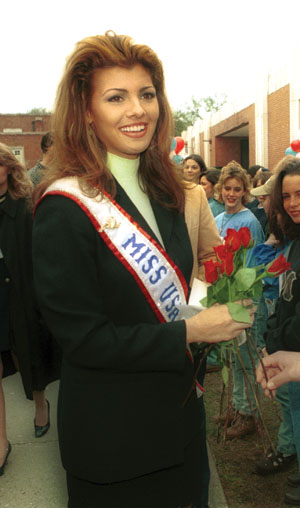 She first captured our attention by winning the Miss USA pageant in 1996, but it wasn’t until Breaux Bridge’s Ali Landry frolicked with some potato chips that she truly entered America’s consciousness. In a now-famous Doritos commercial that aired during the 1998 Super Bowl, a stunning Landry stunned two male onlookers at a laundromat by deftly catching Doritos with her mouth. (A subsequent Landry Doritos ad had the brunette beauty setting off a building’s fire sprinklers.)

Landry, however, has shown she’s much more than a pretty face in the subsequent decade. She parlayed her Doritos fame into appearances on popular television shows such as Felicity, Sunset Beach, Eve and Fear Factor, and has hosted or co-hosted a number of television specials, including the iconic Dick Clark’s Primetime Rockin’ New Year’s Eve.

These days, the 34-year-old Landry is making her move into independent films, starring in the indie flick Bella. The movie’s a co-production with her husband, director Alejandro Gomez Monteverde, and that’s not the couple’s biggest news of late. The pair welcomed their daughter Estela Ines Monteverde into the world last summer, and Landry’s graceful transition into respected working mother recently landed her on the cover of Modern Bride.

Landry still hasn’t forgotten her local roots, which is why she’s reigning over this year’s Krewe of Carnivale en Rio in Lafayette. No word on whether she’ll be throwing Doritos during the parade.