In 27 Dresses’ familiar plot, Katherine Heigl wonders why she hasn’t made it to the altar. Jane dwells in a female sanctuary of baby’s breath and pink tulle. Packed with a bounty of sherbet-colored bridesmaid dresses, her closet looks like something out of Barbie’s dream house.

That overstuffed closet testifies to Jane’s single-minded obsession: weddings. Jane (Katherine Heigl) reads the newspaper wedding section for fun. She even has a favorite wedding moment: when the groom watches the bride walk down the aisle. Her apparent goal in life is to marry, hopefully to her dreamy, “green” entrepreneur boss George (a monotonal, sleepy-eyed Edward Burns). 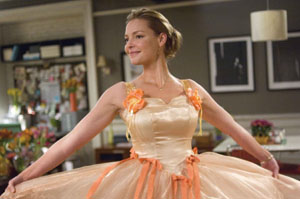 Jane’s suitability for traditional wifeyness is hard to deny. Her greatest joy in life? Making George happy by placing a piping-hot breakfast burrito on his desk in the morning.

27 Dresses is joylessly directed by Anne Fletcher (Step Up) and was written by Aline Brosh McKenna, whose screenplay for The Devil Wears Prada was a real improvement on Lauren Weisberger’s banal novel. But in this chick-flick retread, McKenna has failed to bring that devilish wit and insight into city life.

The weddings Jane organizes and attends are so central to her life that she attracts the notice of cynical, peevish writer Kevin (James Marsden). He writes for the New York Journal wedding section (an obvious reference to the New York Times betrothal page). But he longs to write features and to bust the lid off of the whole wedding “corporate revenue stream.”

Kevin sees the opportunity to break out of his white-cake gulag by profiling Jane’s demented fixation while doing double-duty reporting on Tess’ and George’s approaching nuptials.

Like Amy Adams’ princess in the city from this year’s Enchanted, Jane comes across as a Disney heroine living in a Sex and the City world. Chick flicks are in many ways fairy tales for grown-up women. Instead of evil stepmothers standing in the way of happiness, it’s cynical, wedding-shy boyfriends and crappy urban-dating landscapes that run interference with the heroine’s quest for true love. Enchanted and 27 Dresses even share the same “prince” — James Marsden.

But where Enchanted is frothy and at least moderately knowing, 27 Dresses is painfully conventional and difficult to endure. There’s nothing essentially wrong with a film centered on a woman who longs to move from bridesmaid to bride. The problem comes in films as married to chick-flick bylaws as this one. 27 Dresses is compelled to make Jane look like a desperate basket case for wanting something nearly everyone wants. Male or female, gay or straight, who doesn’t crave love, happiness and companionship? 27 Dresses transforms a common human desire into a pathologically girly one.

It’s part of an entire genre of literature and films engaged in fueling the urban legend that beautiful, affluent, accomplished women like Jane can’t find love. With the dynamic, exceedingly lovely Heigl in the lead, Jane’s lovesickness is an especially preposterous notion. It’s as if the men of the world have grown immune to bee-stung lips, whipped-cream complexions and figures designed to model swimsuits. Like a mean-girl sorority sister who wants to humiliate Jane before she lets her into the girl clubhouse, 27 Dresses must first have its heroine weather a litany of romantic disappointments.

In many ways Jane’s situation — always on the margins of other people’s happiness — is poignant. Other directors have certainly handled the female quest for love with dignity and tenderness. Zoe Cassavetes’ sleeper indie of last year, Broken English, featured another hapless New York singleton (Parker Posey) with a wounded heart. But where Cassavetes and Posey made a woman’s quest for love tragic, screenwriter McKenna and director Fletcher make Jane’s longing for a mate pathetic, a point underlined ad nauseam in Kevin’s disparagement of her bridesmaid “hobby.”

McKenna’s idea of charming banter is to have Kevin call Jane a “crazy lady” and propose she have a drink with him, “to take the edge off.” When he’s not insulting Jane, Kevin is telling her to buck up and stop acting like a human dishrag to the brides whose weddings she arranges. “What about you?” Kevin goads. “You don’t have any needs?”

What a pity. There are few singleton clichés McKenna doesn’t beat with the ugly stick. There’s Jane trying on a succession of old bridesmaid dresses in the kind of fashion-show moment sanctified by Pretty Woman. And the cutesy musical interlude when Jane and Kevin sing Elton John’s “Bennie and the Jets” à la the mass rendition of Dionne Warwick’s “I Say a Little Prayer” in My Best Friend’s Wedding.

Heigl recently told Vanity Fair she had some misgivings about her role as the pregnant career woman in Knocked Up, saying that Judd Apatow’s film “paints the women as shrews, as humorless and uptight.”

Viewers may be left scratching their heads on how she justifies 27 Dresses. As tacky as any of those frilled and unflattering dresses, this unappealing little number continues the unfortunate tradition of making single women the laughingstock of American cinema.