Lisa Hargis Smith lived a mysterious life as seen with her death earlier this month and its impact on the community of those who knew her, whether as a star student in Lafayette High's class of 69, or later as a woman struggling with homelessness and mental illness. 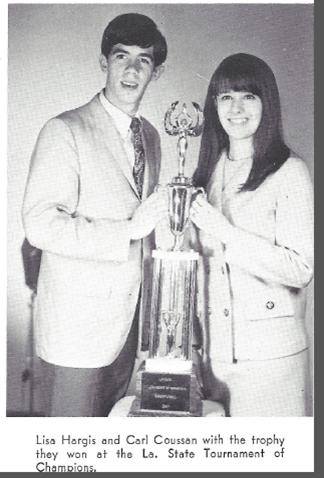 Lisa Hargis Smith lived a mysterious life as seen with her death earlier this month and its impact on the community of those who knew her, whether as a star student in Lafayette High's class of 69, or later as a woman struggling with homelessness and mental illness.

Smith died earlier this month of natural causes. She was found inside A Gift Horse on Jefferson Street, and in early media reports was described as a local homeless woman who sometimes worked for the antique shop. Occasionally she would sleep there and use the computer as well.

Shortly after her death made headlines, a Facebook post from Carl Coussan added another dimension to the story of Smith's life:

The Advertiser headline read last week that a homeless woman was found dead in a local antiques store. The brief article identified her as Lisa Smith, and was probably little noticed when it ran. She was better known to me, and others who attended Lafayette High in the late Sixties, as Lisa Hargis. She was my debate colleague, a brilliant and beautiful girl with all the promise and potential one could imagine. I don't know the whole story of how she went from that to intractable mental illness, life on the street and a lonely death. But I mourn her and our youth and things that might have been. I will remember her as she was in this photograph.

Within 24 hours, Coussan's post had sparked a flurry of responses, with 294 likes and 68 comments, including a number of others who remembered Hargis both from the past and now.

The outpouring of memories prompted First Presbyterian Church, where Hargis often volunteered, to organize a memorial service and fundraiser to cover the costs of her death.

And her life is examined in even more detail in this article in Friday's Daily Advertiser, which attempts to trace her road from high school co-valedictorian to her later troubles - she was often haunted by elaborate conspiracy theories of politicians watching and following her.

The article is definitely worth a read, but one issue it leaves out is the overwhelming correlation between homelessness and mental illness, and the lack of a support network for those suffering from both - a tragic combination that makes up the majority of those considered chronically homeless.

According to NAMI.org, about one-third of America's homeless population is mentally ill, and those suffering with mental illness are much more likely to remain so as a result.

For an interesting behind-the-scenes look at homelessness in Lafayette, check out Dege Legg's June 2007 article "Slipping Through the Cracks" here.