How the U.S. has gotten itself into another fine mess

Recessions are a normal part of the U.S. business cycle. Our economy has experienced eight of them since WWII, as they occur roughly every seven years or so. Knowing that recessions are cyclical and recurring is fine, but it doesn't lessen the financial sting that often accompanies them. As you can see from the accompanying chart, when they do hit they can be really rough on stocks.

Because they are cyclical and occur with some frequency, the Federal Reserve has developed fairly sophisticated tools with which to implement monetary policy needed to come to the rescue. One of the biggest tools in the Federal Reserve's toolbox has simply been adjusting the level of short-term interest rates that affect all bank and private lending.

When the last recession started in late 2007, short-term interest rates were roughly 5 percent, but by the fall of 2008, the Fed succeeded in lowering them to effectively 0 percent. The policy was successful in abating the free-falling implosion of the economy.

But if you look carefully at the accompanying long-term chart of interest rates (dating back to 1950 through today), this time you may notice something curiously different.

After the prior seven recessions ended, the Fed was able to normalize and somewhat revert interest rates toward pre-recession levels. That's reflective of a healthy economic recovery. But, five years into this recovery, the Fed has thus far been unwilling to lift short-term interest rates from 0 percent (one of those things that make you go hmmm).

There are a number of reasons for this, many of which revolve around the sluggish nature of this particular recovery. But our new level of national debt - now north of $17 trillion dollars and growing - also has an influence on Fed policy decisions. If the Fed were to 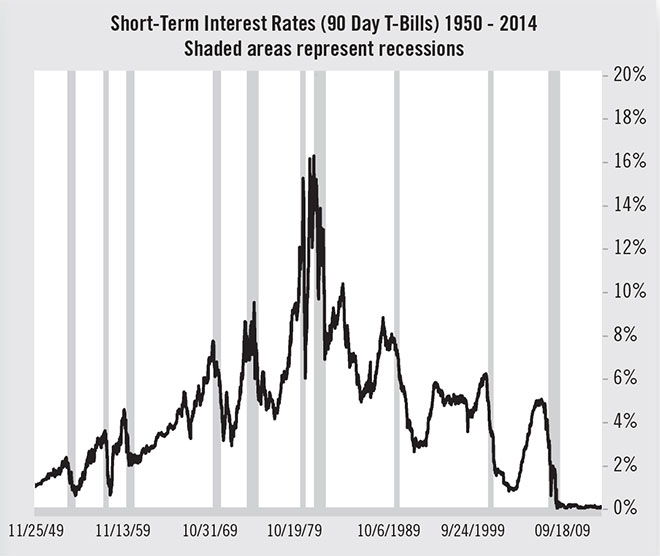 normalize the level of interest rates so that they were back to where that stood say in 2007, the interest expense on that debt for our country would approach $1 trillion dollars per year. Oops.

So low interest rates may well be here for a while, much to the chagrin of savers. And when the next recession hits, unless the Fed can reload on its interest rate policy, that chagrin might well carry over to stock investors as well. Should be interesting.