An arrest was announced this morning in connection with last week's bomb scare at UL Lafayette.

At a multi-agency news conference held this morning [Tuesday] at the Lafayette Police Department, officials with the FBI and local law enforcement named 30-year-old Devin Haywood as their prime suspect in connection with last Wednesday's bomb scare, which shut down UL's campus and the surrounding area for much of the day. 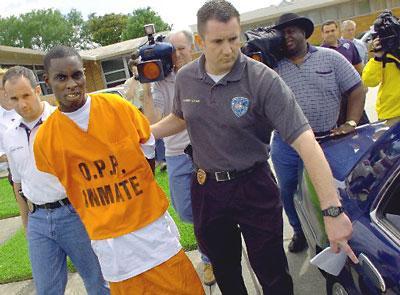 This 2005 photograph from Michael DeMocker of the Times-Picayune shows Devin Haywood being transported by the Jefferson Parish Sheriff's Office following his arrest for an alleged armed robbery.

According to this report from the Advocate, Haywood is also suspected of attempting an "early bird robbery" of MidSouth Bank's Moss Street branch - meaning he attempted the robbery prior to the bank's opening as employees were arriving for work. The robbery attempt came shortly after he allegedly phoned in the 5:30 a.m. bomb threat to KATC.

Haywood's arrest, according to Don Bostic, supervisory senior resident agent for the FBI, resulted from witness interviews and physical evidence, and more arrests could be forthcoming.

Though Haywood is a Lafayette resident, he's not enrolled at the university, and it's unclear whether he has any previous connection with the school.

A report from the Times-Picayune shows Tuesday's arrest may not be Haywood's first. According to the report, Haywood - considering it's the same Devin Haywood - was arrested in June 2005 for an armed robbery of an Iberia Bank in Gretna in which he allegedly shot a bank teller. The IND is awaiting word to determine whether the same Devin Haywood was involved in both incidents.

Haywood also appeared Tuesday for an arraignment hearing before U.S. Magistrate Judge Patrick Hanna, according to a press release issued by U.S. Attorney Stephanie Finley's office. He was charged in a federal criminal complaint with one count of attempted bank robbery and one count of using a facility in interstate commerce to willfully make a threat or maliciously convey false information.

Haywood, if convicted on both counts, could face a combined sentence of up to 30 years in prison with eight years of supervised probation, as well as fines of up to $500,000.