If anyone stands to gain from Louisiana's power-drain in D.C., it may be U.S. Rep. Charlie Melancon, the mild-mannered Cajun who went from rookie to old-hand practically overnight. 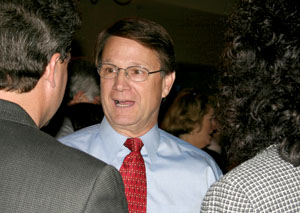 When he wasn’t working on a series of federal recovery grants last week, U.S. Rep. Charlie Melancon was making sure all of his princesses received their gifts. Between making his daily calls to the Democratic Party leadership, he also handled requests for ball tickets and hosted a breakfast for Beltway royalty. Even though Fat Tuesday was still a coconut’s throw away, Melancon was knee deep in the pageantry and pomp of Carnival. The annual Mardi Gras ball hosted by the Mystick Krewe of Louisianians (also known as the state’s congressional delegation) is one of the hottest events in D.C., drawing an ever-increasing contingency from the Bayou State.

Melancon, this year’s ball chairman, was taking every meeting he could last week. After all, the Democratic congressman would have had to actually travel back home to Napoleonville to find as many Louisianians in one place. Even Gov. Bobby Jindal, a Republican, was seeking a sit-down with Melancon and the rest of the delegation. It was an unusually busy few days, but Melancon was enjoying himself. “I’m lucky my wife doesn’t mind helping out with this,” he says with a laugh during a 30-minute break from the mayhem.

The organized bedlam of this year’s festivities was par for the course, but Melancon says there was something distinctly different this go-around. Citizens and advocacy groups, many from other districts, were approaching him for help on a variety of issues. It wasn’t because he was chairman of the ball, albeit an enviable position. It was due to the fact that Melancon, in many ways, has become the last man standing — or at least among the last.

In the Senate, David Vitter, a Metairie Republican, is still reeling from being linked to a prostitution ring, and Mary Landrieu, a New Orleans Democrat, will soon be under fire, as she is every election year. The situation’s much more dire in the House of Representatives. Now that he’s governor, Jindal’s seat is vacant. Two other Republicans — Jim McCrery of Shreveport and Richard Baker of Baton Rouge — also recently announced that they’re stepping down. Meanwhile, Democrat Bill Jefferson of New Orleans is still facing corruption charges, and his future is as shady as ever. All of this makes for a power-drain like Louisiana has never before seen.

But Melancon seems to have a clean slate that’s worth building on. He was heavily urged to run for governor last year, an offer he declined after little contemplation, and he now says he’s being encouraged to run against Vitter in 2010, although the Democratic Senatorial Campaign Committee isn’t technically knocking at his door yet. “For right now, I’m the congressman in the 3rd District,” Melancon says. “I feel like I started a job following hurricanes Katrina and Rita, and I want to finish that job.”

Joshua Stockley, former president of the Louisiana Political Science Association and professor of government at Nicholls State University, says it’s only a matter of time until the DSCC does come knocking. With Kathleen Blanco on the mend after a tumultuous term as governor and “Bob Odom’s kingdom as agriculture commissioner” officially over, Stockley says Melancon is becoming the go-to Democrat when major Louisiana offices open up. “There’s also another scenario to watch,” he adds. “If Louisiana voters decide to boot Mary Landrieu this fall, then Charlie Melancon will become the man you need to know, the top Democrat. Also, more windows of opportunity will open up for him if the Democrats maintain control of the House and a Democrat ends up in the White House.”

While he didn’t directly dispute that the cards could potentially fall in such a way for Melancon, Roger Villere, chairman of the Louisiana Republican Party, is confident that a Republican will take the White House. If that does happen, he says Reps. Charles Boustany of Lafayette and Rodney Alexander of Quitman would stand to gain political ground, not Melancon. “For starters, Congressman Jefferson has more seniority than [Melancon] right now,” Villere says. “I think everyone in the delegation has learned to depend on each other and work together, and I don’t see any one person becoming ‘The Man’ anytime soon. We don’t really know the dynamics of this situation, either. These are unusual circumstances, and Louisiana has never seen turnover like this before.”

To some degree, Melancon’s good fortune is based on excellent timing, a bit of luck and other people’s misfortune. Furthermore, he has yet to hook up on any headline-grabbing policy issues or land serious committee assignments. If anything, it’s Melancon’s political prowess that deserves credit. While lawmakers with twice his years in office have yet to lead a congressional leadership team on a tour through their districts, Melancon has done so twice since Katrina’s landfall — and he formed solid coalitions in the process. He has also befriended Democratic House Speaker Nancy Pelosi of California without angering his conservative base in south Louisiana.

Maybe that’s because Melancon has molded himself as a Blue Dog Democrat that preaches pay-as-you-go financing and stays to the right on social issues. If you ask him directly, he’ll tell you as much and then paint a picture of America as a centrist country that demands its two mainline parties work together. That strategy seems to be the key to his success — so far. The way Melancon tells it, this acquisition of new power isn’t something that was premeditated, or necessarily wanted. “If I’m the go-to guy for a while, then so be it,” he says. “But honestly, I wish we weren’t losing Jim McCrery and Richard Baker and everyone else. And when it’s my time to go, I’ll just go, too. If I don’t do it on my own, at least my wife will have the common sense to push me in the right direction.”