A Lafayette native hopes to take westward bound oilfield personnel off the road and into the air ' and he wants a promise to upgrade the airport's nearby terminal facilities. 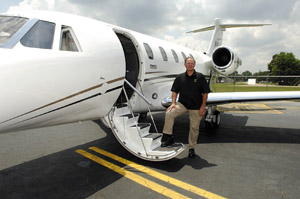 Oilfield execs and employees worn out by the dreaded drive from Lafayette to Houston may be in for some relief ' a shuttle flight to the airport in Sugar Land, Texas, home to numerous international oilfield companies and about 20 miles to downtown Houston.

The price would be $350 round trip, less than half the walkup price for a Continental flight to Houston.

Oil executive Keith Mosing of Frank's International in Houston says local demand has to make the project feasible, which is why Mosing is awaiting a market analysis from the Lafayette Airport Commission. Mosing also wants a firm commitment from the airport that an adjacent facility with a hangar big enough to hold the business jet ' and nice enough to adequately accommodate arriving passengers and those awaiting departure ' will be available soon.

The Lafayette native has lived in Houston since the early 1970s, but his family's company, 68-year-old Frank's Casing Crew & Rental Tools, is headquartered here. Mosing is concerned that his hometown may lose more businesses to other cities if the adjacent terminal facilities ' commonly called fixed base operations ' at the airport are not upgraded. "We're trying to stimulate the economy and keep service companies, keep all businesses, in Lafayette," says Mosing, who believes affordable air shuttle service to Houston is an important element in business retention and expansion.

Like Mosing, some local business leaders have long argued that the existing facilities are not representative of what this community has to offer ' and that they often leave a bad first impression on dignitaries and others coming to the city. Mosing believes the recent hurricanes have opened new doors for Lafayette businesses and says it's critical that the community put its best foot forward to take advantage of those prospects. "Lafayette has a window of opportunity to move ahead," he says.

The Lafayette airport leases land to two fixed base operators. An FBO is often a private facility (though it can be a department of the municipality an airport serves) with hangars and a mini-terminal ' including a small waiting/lounge area, meeting rooms and offices. The lobby area typically seats 20 to 40 people. FBOs provide a variety of services and fuel to the general aviation population and refuel commercial and military aircraft on a contractual basis.

Paul Fournet Air Service and Lafayette Aero, the airport's two FBOs, are aging facilities in desperate need of upgrades, according to Lafayette Airport Commission Chairman Jim Nunn. Both leases expire at the end of 2007; the controversial issue of their renewals is on the agenda for the airport commission's June 1 meeting.

Western Airways already has a 30-passenger Dornier twin-engine business jet at Lafayette Aero to fly oilfield crews to Mexico on Mondays and Fridays; that's the jet Mosing would utilize to launch the local service. (He made one flight from Lafayette to Houston with 28 passengers during the recent Offshore Technology Conference.) Lafayette Aero's hangar, however, is too small for Western's Dornier, so the jet has to sit out on the tarmac. (Frank's Casing Crew has a small private hangar at the Lafayette Regional Airport, which houses a plane used to fly its employees and customers to and from Houston and other destinations.)

Nunn is a major advocate of Mosing's plan and would like to see the shuttle service up and running as soon as possible. The airport commission chairman says the need is urgent because of the major I-10 construction projects under way. "It's a horrible drive," he says.

Nunn also is pressing the FBO upgrade issue. A franchisee for FBO operator Million Air of Houston has put down a $2,500 deposit with the Lafayette airport in hopes of constructing a new facility here or overhauling an existing one, and Nunn is meeting with the company this week. "They have not been awarded a contract," he says. "After our [June 1] meeting, the status of the FBOs will be somewhat in sharper focus."

Mosing and Nunn recently toured a new multi-million-dollar municipal FBO at the Sugar Land airport, the kind of project both would like to see for Lafayette. Mosing, however, understands the venture will take time.

"I'm willing to work with everybody, but I think the people of Lafayette deserve a first-class airport and first-class facilities. People, for half the price [of a typical airline ticket to Houston] will walk on a hot tarmac, but you can't do that forever," Mosing says. He says for some professionals, such an arrangement is just not an option, no matter the price. "If you're a paying client wearing a business suit, you want a nice [facility]."

Mosing says tentative plans call for starting the shuttle service a few days a week and adding flights as demand grows. His company will be securing blocks of pre-sold tickets but will also be taking online roundtrip reservations.

To help expedite the project, Nunn is making direct contact with oil companies and is analyzing data from a Greater Lafayette Chamber of Commerce survey launched early this year to determine the community's needs for air service. "Every oilfield company I speak with says they'd use it for four to six people each week. There is a huge demand," he says. Nunn believes the bulk of the demand will come from Lafayette service companies doing business in the Houston area, as well as from Houston companies sending employees here. "They may write the purchase order in Houston, but we fabricate it in Lafayette," he says.