Cloverfield is thrilling, but proceed with caution if you’re prone to motion sickness. A nasty beast kicks the daylights out of Manhattan in Cloverfield, an exciting take on the tired monster-movie genre. After many months of prerelease hype and viral marketing, what arrives is worth the commotion: a scary disaster movie whose effect is often distressingly real — so real that some folks in the theater seemed ready to vomit. 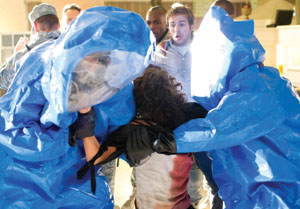 Rob (Michael Stahl-David) is at the center of the chaos when a monster attacks Manhattan in Cloverfield.

The premise: A tape has been found in Central Park after an unexplained disaster, and our task is to sit back and watch it. It begins with playful couple Rob and Lily (Michael Stahl-David and Jessica Lucas) as they speak to one another after a night of apparent unabashed sexuality.

The video spends a little more time with them, but then we skip ahead to Rob’s going-away party (he’s leaving for Japan); he and Lily are no longer together. After a few minutes of character development, there’s a big tremor, then another, then a nasty roar, and then explosions and beheaded national monuments. The film never lets up from there, and it possesses a high freak-out factor. We only see whatever is attacking the city in brief, partial glimpses.

Cloverfield is a shaky, shaky movie. It’s filmed with handheld cameras and seen mostly through the perspective of Hud (T.J. Miller), somebody who isn’t used to using a video camera. Hud doesn’t always hold the camera to his head; sometimes, it is at his side as he runs like hell to safety, or is dropped on the ground when he’s knocked off his feet. The effect can be disorienting.

I saw many people get up and leave during Cloverfield. Every 30 seconds or so, somebody would woozily walk down the steps toward the entrance. Sometimes they came back, and sometimes they were never seen again.

Director Matt Reeves and producer J.J. Abrams (the man responsible for Lost and all of its mystery and self-contained mythology) reveal nothing obvious about the monster’s origins. This makes perfect sense, because the group the viewer is running with knows nothing other than the fact that something big is making mayhem. It’s reptilian in nature, and it sheds spider-like parasites that do very horrible things to people. With only brief glimpses at television sets and quick chats with military men, the group remains uninformed as to what is attacking them — as do we.

The relative unknowns in the cast deserve credit for acting as if they aren’t acting, and doing it well. Their dialogue and reactions seem very spontaneous, and nobody behaves as if they are “faking” a reality scenario with scripted lines (something that marred Brian De Palma’s lame Iraq war drama, Redacted). The special effects, including the destruction of the Brooklyn Bridge, seamlessly blend in to the handheld-video format. The monster’s swishing tale and clawed feet look real.

As for the monster, you do eventually get a long glimpse of it at a story juncture that I will not reveal. I’ll just say the monster is an ugly creature, and I wouldn’t want it in my city.

I had a great time at this one; you’ll hear some folks liken it to a scary amusement-park ride, and I belong in that party. I get sick on the Disneyland tea-cup ride, but the movie didn’t make me dizzy. Still, I’ve heard more reports of people physically ill from this movie than I did for Woody Allen’s handheld opus, Husbands and Wives. My advice: Give yourself some distance from the screen.