Whisper campaigns, eligibility questions, voter alliances - welcome to the behind-the-scenes drama of the competition for the first Cajun/zydeco Grammy Award. 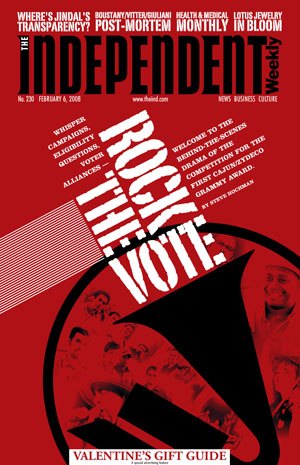 The first-ever Grammy Award for best Cajun/zydeco album brought out quite the field of nominees — not just the standard five, but thanks to a three-way tie for the last slot, a lucky seven: Terrance Simien, Geno Delafose, the Pine Leaf Boys, the Racines, Roddie Romero and the Hub City All-Stars, the Lost Bayou Ramblers — and Jethro Tull.

Well, at least that’s how some people see it, evoking the infamous incident when in 1989 the first-ever heavy metal/hard rock Grammy went not to the expected winner, Metallica, but to the veteran English classic/prog-rock band named after a 17th century agriculturist. In this case, the part of Tull is being played by Lisa Haley, a Los Angeles-based fiddler who is not only the sole non-Louisianan in the mix, but also the act who has moved farthest away from traditional sounds; her King Cake album showcases her upbeat mix of Americana, R&B and pop with Creole zydeco touches.

Welcome to the world of the Grammys!

Anyone who’s followed the elite music awards show, marking its 50th year with the 2008 show Feb. 10 at the Staples Center in downtown Los Angeles, knows that a little controversy comes with the territory. And traditionally, having at least one act that raises questions about the criteria and process nominated in a new category is almost a rite of passage. Not only was there the Tull incident, arguably the standard for Grammy debacles in many people’s minds, but Public Enemy lost the first rap Grammy in 1988 to D.J. Jazzy Jeff and the Fresh Prince (the nominee with the most pop and least cred). Those events and the recent introductions of Hawaiian and Native American honors raise a number of issues that are rearing their heads again with the Cajun/zydeco award. The definition of just what is or what isn’t eligible has caused a lot of raised eyebrows and some raised tempers.

Does the music have to be made in Louisiana to be true Cajun or zydeco? Does it even have to be made by Cajuns and Creoles? Does it have to be sung in French? Does it need certain instrumentation (notably accordions) to qualify? Or a predominance of traditional waltzes and two-steps?

Cynthia Simien, wife of zydeco veteran Terrance and the person most responsible for the six-year campaign to convince the Grammy-sponsoring National Academy of Recording Arts & Sciences that the music merited a dedicated award, had hoped to avoid these kinds of disputes. But she’s been around the Grammys, not to mention around Cajuns and Creoles, long enough to know that wasn’t realistic.

“These genres were born in Louisiana, born of the Creoles and the Acadians; they are their cultural traditions — period,” says Cynthia Simien. “But the fact of the matter is, it’s really hard to define a geography when talking about music. We use that to educate and illustrate how these music genres were critical to the cultural identity of the state. But it is not a criteria of the Grammy Awards process to restrict it to a geographical region.”

The case could be made that simply sticking the two genres together in one category was asking for trouble on its own.

“I’ve heard from some people that they shouldn’t have folded these two things together,” says Reid Wick, the New Orleans-based senior membership coordinator for the Recording Academy’s Memphis Chapter, which covers Louisiana. “Others have wondered where swamp pop fits in, since it’s the same geographic region. And divisions down black and white lines were more prevalent than I expected. There are some people who consider one to be highbrow and the other lowbrow.”

So as far as the Grammys are concerned, Creole zydeco greats Simien and Delafose, Cajun neo-traditionalists the Pine Leaf Boys, Racines and Lost Bayou Ramblers along with Haley and rootsy songwriter Romero — each of which are some of both or none of either, depending on who you ask — are all competing together. To some extent it’s as if they put Diana Ross and Iggy Pop competing in a “Detroit” category, but arguably it’s better than having to go head-to-head with Bruce Springsteen, which is what happened to Cajun mainstay Ann Savoy last year (albeit with her Adieu False Heart duet project with Linda Ronstadt, an album that wasn’t even folk, let alone Cajun, in the first place). Needless to say, Springsteen’s tribute to the music of Pete Seeger, We Shall Overcome — The Seeger Sessions, was the winner.

Only three zydeco acts have won Grammys (Queen Ida in 1982, Clifton Chenier in 1983 and Rockin’ Sidney in 1985, thanks to his novelty mega-hit “My Toot Toot,” drum machines and all) and just one Cajun (BeauSoleil in 1997) in the event’s 49 years. Even nominations have been pretty scarce, with the music generally having been put in the traditional folk category, where competition has included such big names as Bob Dylan, Emmylou Harris and the Boss.

And without cobbling together the Louisiana duet, that’s how it would have to stay. “At this point, neither [Cajun nor zydeco] would have been able to survive on its own,” Wick says.

Shotgun marriage and all, it’s fine with Chris Courville of the Lost Bayou Ramblers. “It’s an award given to Louisiana and our culture and music,” he says. “The fact that there is a category, hopefully, encourages more people at least in the popular realm to pay more attention.”

Michael Doucet, the fiddler who fronts BeauSoleil, believes that his band’s Grammy win helped boost awareness of the music — though the group received even more exposure from performing on the widely viewed Grammy Awards telecast in 1991 with Mary Chapin Carpenter, whose “Down at the Twist & Shout” not only featured the band but mentioned it by name in the lyrics.

“Back in the ’80s people didn’t really know what Cajun was,” he says. “For us, the nominations brought a boost, at least an acknowledgment of our music that we were legitimate folk music.”

How much it can help a winner or nominee is uncertain. Ben Sandmel, drummer and manager of the Hackberry Ramblers, says the band’s 1998 nomination for the Deep Water album of old-style Cajun dancehall swing was one of the highlights of his life with the group that, other than him, consisted of senior citizens who had been playing together for decades. The band went to New York City for the ceremony and parties and even appeared on an MTV show performing alongside teen brother band Hanson.

“It was a thrill of a lifetime,” Sandmel says. “And it was a real adventure to take those guys up to New York.”

But what did it do for the band’s career?

“When we got nominated,” he says, “our distributor ordered 200 copies of the album — for the whole country.”

Even for a tiny label operated out of Sandmel’s New Orleans home, that was barely a blip. With the marketing muscle of a bigger operation behind them, the Ramblers might have been able to make more of it in terms of album sales and concert bookings, but the benefit of a nomination or even win in what is really a specialty category (and one that will not get exposure on the Feb. 10 CBS telecast, but will be awarded in a non-broadcast pre-ceremony) is not something to be counted on. That said, Courville notes that the day the nominations were announced, bookers from a couple of festivals called to offer not only congratulations, but spots on upcoming bills. But getting attention outside of certain circles is hardly a certainty.

“There are so many categories now, so I don’t know,” Doucet says, adding, “I hope it doesn’t lose as much as gain.”

“As far as being nominated, we feel we’ve already won,” says Courville, echoing the old saw.

But there are some fears, as Doucet intimates, that the intramural competition, as opposed to being part of a larger folk world, could have some negative fallout.

“When they make a timeline, this could really mark the change of Cajun and zydeco music,” says a portentous Wilson Savoy, co-leader of the Pine Leaf Boys. “This year’s outcome will really impact how people here think about [the Grammy]. If it’s one they’re upset about, a lot of people say they won’t support it or participate in the future. If they like the outcome, everyone will be behind it and people will be interested in recording in hopes of being nominated. But the bad thing will be if it could become more Americanized so that people will vote for it. They might put an emphasis on high-quality recordings with great engineers rather than hardcore Cajun music, and worst of all, if people start singing mainly in English. They might say, ‘This song tells a great story, but I want people in California to understand what I’m singing.’”

And that brings us back to Jethro, er, Lisa Haley. The musician, who played in Queen Ida’s band and refers to Creole musician Joe Simien as her “adoptive father,” defends her place among the nominees forcefully, saying she represents the very global reach of southwestern Louisiana music that was required by Grammy officials in the process of granting the category. But those same comments have ruffled feathers, as they come off as her believing the Louisiana musicians are killing the sounds with provincialism.

“It’s not going to be someone playing traditional styles who will reach the world,” she says. “It’s going to be people playing it in a modern style. I still play the old style. I do a part of the show with the old tunes. And people go, ‘Okay, now play the new stuff.’”

Haley has also campaigned aggressively with postcard and e-mail reach-outs — officially a Grammy no-no, but one that has become more and more common in recent years. Her contacts within the music business, via a lot of studio work (producers and engineers are voting members) and seeming ubiquity at Hollywood parties bearing any sort of Louisiana theme, could give her an edge, while the other six split the votes within the Louisiana music aficionado community. Not to mention that Louisiana is not exactly a Recording Academy powerhouse in terms of membership — just 150 Louisiana residents are voting members, despite valiant efforts by Wick, Simien and others to raise awareness of the value of participation. (All members vote in the “Top 4” categories — best album, best song, best record and new artist — and then choose eight other realms, such as folk and country, so the vote total for this particular category could be low and a few either way could make a huge difference.)

The issues some take with Haley go beyond geography to philosophy. The very fact that she represents a move away from the cultural traditions — even as most of the other nominated acts incorporate less conventionally traditional elements themselves, if nowhere near the degree she has.

“Not so many people would mind if it wasn’t someone from Louisiana,” Courville observes. “It’s her in particular and association with comments she’s made. Though honestly, people would complain if it was someone from only as far away as Shreveport.”

Steve Hochman is a longtime contributor to The Los Angeles Times, and his work has also appeared in Rolling Stone and Entertainment Weekly. This story originally appeared in New Orleans’ OffBeat magazine.