Few understand the role of a hospitalist - the doc who's always there when you need him - but it's a growing health care trend that's here to stay.

Imagine you are admitted to the emergency room in a strange town, where you are first seen by a doctor whom you’ve never met. Alone and scared, you’re then admitted into the hospital and sent to a room, where you wait and wait for your primary care physician to arrive. When darkness falls, he finally shows up to make his rounds, hurried and exhausted. Anxious to go home, you ask, “When can I get out of this place?” Your physician responds, “Maybe in the morning. I’ll have to let you know after tomorrow’s rounds.” 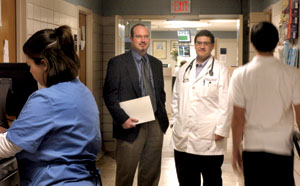 Then, picture a different scenario. In this vignette, a friendly face greets you at the emergency room and says, “I’ll be taking care of you for your entire hospital stay, as long as you are here.” He checks on you morning, noon and night. That evening, he informs you, “Everything checks out fine. You’re free to go.”

What’s the difference between these two situations? In the second one, the patient is being treated by a growing breed of doctors called hospitalists. Hospitalists are unlike primary care physicians, whose duties involve treating patients both at their offices as well as in the hospital. “We are doctors that take care of patients in the hospital,” explains Dr. Robert Carroll, a hospitalist at Lafayette General Medical Center. “But also, we help work on making the processes of the hospital a little more efficient and also take care of patients that don’t have a doctor who comes to the hospital.”

The movement toward physicians who manage patients only in the hospital began in the 1990s on the West Coast. In 1996, Dr. Robert M. Wachter coined the term “hospitalist” in a New England Journal of Medicine article. Today, hospital medicine is the fastest-growing medical specialty in the country, projected to grow from 20,000 to 30,000 by the end of the decade.

A recent study in the NEJM shows that patients treated by hospitalists have approximately a half day shorter stay than those treated by their primary care physicians. That’s one of the reasons LGMC decided to start its program in 2005. “The primary reasons we began a hospitalist program was for improved physician and patient satisfaction, as well as our ability to decrease our average length of stay for a patient in the facility, thus reducing the patient cost for that patient’s stay,” explains Patrick Gandy, interim chief executive officer and chief operating officer of LGMC.

Our Lady of Lourdes Regional Medical Center began its program in 1994. Currently, the group has two full-time hospitalists and a part-timer, all of whom still keep an office practice. However, Lourdes spokesman Berch Stelly says the hospital is finalizing the details of a new model that will provide “much more coverage,” but he was not ready to disclose those plans at this time.

Lourdes launched its program after observing that many physicians wanted to focus on the patients in their offices, rather than in the hospital, while other docs were looking to simplify their lives by concentrating on hospitalized patients, instead of a demanding office practice. “From a lifestyle perspective, a number of doctors are looking more and more toward shifting their practice patterns to working with hospitalists,” says Paul Molbert, director of medical staff services and physician partnerships at Lourdes. “And that is where the lifestyle setting works well both for the hospitalist as well as the physician in his private practice, because there is a true separation. However, the continuity of care is preserved.”

Currently, LGMC has three hospitalists and a physician’s assistant and plans to add a fourth physician to its program. Women’s and Children’s Hospital is also in the process of expanding its obstetrics/gynecology and pediatrics hospitalist programs. Southwest Medical Center and The Heart Hospital of Lafayette contract with The Schumacher Group for their hospitalists.

Hospitalists are usually assigned to patients in two ways. First, “unassigned” patients — that is, patients who do not have a primary care physician — are admitted to the emergency room, then followed by a hospitalist for the remainder of their hospital stay. Second, doctors, particularly in outlying areas, refer their patients to hospitalists for more thorough treatment. “Lafayette is a community that draws patients from a lot of different areas,” Carroll explains. “And sometimes, it’s because we have specialists or some of the technology that some of the smaller, outlying areas don’t have.”

After admission, the hospitalist treats the patient much like a primary care physician, doing workups, consulting specialists when necessary, administering treatment, and making rounds. Because the hospitalist is on-site, patients don’t have to wait for their treating doctors to show up after office hours. “If we see a patient in the morning and that patient just needs one or two things to happen during the day, then maybe, in the evening, he can go home,” Carroll explains. “It allows the hospital to have an empty bed for another sick patient, and it allows that patient to go home. And, it also allows the insurance company to save some money in the hospital by ending the care when it needed to be ended.”

While hospitalists are usually trained in internal or family medicine, these doctors are becoming increasingly specialized. At Women’s and Children’s Hospital, ob/gyn hospitalist Dr. Rex Hubbard says he spends a lot of time “putting out fires.” Since starting his new position in June, he has done everything from assisting with C-sections and other gynecologic surgeries to making rounds in the hospital. “When people drop into the emergency room and need gynecologic care, the physician doesn’t have time to leave his office and run over to take care of a patient — a lot times, a patient that he does not even know — in the emergency room,” he says. “So, we are kind of physicians who are at the hospital full-time and put out fires.”

For some physicians, choosing to be a hospitalist is about making a lifestyle change. Hubbard practiced as an OB/GYN for 22 years before making the switch. When he moved from Tennessee to Shreveport to be closer to his twin brother, he stumbled upon the hospitalist opening at Women’s and Children’s. Now, he commutes from Shreveport to work with two other former OB/GYNs who are now hospitalists at Women’s and Children’s. “All three of us have seen and done everything as far as obstetrics and gynecology is concerned,” Hubbard says. “But, the three of us have done that for so many years that, at this stage in our lives, being a hospitalist affords us the ability to stay in touch with medicine in a program that is necessary but doesn’t have the same demands.”

For others, becoming a hospitalist was always in the cards. Dr. David Grace went straight from his residency at UMC to working as a hospitalist at IPC in Phoenix, Ariz. “With them, I sort of learned the ins and outs of being a hospitalist,” he says. “So, I learned the tricks of the trade and the business end of hospitalist medicine, and I brought that back to Lafayette.”

In 2005, Grace moved back to Lafayette, where he established the hospitalist program at LGMC. He then joined The Schumacher Group in 2006, setting up a contract program to supply hospitalists at several facilities, including Southwest Medical Center and Dauterive Hospital in New Iberia. Since his residency days at UMC, Carroll also had his sights set on being a hospitalist. Trained in internal medicine, he went into private practice for a while, then joined LGMC’s hospitalist unit in March of 2005. “When I graduated from residency at University Medical Center here in 2002, I actually had it in my mind that I was going to become a hospitalist,” he recalls. “And it is something that, as a resident, kind of fit what I wanted to do — take care of acutely ill patients and see them through their hospital stay. There was something telling me that this was really something that I was meant to do.”

Feedback from doctors and patients about hospitalist programs has been positive. “It’s a win-win situation for patients who don’t have to wait around for a doctor to finish at his office and come over to see them,” says Women’s and Children’s Hubbard, “and for us, because we have the aspects of dealing with the patients, and dealing with their emergencies, without having to accept 24-hour, 365-day-a-year responsibility for patients.”