In his latest attempt at epic movie-making, director Paul Thomas Anderson puts the bulk of the task on Daniel Day-Lewis' shoulders. 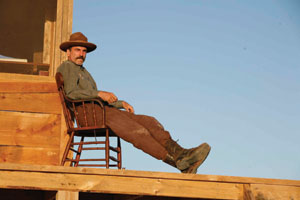 Daniel Day-Lewis, one of the most physically gifted actors of his generation, plays a driven, obsessive miner in There Will Be Blood.

Director Paul Thomas Anderson seems to have spent the majority of his career reaching for an epic, a masterpiece. You’d think from the barrage of reviews that scream from the commercials for There Will Be Blood that he’s accomplished his goal. Everything about the movie suggests “epic”: a top-flight lead actor, Daniel Day-Lewis; a sometimes-majestic, sometimes-darkened cinematography; prestigious source material, Upton Sinclair’s 1927 novel Oil!; and a heavy-handed soundtrack.

And yes, there is much to like about There Will Be Blood, as there always is in movies with such a sweep. Anderson is nothing if not passionate about his stories, and emotion is spilled more than blood here. But as the film wears on, you can practically hear its creaking and groaning efforts at greatness, something Anderson has become known for. When it comes in the light ironic wit of Boogie Nights, maybe it’s not too apparent. When it’s smothered in the pretentiousness of Magnolia, it’s inescapable.

Anderson’s always searching for a little soul in life, and continues that search in Daniel Plainview (Day-Lewis), a single-parent miner who strikes oil and spends the rest of his life seeking and crushing opponents real and imagined. So we should be grateful that, unlike Magnolia, Anderson doesn’t spread his nearly three-hour drama about capitalism, Christianity and corruption around a mish-mash of sub-plots. The bad news is that he hoists the burden of the movie on the broad shoulders of Day-Lewis, who, despite being one of the most physically gifted actors of his generation, still can call too much attention to himself on screen. Is Daniel Plainview really that far removed from Gangs of New York’s Bill “The Butcher” Cutting in its broadness? They are both larger-than-life, mustachioed Machiavellians done in by pride and singularity of purpose. (Even the names lack subtlety.)

Sometimes with Day-Lewis, as with Anderson, you can’t help but feel an “A for effort” at play. From his crafted American accent and to his tortured gait, Day-Lewis’s acting can be as much crafted than craft. Where in Gangs of New York he desperately tried to connect England to Brooklyn, here he affects a gravelly growl of a Western accent that mimics a later-in-life John Huston. At almost no point in this film do you not realize that Day-Lewis is acting; he’s not as egregious as others of his generation (Ethan Hawke, anyone?), but when you’re enduring a nearly a three-hour tour, it can’t help but wear on you.

The same can be said for Anderson, whose stories of delusion and failed humanity have the best of intentions. Working earnestly from Sinclair’s novel, Anderson tries to tell the story of Plainview’s tunnel-visioned quest for oil in the California desert, at the expense of every potential human relationship around him and, by extension, his very soul. Over the years — sometimes helpfully marked with titles, other times ignored — Plainview loses the loyalty of his son (intriguing newcomer Dillon Freasier), dismisses potential allies, and encourages a feud with a local preacher boy (Paul Dano, successfully self-righteous and fake) when all he needs to do is stop and realize how successful he’s becoming. “I have a competition in me,” he says, in a rare moment of confiding, to a man who claims to be his half-brother. “I don’t want people to succeed.” He can barely bring himself to even speak the word “people,” as if it’s bad luck. It’s to Daniel Day-Lewis’ credit that he hit every emotional note required of his character; it’s only a bummer he makes sure you know it as he does it.

The competition is so obviously set up, and Plainview’s downward spiral so easily predicted, that about minutes into There Will Be Blood, the audience can figure out just about everyone’s trajectory. The rest is all filmmaking prowess wrapped around an episodic script. Few directors so nakedly betray their love of long tracking shots, extended scenes and darkly lit close-ups than Anderson.

Working with his longtime cinematographer Robert Elswit, Anderson turns the California desert (really Texas, but who’s counting?) into his own special palette, with black gushers choking and staining his deep blue sky and the sun dictating every single mood. But if Anderson thought all that visual skill could help Day-Lewis salvage a rather predictable story, he might have miscalculated.

And if he thought Radiohead lead guitarist Jonny Greenwood could capture the proper mood with his string-crazy soundtrack, well, guess again. Greenwood’s music is in a constant state of angst and tension, groping to telegraph the import of the next scene.

By the end of There Will Be Blood, Plainview makes good on the title, in a rather unexpected and curious way, showing how unrepentant a man can be — even when his life clearly shows how wrongly he’s lived it. Some lessons are never learned. Hopefully, someday, Paul Thomas Anderson will learn a few lessons of his own, the first one being that when people notice you trying so hard to film an epic, you might just fall short in the effort.