Given the chance during Wednesday night's meeting to discuss the threat of a federal lawsuit, the Lafayette Parish School Board decided to ignore the issue, instead opting to go home early.

Given the chance during Wednesday night's meeting to discuss the threat of a federal lawsuit, the Lafayette Parish School Board decided to ignore the issue, instead opting to go home early. 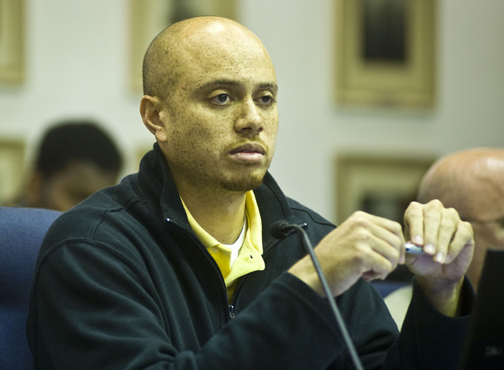 The unfiled suit is an attempt by Cajundome Director Greg Davis and his attorney Gary McGoffin - both longtime advocates for the Lafayette Parish School System - to put a stop to the board's push for Superintendent Pat Cooper's termination. The suit calls for the disqualification of board members Mark Allen Babineaux and Tehmi Chassion from voting on any issues related to the board's investigation of Cooper. The suit provides a long list of examples of bias committed by Babineaux and Chassion against the superintendent since his arrival in Lafayette in 2012.

It also addresses the stalemate caused by this year's budget process between Cooper and a majority contingent of the board over the board's refusal to accept the superintendent's repeated recommendations to balance a $23.5 million shortfall with the system's $66 million reserve fund. The board prefers sweeping cuts, which would mean critical staff reductions, a loss of services and an inability to purchase needed classroom materials that are in line with current education standards. To address the budget impasse, the suit calls for the board to invoke a state law allowing public bodies to use up to 50 percent of the previous year's budget, which would allow the school system to bide time until a new board is elected in November and a budget that isn't damaging to students and teachers can be passed.

The board learned of the issue Tuesday, prompting board member Shelton Cobb - one of Cooper's three supporters on the board - to call for an executive session during Wednesday's meeting to discuss the ramifications of the potential lawsuit.

Yet, the board wasn't having it, and voted 5-4 against the executive session - with the five votes coming from Chassion, Babineaux, Rae Trahan, Tommy Angelle and Hunter Beasley - thereby refusing even a discussion of the lawsuit's ramifications as recommended by their own attorney, Bob Hammonds.

Immediately following the vote on executive session, the board called for an adjournment of the meeting, leaving the issue completely ignored.

Despite hopes that the issue could be resolved outside a court of law, attorney McGoffin - who also serves as The IND's legal counsel - says the lawsuit will be filed today [Thursday] in federal court, starting with a request for a permanent injunction against the board, and in particular, board members Chassion and Babineaux.

"We tried to work it out with them, and they've left us with no choice but to file," says McGoffin during a Thursday morning phone call with The IND.

Since the board has yet to file formal charges for Cooper's termination, McGoffin says he'll wait before requesting a preliminary injunction hearing, which would speed up the process and allow for the presentation of evidence and the calling of witnesses. A request for an accelerated hearing will be submitted for the budget issue, and that should happen sometime next week, says McGoffin.