Supporters have managed to delay demolition, but the wrecking ball could be on site any day.

[Correction: There will not be a candlelight vigil Friday night at the site; that event will take place at a later date. This story has been adjusted to reflect that.] 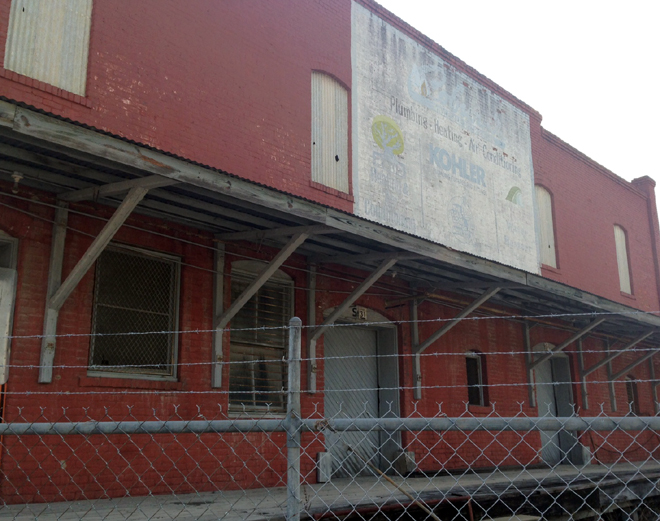 The Downtown Development Authority and members of local beautification group are rushing to save a 130-year-old brick building at the north edge of Downtown that is months overdue for being demolished. The building is one of several hemmed in by Third, Cypress, Grant and Second streets that was once home to Coburn's Supply Co.

The company has since moved and the state Department of Transportation and Development bought the lot, as it's been doing with much real estate near the railroad tracks, to eventually make way for the elevated Interstate 49 connector that will roughly follow the path of Evangeline Thruway. (The plan is actually years if not decades away from beginning due to funding and other concerns.)

Nathan Norris, DDA's executive director, has been pulling every lever at his disposal to save the red brick warehouse on the lot. 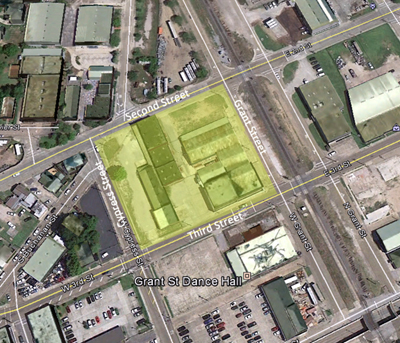 Located adjacent to Grant Street Dancehall, the lot slated for
demolition is bound by Cypress, Second, Grand and Third streets.

"DDA is opposed to the demolition because there is no need to demolish the building at this time because there is not a finalized design for the I-49 connector, let alone a funding source for the billion dollar project," Norris says. "While we are supportive of the I-49 connector as well as the interchange, we are not supportive of destroying one of our few surviving historic buildings from the 1880s until there is a funding source identified for the project."

Norris actually learned second-hand of the planned demolition around Mardi Gras, after which he contacted DOTD officials who told him if DDA could pay the cost of cancelling the $125 demolition contract with Hamp's Construction in New Orleans, the state woujld be willing to enter into a shared-use agreement with DDA.

Easier said than done: Norris assumed it would cost about $30,000 to cancel the contract. But when he contacted Hamp's they said they would cancel the contract for $349,000, nearly three times the value of the contract. Hamp's told Norris they expected to fetch roughly $500,000 by selling the salvage from the demolition, notably the antique red bricks and wood beams that comprise the building.

Norris has managed to secure some delays in razing the buildings, but says he got a call last week from DOTD Secretary Sherri LeBas telling him the agency has decided to execute the demolition contract, which means a Hamp's wrecking ball could be on the site virtually any day.

The building's imminent demise also caught the ear of Lafayette Roadside Pride, a local beautification group. Member Robert Guercio has been exploring other avenues through the state Department of Recreation, Culture and Tourism to find a way to save the brick edifice. And he takes exception with DOTD spokesman Rodney Mallet's comment in today's Advocate that the area will eventually need to be cleared for the I-49 connector. 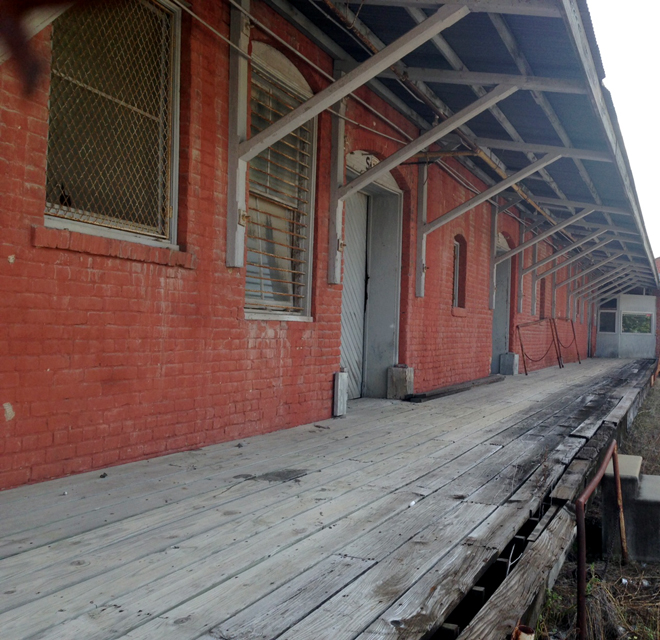 "This is an inaccurate statement," Guercio says. "The area does not need to be cleared. A design firm was recently hired to engage impacted communities, concerned citizens plus other stakeholders and officials -before- finalizing the engineering drawings connecting the I-49 corridor to downtown Lafayette. What we need is a low impact urban design with single lane on & off ramps like in downtown Baton Rouge & New Orleans."

Norris says he opposes the demolition for several reasons, among them the likelihood that creating a void will slow redevelopment of adjacent areas and that the historic building - aside from the fact that it's historic, hello - creates a sense of enclosure that is vital to a downtown aesthetic.

"Once demolished, the blighted area around the railroad tracks will no longer be screened from the area across the street, which is available for redevelopment," Norris adds.

Supporters of saving the building have set up a Facebook page, Protect & Preserve.

"Our primary goals are to save the historic building(s) and beautify a major gateway into Lafayette," Guercio says. "We are confident this will also have a significant economic impact for Downtown Lafayette."