The third annual Eagle Expo celebrates the prolific return of the once endangered bald eagle. 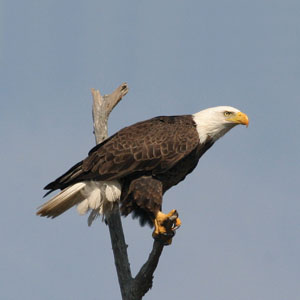 When wildlife photographer C.C. Lockwood began his campaign to save the Atchafalaya Basin from being drained in the 1970s, he spent a lot of time out in the basin filming its beauties and riches. Back then, Lockwood says, there were only seven known eagles’ nests in the state. The decline of the North American eagle population was traced to the use of DDT, an insecticide used to combat mosquito-borne malaria. Ten years after the 1962 publication of Rachel Carson’s seminal work, Silent Spring, the use of DDT was banned in the United States.

Lockwood will lead a digital photography workshop focusing on long lenses and bird photography, including a boat trip into the basin. “The eagles come to Louisiana in late November and repair their nests,” says Lockwood. “They lay eggs in December and early January, and the babies should be hatching right now. By late March the babies are flying around with their parents; then they disappear for the summer. We have a winter nesting population. There’s a whole other population that nests in the summer in Michigan and Canada.

“If you are motoring around in the marshes, just look up at the tallest cypress tree. Some of the nests are as big as a Volkswagen. You know you’ve seen an eagle’s nest.”

The Eagle Expo will take place Feb. 14-16 in Morgan City. For a complete event schedule, which includes lectures and basin tours, go to eagles.btnep.org or call the Cajun Coast Visitors and Convention Bureau at 985-395-4905.