An application for a water discharge permit from Multi-Chem - a company with a troubled past - has sparked protests from Vermilion Parish residents. 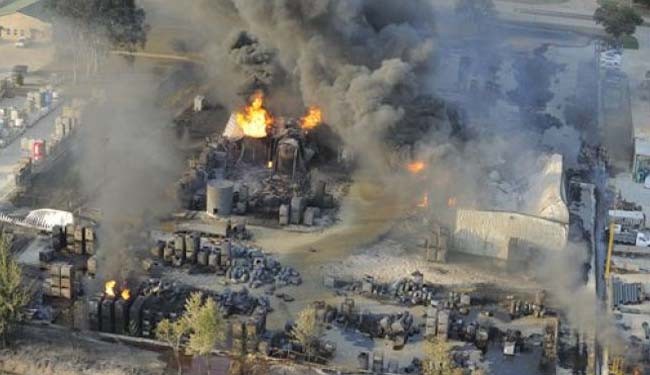 In 2011, Multi-Chem's New Iberia plant went up in flames after a series of explosions at the compound, resulting in a two-day evacuation effort.

An application for a water discharge permit from Multi-Chem - a company with a troubled past - has sparked protests from Vermilion Parish residents.

If approved, the permit would allow Multi-Chem to release reverse osmosis reject water into parish waterways, impacting Bayou Grand Marais and Bayou Queue de Tortue, according to a report from KATC TV3.

Multi-Chem is owned by Halliburton, and according to company spokeswoman Emily Mir, the discharge process is safe.

Yet, for parish residents, that explanation has not eased worries, especially in light of the company's recent history, resulting in a massive explosion at its New Iberia plant during the summer of 2011. That resulted in a two-day evacuation of the area, and ultimately destroyed the company's New Iberia facility, prompting a move to Vermilion Parish, near Maurice.

A number of violations resulted in the company being fined $49,000 from OSHA, yet they were allowed to pay a reduced settlement of only $24,500, and escaped sanctions from the state Department of Environmental Quality and the U.S. Environmental Protection Agency.

In fact, shortly after the explosion, the company received a $1.85 million property tax exemption for 10 years from the state to build its new facility near Maurice. The state even went a step further and allowed the company to forego the public hearing process in acquiring an expedited air permit.

A group of residents, however, responded with the formation of the Citizens Against Multi-Chem, led by Macella Manuel, who lives right by the new plant has been researching the company's other violations in other states.

"A place like that needs to be in an area that is zoned specifically for industrial zone use because you don't have residents and you don't have schools nearby, you have evacuation routes in place, you have HAZ MAT personnel," Manuel tells KATC. "The state did not even do full background checks on Multi-Chem. They've been shut down for violations in places like Ventura, Calif. When they start here we are looking at about 11,000 gallons a day here in Vermilion Parish. We have 42 chemicals that are considered toxic and hazardous and they would be combining any of these in there. We don't know if our livestock is going to be safe, if our animals will be safe or the fish in the pond. Ultimately that ends up meaning are the humans safe?"

While Multi-Chem awaits DEQ's approval for the discharge permit, it's currently sending its reject water to a site in Arkansas, KATC reports.