An ’80s pop-culture icon gets back in the fight in Rambo. 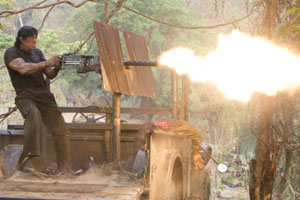 Old soldiers like John Rambo never die. And this world of war we live in apparently will never even let them fade away.

Twice now, the post-traumatic-stressed Vietnam veteran Rambo (Sylvester Stallone) has tried to retire to the lush jungles of Thailand, having had his fill of his native country and the killer it created inside him, and twice he’s been called out for a cause. The first time, in Rambo II, it was to help out his old friend Col. Samuel Trautman (Richard Crenna) when he found himself in an Afghanistan jam. The movies’ most magnificent good-guy-turned-controlled psychopath dutifully dropped in and, per usual, killed everyone that stood between him and his rescuee and the border.

And then, poor guy, he tried to go back to Thailand and just mind his own business again. He is Rambo, however, so keep in mind that his own business includes making a living capturing cobras in a burlap bag and selling them to a local snake show, fishing by bow and arrow, and steering clear of anyone who wants any kind of conversation of the non-profane, polysyllabic variety. Judging from Rambo’s dour demeanor — what another character derisively dismisses as his “thousand-yard stare” — Thailand doesn’t seem to have delivered the peace it promised him in his earliest days there. Still, he’s quiet and ostensibly not offing the local population, so life, by his standards, is probably pretty OK.

Leave it to a group of well-intentioned missionaries to upset the rotten-apple cart.

One day, Rambo is approached by group leader Michael Burnett (Paul Schulze), a doctor missionary leading a team of Coloradan aid workers who want to carry medicine and Bibles into the civil-war hell of Burma. The group needs a boat, not a badass, but like all of the characters in this film, they don’t realize to whom they are speaking. There’s an inherent audience thrill in the fact that we do, the slyest script trick employed by writers Stallone and Art Monterastelli.

Rambo resists Burnett’s nonexistent charms (for a missionary, he’s kind of a jerk), but ultimately can’t say no to Sarah (Julie Benz) and her sweet-voiced, cynicism-free, change-the-world agenda. Long set-up of story short, the missionaries won’t listen to Rambo’s warnings, not even after he kills a boatload of Burmese pirates to keep them from carting off Sarah, so our hangdog hero watches them walk off into the middle of the world’s longest-raging civil war. Barely have the aid workers reached their village destination and set about delivering medicine and message before the Burmese bad guys move in, obliterating the town, conscripting the young boys, killing everyone else, and taking the Americans captive.

The pastor of the missionaries’ home church (a sadly underused Ken Howard, who so easily could have shouldered the kind of heft that Crenna’s Trautman provided the earlier films in the series) appeals to Rambo for help in landing a group of hired guns near where he dropped off the missionaries. The mercenaries treat Rambo with disrespect, all except a sniper named School Boy (Matthew Marsden) who’s apparently the only one on the boat smart enough to know that talking tough and being tough are two completely different things.

One thing leads to another, and pretty soon, Rambo is back in the jungle, and he’s bringing the pain to an endless supply of sadistic soldiers. He’s older now, of course, so things are a little bit different. He relies a little too heavily on a little help from his newfound mercenary friends. And exchanges his surgical-strike fighting style for the finesse-less firepower of a .50-caliber machine gun.

But some things never change. The killing is fast and furious and bloody as hell. Stallone the director allows Stallone the actor to literally rip a guy’s throat open with his bare hand. The truck-mounted machine gun makes hamburger of the bad guys for much of the film’s climactic fight scene. And there is the one wonderfully iconic moment when a super-stealthy Rambo slowly appears from below and behind an unsuspecting soldier, knife in hand, righteous fury in eyes.

It’s a real Rambo movie, basically, with all the good and the bad that that implies. But after all this time, who knew it would be possible? You can knock Stallone for many things, but knowing his characters inside and out isn’t one of them. Like last year’s Rocky Balboa revisitation, Rambo rings true.