Yeah, it's the "ice bucket challenge," with throwing and running and hard nipples. 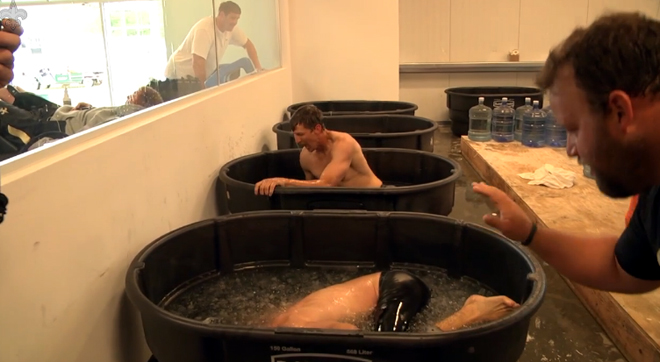 As part of the contest, Saints quarterbacks had to soak for 10 seconds in vats of ice water.

Inter-position competition among Saints quarterbacks at training camp is legend - and not just for pole position in the game-day lineup. (Drew Brees is the starter and no more than three of the four quarterbacks in camp - Luke McCown, Ryan Griffin and Logan Kilgore being the others - will make the final, regular-season roster.)

But the QBs find creative ways to push each other, and their latest tilt - a throwing competition centered around the ALS Ice Bucket Challenge - not only pushes the competition envelope, it raises funds for former teammate Steve Gleason's mission: combatting amyotrophic lateral sclerosis, AKA Lou Gehrig's disease - the crippling nervous disorder that has forced Gleason, a former defensive back with the team famous for his punt block in the 2006 home opener against the Atlanta Falcons, into a wheelchair and onto a respirator.

Spoiler alert: Brees does not win this contest.

Check out the video here at NewOrleansSaints.com.