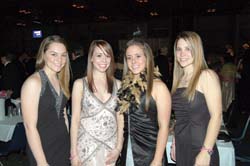 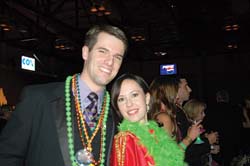 It’s been a whole week since Mardi Gras, and Party Girl still hasn’t recovered; clearly the carnival season came too early this year. Party Girl did muster up enough energy to attend the annual Krewe of Xanadu ball. This krewe in particular always marks a highlight of the Mardi Gras season, and this year was certainly no exception. With its “Girls Gone Wild” theme, the all female krewe — famous for its pink wigs and choreographed dance numbers — celebrated the reign of its only male member, King Xanadu XVIII, John Bordelon. A fabulously decorated Cajundome Convention Center turned out a show that was part circus, part zoo and part cat walking, much to the delight of the capacity crowd. Hundreds of screaming fans swarmed the stage hoping to catch a glimpse and some beads. Party Girl was in a sea of marvelously dressed men and women. I almost felt out of my element with a dress that was obviously so last year — I won’t make that mistake again! The very next night the Krewe of Triton lit up the night and burned down the house inside the Cajundome with its “Burn Baby Burn” themed ball. Triton’s unusual indoor parade was particularly sizzling this year, featuring beautiful floats with risqué themes. My favorite float was “The Firefighter and Flaming Dessert” and I cannot forget my favorite Duke — Scott Coco aka “Surfer Dude” and Amanda Whittenberg aka “The Hawaiian Fire Dancer.” Cowabunga dude! The atmosphere throughout the night was highly charged and turned explosive when the dancing started. After all the cardio exercise my date and I had on the dance floor, I was literally dancing my way into Mardi Gras day. Besides, when you splurge with a couple of drinks here and there and everywhere — they eventually add up to one big flaming hangover. On to the next season. Party On! — PG 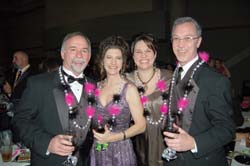 Douglas and Michelle Truxillo with Julie and Bo Underwood 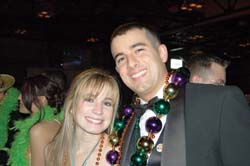 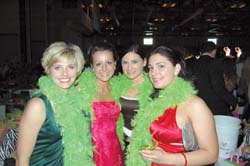 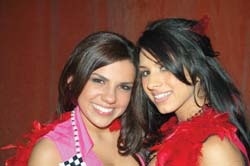 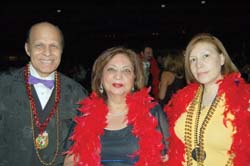 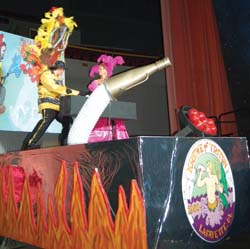 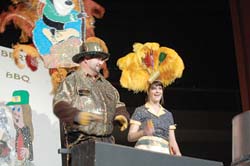 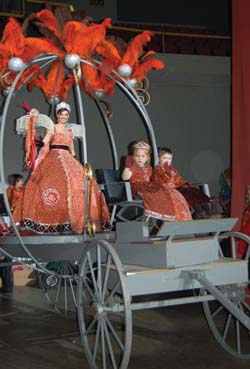