After two years of turmoil, one of Lafayette's premier art galleries is moving out of its flagship downtown location. 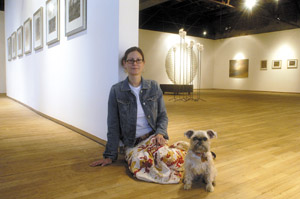 Earlier this month, Jennifer Grand gave notice to her landlord, Roselawn Properties, owned by Kathy Ashworth, that as of Jan. 1, her art gallery, Grand Contemporary, will no longer lease space on the second floor of the historic Attakapas Ironworks Building on the corner of Jefferson and Vine. "I feel like there's a time bomb waiting to explode," Grand says of her difficult relationships with Ashworth and downstairs tenant Jason Robino, who owns the hip-hop club Rain. "I walk into this beautiful space full of light, and all I feel is unbearable tension."

Grand says a litany of problems finally added up to the decision to seek another space for the contemporary art gallery. The most troublesome issue is the lack of a long-term lease to protect Grand's investment in the gallery ' a problem Grand acknowledges is as much a fault of her naiveté and trust as it is Ashworth's.

A lease negotiated in September 2004 stipulated that Ashworth would provide the unfinished upstairs warehouse space to Grand for three months at no charge ' other than utilities and prorated taxes ' to allow Grand to get up and running. Before the two women began talking, Ashworth had planned for the upstairs space to be used as offices, and began installing a metal ceiling over a hallway and exposing rafters and ceiling trusses. The office spaces were never built, and much of the 3,000-square-foot space was filled with stored items and construction debris. Despite the mess, Grand says she took one look at the huge loft and was hooked. Ashworth, too, was thrilled, Grand says, about the idea of turning the space into a major art gallery. "It is my hope," Ashworth wrote to Grand in a letter outlining the lease, "you will grow into the entire space quickly. I would like to see you occupy the entire floor." Grand signed, and the lease was notarized for approximately 1,500 square feet at $9 per square foot for one year, beginning October 2004 and ending September 2005. She sent it to Roselawn but never received a copy back with Ashworth's signature on it.

As soon as the lease was agreed on, Grand began a major renovation project that involved demolishing existing walls, rebuilding walls for art exhibitions, cleaning brick, scraping paint off dozens of antique window panes, installing lighting, refinishing floors, remodeling the bathroom and kitchen and enclosing the stairwell. She and silent partner George Marks invested approximately $30,000 in materials and three months of sweat equity into the building. "I'm very sentimentally attached to the space," Grand says, gazing out of the big windows overlooking Jefferson Street. Her eyes well with tears when she talks about the renovation. "I worked on it with my dad."

The lease Grand signed is a "triple net" lease ' which means she rented the space "as is." Ashworth guaranteed roof repairs; all responsibility for repairs, maintenance, utilities, insurance and taxes belong to Grand. Triple net leases are not uncommon, but the section about utilities became a thorn in Grand's side. Ashworth spelled it out for Grand: "You will have a shared meter with RAIN downstairs. ... You will need to work out how to pay the bill with RAIN ' either each of you writing a check each month, or having RAIN continue to pay it and you reimburse them. Whatever the two of you work out is OK with me."

Things didn't work out between Grand and Robino. There are huge disparities in power and water usage between a nightclub and art gallery; Grand says Robino was overcharging her by asking for 35 percent of electric costs, and when she disputed the amount, he shut off her electricity. Attempts to get Ashworth to split the meters were met with the statement that if the tenants wanted their own meters, they should bear the $10,000 cost.

On one occasion, Robino shut off Grand's power for five consecutive days. At that point, Grand hired attorney James Dill to help her enforce state law, which requires that a tenant be allowed to do business. Dill says the meter dispute caused the rift between Grand and Ashworth. "Kathy washed her hands of it after Jennifer got into it with Jason," he says.

Grand also complains that Robino, in retaliation, cranks up the music in his club so loud that her floors vibrate and paintings slither sideways on their hooks. She has called Lafayette police multiple times. Grand Contemporary has lost a number of private events as a result of the noise barrage. "Because of the noise, I had to turn down four weddings in June. That's $1,500 each ' $6,000 I could have made in my slowest time of year," Grand says. Robino did not return phone calls for this story.

Grand continued to ask for a copy of her lease and asked Ashworth to intercede in the beef with Robino. Ashworth did not return calls and e-mails for comment on this story. It's not the first time Ashworth has been involved in a contentious dispute with Roselawn tenants. In May 2005, Acadiana C.A.R.E.S filed suit against Roselawn in a dispute over insurance costs, repairs, security systems, access to an elevator and payment of utilities ' an issue that involved both Robino and Grand, who were on C.A.R.E.S' water bill ("Homeless for the Holidays," Jan. 11).

There is an "Option to Renew" clause in Grand's lease, giving her the ability to renew the lease for an additional year, with a potential rent increase of not more than $1 per square foot. The lease also states that should the lessee remain on the premises beyond the option year, the lease will convert to a month-to-month lease. Grand again asked for a signed copy of her lease but says she was told that the lease had been lost. She also says she had every intention of renewing and tried to work with an unresponsive Ashworth. Meanwhile, Ashworth signed an affidavit in the C.A.R.E.S case on Aug. 17, 2005 stating that Grand was on a verbal month-to-month lease. Grand objected that her lease was in good standing through September, but with no cooperation from Ashworth, her lease expired, and she found herself in a precarious situation. (C.A.R.E.S and Roselawn settled their suit in April 2006.)

Grand continued to have problems with Robino, and in the late spring, the air conditioner began to fail. Grand contends that every time she complained, Ashworth or Roselawn Properties' Property Manager Jim Wilks threatened to double her rent. While sales were good, Grand says, the stress of the situation was taking away from her ability to run a new business.

On Saturday, Sept. 16, Grand and Marks opened a new satellite gallery in Breaux Bridge. The Grand Contemporary aux Pont Breaux was conceived as a selling gallery to complement the big exhibition space on Jefferson Street. It's 300 square feet compared to about 3,000 square feet she occupies in Lafayette, but the second location gives Grand a sense of security.

"How do you grow a business when bullies are threatening to cut off your electricity or double your rent?" Grand says. "I feel like I'm getting pushed out. Jason wants the space for a dance floor, and [Ashworth] could get a lot more money for this place." This month Grand gave notice to Ashworth that she was leaving in January. "There's still a feeling of uncertainty," Grand says. "They could kick me out in 30 days." She's actively looking for another gallery space downtown and has placed work with interior designers in Baton Rouge and New Orleans.

While Ashworth declined comment, Roselawn's Wilks told The Independent Weekly in an e-mail that Roselawn does not discuss its tenant dealings and wished Grand Contemporary continued success in the future. "We consider the relationship between our company and those that lease from us as confidential," he says. "We consider it a significant lack of professionalism when unfortunate articles such as the one your are contemplating are published. I fail to see how Roselawn's business dealings are newsworthy."

However, Wilks did note that "we would like your readers to know" that the 27,000-square-foot building that houses Grand Contemporary, RAIN and Acadiana C.A.R.E.S has been listed with Van Eaton and Romero. Ashworth bought the building in 1999 for $142,500. It is currently listed at $2.2 million.