A lawsuit filed against Lafayette Consolidated Government contends that LCG's SafeSpeed and SafeLight programs are unconstitutional. 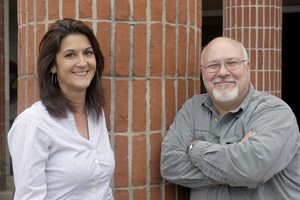 KVOL 1330 AM morning radio host Todd Elliott saw City-Parish President Joey Durel’s annual State of the City-Parish address, held last week at the Cajundome Convention Center, as the perfect opportunity to deliver a surprise message to the parish’s top official. With a crowd of about 600 people on hand at the event, Elliott went up on stage moments after Durel finished his speech to hand him a summons for a lawsuit filed against the city earlier that day in federal court. KATC TV3’s cameras were rolling as Elliott told Durel, “Consider yourself served, sir.” Elliot’s radio show cohort Brennan LeBlanc, appropriately nicknamed Badger, was there to hand off a similar summons to City-parish Councilman Purvis Morrison.

The lawsuit claims that two programs recently launched by Lafayette Consolidated Government — SafeSpeed and SafeLight — violate citizens’ constitutional rights. The programs use cameras placed in vans and mounted at intersection lights to catch drivers who speed and run red lights, then ticket them through the mail. The Arizona-based company Redflex administers the programs at no cost to the city, keeping approximately 60 percent of the proceeds from tickets.

A newly elected councilman, Morrison says the city was expecting the lawsuit and that he’s looking forward to getting some clarity on the issue from the courts. Morrison’s rural district doesn’t see many of the speed vans, and he’s been on the fence about the issue. “It’s a tough decision,” he says. “That’s what’s good about the lawsuit. It’s going to finally show if this is constitutional or not.”

The suit uses some stark language in arguing that the process being used to ticket offenders denies citizens of some fundamental rights. It states the local ordinances authorizing the programs are attempts to “transform existing Louisiana traffic/criminal laws into ‘civil’ violations, in a manner calculated to destroy plaintiffs’ Fifth Amendment rights,” adding, “this trampling of plaintiffs’ civil rights is enforced by the defendants while acting under color of law.” The suit also alleges the programs violate the Fourteenth Amendment because they “impermissibly place the burden of proving innocence upon the plaintiff.”

The case is being handled by the Metairie law firm of Joseph R. McMahon III. The firm also recently filed a similar suit against Jefferson Parish government over its camera ticketing system. Anthony Maska, one of the firm’s attorneys, says the case is about holding a line on due process rights. “The Constitution doesn’t give us rights,” Maska says. “The Constitution protects us from the government because we have rights that are God-given, and the government can never interfere with those rights. You cannot allow the government to erode those rights no matter how small it appears or no matter what the good intention.”

Violations caught by SafeSpeed and SafeLight cameras are processed in Arizona, where Redflex employees match license plate photos with vehicle registrations. All violations are then checked by LCG’s Traffic and Transportation Department before being mailed out. All tickets can be appealed through an adjudicated process similar to the one set up for parking violations. Vehicle owners who receive tickets can also sign an affidavit saying someone else was driving the vehicle.

Similar traffic camera programs have cropped up across the country, with Redflex being the leading vendor. On its Web site, Redflex says it has contracts with 180 municipalities in 20 states. The programs have already generated several legal challenges. Last year, the Minnesota Supreme Court ruled against a red light camera program in Minneapolis, stating that it went against a state law requiring uniform traffic laws across the state. Courts in Ohio deemed similar programs legal under its state regulations.

“They’ve gone both ways,” Maska says, adding that he feels good about making the case in Louisiana, partly because the municipalities in question have largely acted on their own, without any accompanying state legislation. “The majority of the ones that we’ve seen that have been struck down have all been without state enabling legislation,” he says.

The suit lists Lafayette Consolidated Government, the Lafayette City-Parish Council, City-Parish President Joey Durel and Redflex Traffic Systems as defendants. Lafayette residents Stephanie Ware and Phil Abshire are the two named plaintiffs, with the attorneys seeking class action status for anyone who has received tickets through SafeSpeed and SafeLight. In less than five months of operation, Redflex has reportedly issued some 18,000 violation notices to parish residents.

Calling themselves Valiant Lafayetteers, Elliott, Ware and Abshire are part of a vocal group that has been spearheading the opposition to SafeSpeed and SafeLight. Ware is a private investigator who has frequently questioned the legality of the program. She received a SafeSpeed ticket after lending her car to her daughter. Abshire successfully challenged a flawed ticket he received earlier this year.

With his morning radio show as his primary platform, Elliott has been the most outspoken critic of SafeSpeed and SafeLight. He began a petition against the programs last year, and to date says he has collected more than 4,000 signatures. Elliott, who could never be accused of being media-shy, once held a petition drive in the KVOL parking lot where he encouraged visitors to come by and swing a baseball bat, a tire iron, or a an axe into an old abandoned van meant to represent SafeSpeed. The next day, a picture appeared in The Advocate of Elliott on top of the van, wielding the bat up above his head and preparing to pound another dent into the already totaled vehicle. Elliott has also been out “doing counter surveillance,” where he turns his own video camera on SafeSpeed vans and attempts to interview the Redflex employees manning them. He later posts the videos on YouTube.

By filing suit, the group is simply following the advice Durel gave them, according to Elliott. “He suggested in various e-mails that we get legal counsel and that we play lawyer ball with him,” Elliott says. “So that’s what we’ve done.” Since he is not a named plaintiff in the suit, Elliott was allowed to personally serve the summons to Durel.

“I just thought it was apropos,” Elliott says of his idea to give Durel the suit at the State of the City-Parish address. “I knew that there were four major media [outlets] there that day. It was convenient.”

During his speech, Durel drew applause after stating, “Technology has allowed us to help our police slow down traffic. We have all seen the reports of terrible accidents that have resulted in young people losing their lives because someone was speeding. I want you to hear this — I will never, ever apologize for finding ways to change the habits of bad drivers.”

After being handed the suit, Durel told KLFY that the plaintiffs “should be ashamed” and suggested they should apologize to Lafayette parents who have lost children in car accidents due to speeding.

“We rained on his parade,” says Elliott, “but I don’t feel any shame personally in doing that.”

In an e-mail to the Independent Weekly, Durel responds, “I don’t deal with stunts. I deal with serious people that conduct themselves like adults. When one is served with a lawsuit in a public forum, with TV camera in tow, it’s kind of hard to think that the primary objective is not publicity as opposed to getting a judicial opinion on these important matters.”

Durel is confident that Lafayette has instituted its SafeSpeed and SafeLight programs legally, with ample checks and balances. “Cities all around Louisiana and hundreds around America have installed cameras as solutions to dangerous drivers,” he states. “All have implemented them under the guidance of legal teams that I am certain understand the laws and Constitution of our country. I have the utmost confidence in [city-parish attorney] Pat Ottinger and I trust his ability to interpret our laws.”