By identifying companies that match the output of its post-secondary educational institutions, Lafayette is creating opportunities that keep highly trained graduates in the area.

Going into Reverse
By identifying companies that match the output of its post-secondary educational institutions, Lafayette is creating opportunities that keep highly trained graduates in the area. By Gregg Gothreaux 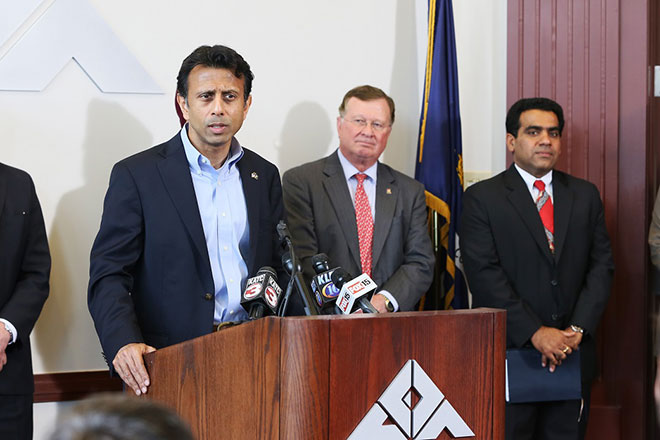 In early July Gov. Bobby Jindal and UL President Joe Savoie join Enquero's Hemant Asher to announce that the company is bringing its first high-performance technology center, which will provide enterprise software products and services to commercial clients, to Lafayette.

It's not often that a community can witness the birth of a new industry sector. But that is what's happening right now with the technology/digital media sector in Lafayette. With two major business recruitment announcements since April and other projects in the works, Lafayette has firmly established itself as a technology hub, not only in the South but in the entire U.S.

For more than 30 years Lafayette has been building a reputation as a technology-savvy community. These two announcements are the culmination of more than 30 years of work that began with the Silicon Bayou initiative in the 1980s, Zydetech in the 1990s, and LUS Fiber in the 2000s.

The idea that Lafayette could be a technology hub has long historical roots in the region. UL Lafayette was among early national leaders in the field of computer science - offering the nation's first master of science program. Phoenix Computer Graphics, a Lafayette-based company, unveiled the Phoenix 1024 in 1982. The system produced the highest quality graphics possible at the time. In 1986, the first privately developed satellite positioning system in the U.S., developed locally by John Chance, was deployed in the Gulf of Mexico. The precursor to today's wireless communication can also be traced back to oilfield communication in the 1980s.

For decades, community and business leaders have understood that technology helps to create a stronger and more diverse economy in Lafayette. The Fiber to the Premise project is a perfect example. In 2005, Lafayette voters gave LUS the authority to build the fiber project. This overwhelming community support for this critical investment in Lafayette's future helped to provide the infrastructure upon which future generations of success will be built. LUS Fiber now offers 1 Gbps connectivity to both commercial and residential customers - allowing users, around the block or around the globe from each other, to communicate at incredibly fast speeds.

The strength of our superior education programs, our investments in community assets such as LUS Fiber, and our innovative spirit all played an important part in the decision-making process for CGI Federal officials. In April, CGI announced that its 400-employee technology center would be located in UL Lafayette's Research Park. Employees at the Onshore IT Services Delivery Center will develop complex business and IT solutions for clients. These jobs will have an average annual salary of $59,000, plus benefits. The first location of the Center for Software Excellence, a joint venture between UL Lafayette and the South Louisiana Community College, will also be located at the center.

From participating in the LEDA Job Fair last May to sponsoring a portion of the Building Community Conference in June, CGI is seeking out opportunities to become active corporate citizens in Lafayette. LEDA continues to work with the company as it finalizes its temporary location and gears up its employee recruitment efforts. 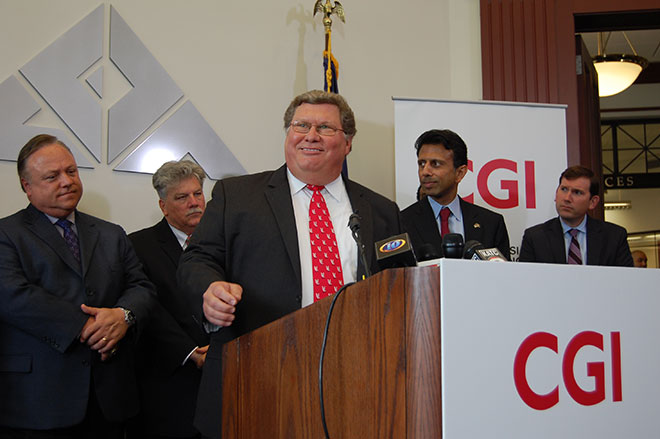 On the heels of the CGI announcement, Enquero Inc. announced in early July that Lafayette would be the location for its first Agile Delivery Center, a high-performance technology center providing enterprise software products and services to commercial clients. The company will create 350 new direct jobs with an average salary of $64,300 per year, plus benefits. The project will result in 354 additional, new indirect jobs. Enquero will be a member and tenant of the Opportunity Machine, Lafayette's business incubator and accelerator. From its location at the LITE, Enquero will be able to leverage LITE's technology assets and expertise as well as establish connections with UL Lafayette Informatics and Computer Science students.

With commitments to create 750 new technology positions in Lafayette over the next three to five years, LEDA's "reverse" business recruitment initiative has been successful. By identifying the companies that match the output of our post-secondary educational institutions, we are creating opportunities to keep our highly-trained graduates in the area and to attract those who want to make Acadiana their home. The initiative will continue as our researchers and recruitment staff identify additional target companies and sectors that complement our existing business base.

In 2011, Southern Business and Development included Lafayette in two of its annual Top 10 lists - Ten Notable Collective Economic Development Efforts in the South and Ten Places in the South where Digital Media has Clustered. The Opportunity Machine was singled out by the publication as the most recent in a long line of successful community-wide initiatives. With an emphasis on technology-intensive businesses, the OM has served as a launch pad into the market for numerous companies, including Pixel Magic, the Academy of Interactive Entertainment, Rader Solutions and now Enquero.

Even more so today than in 2011, Lafayette is a hub for technology and digital media. Following the CGI announcement, Stephen Moret, Louisiana Economic Development secretary, commented that we had just launched a new industry in Lafayette and great things are in store for the community. Moret and the team at LED understand that the technology sector is fast-paced and they are willing to keep up with that pace to make sure Louisiana offers the best opportunities for its residents.

I've said that even before there were technology initiatives, there was an attitude - an attitude that Lafayette could do anything it desired and be anything it could envision. Today, I'm happy to say that the community has achieved even more than many thought was possible and we're just getting started.