The national training program Gideon's Promise recognized local public defender G. Paul Marx with its annual Stephen B. Bright award for his efforts to "Improve the Quality of Indigent Defense in the South." The award has been presented annually since 2011 to recognize public defender managers who partner with Gideon's Promise to improve skills for attorneys serving clients in criminal justice. 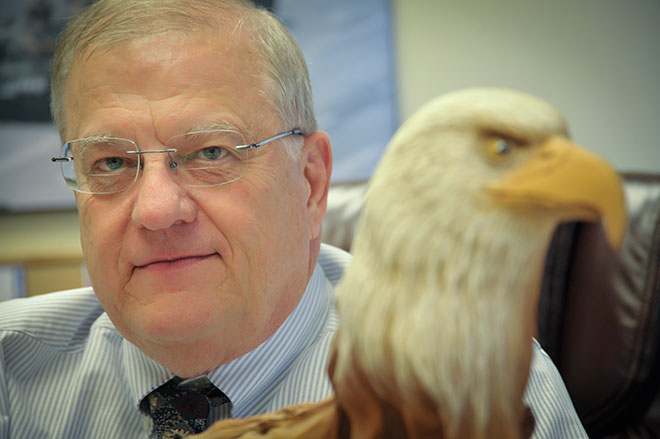 In October 2010, Marx, who has 35 years of experience as a public defender, was appointed by the State Public Defender Board to run the 15th Judicial District Defender Office in Acadia, Lafayette and Vermilion parishes.

The award was presented at the opening banquet for Gideon's Promise at Wake Forest University as part of the welcome for a new training class and a weekend of continued leadership and training for line defenders. (Gideon's Promise was the subject of an HBO documentary released last year and now available on Netflix.)

Part of the change in the local Public Defender Program has been spurred by the intensive two-week training of Gideon's Promise Core 101, which gives public defenders an orientation and skills training in the work. Five new Gideon's fellows will join the Acadiana team this fall, including two graduates of the LSU Law Center, two from George Washington University Law School, and one from the Vanderbilt Law School. Among this new group is Clare Svendson, a Lafayette native and top graduate from the LSU Law Center this past May, and Lillian Hangartner, a 2011 LSU Law graduate who has been with the local Public Defender Office for a year and is active in Lafayette Parish district and city court.

Three other new fellows join the PD program under a Law School Partnership Project through which Gideon's Promise and the law schools team up to help provide funds for training as well as a stipend so that the lawyer's compensation is covered for one year.

"This is an important way for us to recruit and hire young attorneys interested in criminal justice that we otherwise could not afford," Marx says. "They come in with an understanding of criminal justice and the necessity of the right to counsel in the exceptional American model of justice."

Leo Costales, a Vanderbilt Law graduate, is attending the Core 101 program and will join the Public Defender Office in September. Leo completed his B.S. in management at Tulane University before studying law at Vanderbilt.

Thomas Rimmer and Jack Talaska round out the trainees heading down to Acadiana after their legal education at George Washington University Law School. Rimmer is from Mississippi and graduated from Ole Miss with a B.A. in international studies and Chinese, and he also clerked at the Mississippi Supreme Court. Talaska graduated from the University of Wisconsin with a B.A. in political science. He worked at the U.S. Sentencing Commission during his law studies.

"These new full-time attorneys from a variety of experiences, along with our private bar partners who serve as contract counsel, and our full-time core group add up to a strong law firm for Acadiana. We continue to work under the Public Defender Act of 2007 and the leadership of state Chief Defender Jay Dixon to vindicate the right to counsel in a client-centered way," Marx says.

The 15th Judicial District Defender office is back on a firm financial footing after financial issues last year, Marx says, but the continued increase in workload is of concern. "Our short-term outlook is fair, but the state defender thinks statewide there will be major shortfalls," he adds. "Unless our local courts continue to work with my office we could see major problems in two years."

Marx stresses that his office does not handle just indigent defendants. "In Acadiana our clients are over 90 percent of all criminal matters, and many of them are middle class and working poor people. It's more than just answering charges and defending people, because it often includes helping them understand their conduct and the consequences."