The old Daily Advertiser building on Jefferson Street is being rehabbed as the owner prepares to move it back into commerce.

The old Daily Advertiser building on Jefferson Street is being rehabbed as the owner prepares to move it back into commerce.  By Walter Pierce 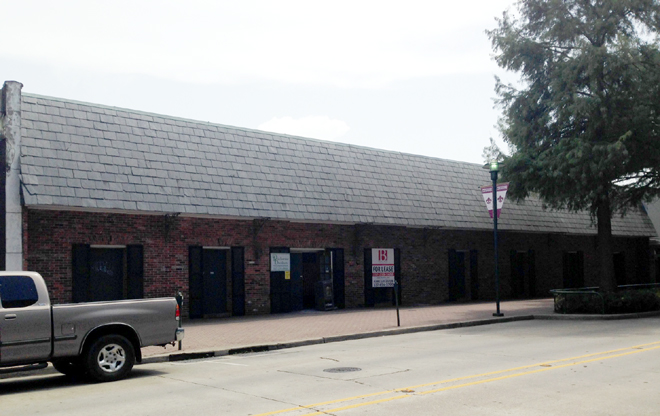 The Bobcat front loader is making a mess of the old Daily Advertiser's interior in mid-August, tearing into sheet rock and support beams, customer service counters and cubicles - virtually no remnant of the newspaper's former headquarters on the 200 block of Jefferson Street is beyond the demolition's reach. A miasma of fine dust swirls through the interior.

Soon, the 13,680 square feet will be in "white box" condition, a developer's term for gutted down to bare walls and ceilings.

"It'll just be wide-open space basically," says Mark Van Eaton, an agent for Beau Box Real Estate, the Lafayette commercial development company handling the rehab and future lease for JD Property Management, the company that owns the building and three other nearby properties that surround what is now a wide open space where until recently the old Advertiser printing press and distribution facilities stood.

This was supposed to happen in 2009, but the Great Recession ground plans for the building to a halt. The original plan for the old Advertiser building was mixed-use: residential, office, retail. The plan now is more modest.

"We are currently in negotiations with an office tenant that would take the entire space right now," Van Eaton says, declining to name the company that will likely set up offices in the shop because negotiations are ongoing.

The upstairs office space where longtime Advertiser Publisher Richard D'Aquin once oversaw a profitable newspaper monopoly will be removed - gone just like the business model that once made print so lucrative. 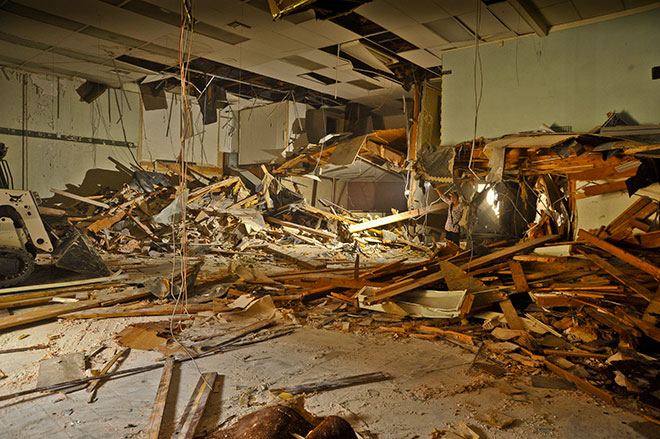 One of the business offices in the former Daily Advertiser building

What likely prompted the decision to get the building back into commerce is a steep jump in the assessed value of the building and an attendant hike in the owner's tax liability. Assessor Conrad Comeaux's office confirms the assessment for the 13,000-square-foot building at 221 Jefferson jumped from $119,400 to $500,140 this year and, as a result, the annual property tax (parish and city combined) skyrocketed from $1,532 to $7,656. That's incentive to start collecting rent.

The start of rehabbing the early 20th century building is also bringing fresh hope for rehabbing a block of Jefferson Street that hasn't fared well in the nearly 10 years since the newspaper decamped to Bertrand Drive.

Nathan Norris, executive director of the Downtown Development Authority, and Geoff Dyer, DDA's director of development, have met with the owners and developer of the building, offering ideas on how to maximize the space and turn it into a property that, in the long term, will be attractive to young professionals. "We plan to help them envision what it will be like far into the future, and we're willing to help them on what it can be immediately in the present, but we haven't done anything yet," Norris says.

Before the demolition began, the interior at 221 Jefferson was low-ceilinged and labyrinthine, designed to compartmentalize departments - the newsroom, circulation, advertising, etc. - into silos. That, says Norris, is not what modern companies want, especially high-tech companies with young, urban-minded professionals.

"They want something that's a little funky and a little cool. If you made that building more akin to what an Apple store looks like than what the building looked like in 1970, then I think we're going to begin getting those workers who are craving this Downtown setting," Norris says.

Of course, JD Property Management owns the building and can do whatever it wants with it, and it will be occupied as office space by an as-yet unnamed company - that much seems certain.
But, notwithstanding that it's the largest commercial space in Downtown that isn't currently in commerce, the old Advertiser building offers Norris and Dyer a first crack at applying on a large scale the urban design philosophies they hold dear, which is by and large why Norris was hired 20 months ago and why he brought Dyer on in September of last year.

For Norris, that begins with opening up the façade, letting in light and allowing the interior to interact with the street.

"That's what people who want to be in a downtown area want to see - they want to see other humans doing stuff; that's why the buildings that are the most transparent are the ones we naturally gravitate to," he says.

Regardless of the building's short-term use, Van Eaton agrees it has lots of long-term potential: "It should be one of the most unique buildings in Downtown Lafayette when it's completed."